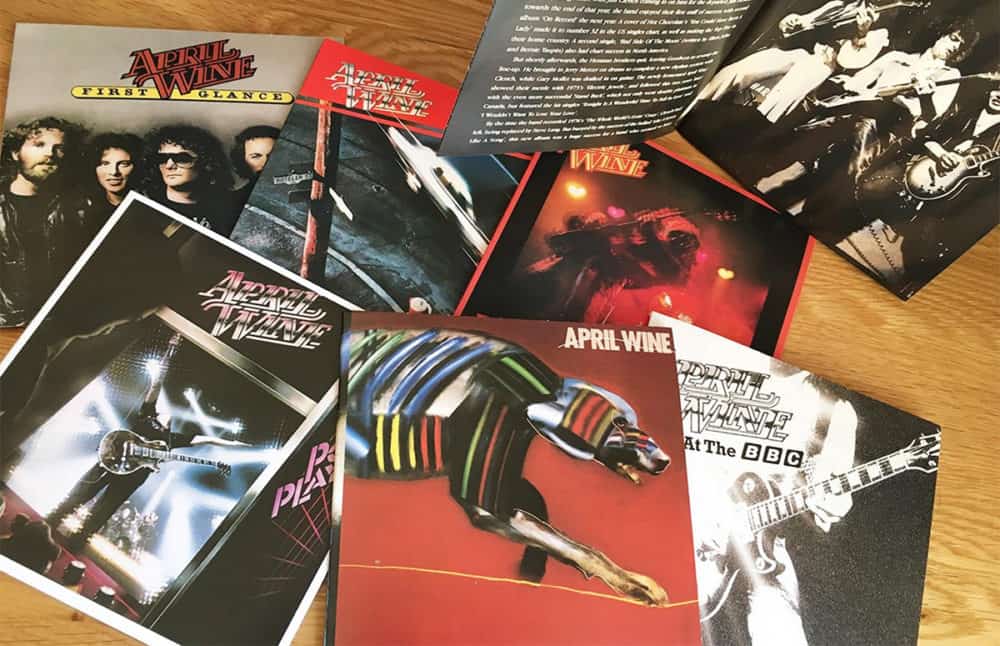 Think of Canadian rock bands and Rush probably spring to mind, as would Steppenwolf and Triumph. All fantastic bands. That’s not to take anything away from April Wine, who in terms of output (if not success), must rank alongside the aforementioned. Classic hard rock that is really worth checking out.

April wine have had many ups and downs, commercially and personally, with a number of personnel passing through the ranks.

Relocating to Montreal, April Wine’s eponymous debut was released in 1971, originally locally on the Aquarius label, and quickly established Goodwyn as a dominant creative force within the band. On Record followed, with Jim Clench coming in on bass. Electric Jewells followed in 1973, now with Goodwyn as the sole remaining original member.
Stand Back and The Whole World’s Goin’ Crazy followed, attaining Platinum status in their native Canada.
By 1978’s First Glance, the band’s seventh studio album (a couple of live albums along the way too), the band were starting to get serious international recognition. Alongside guitarist/vocalist/keyboard player Goodwyn were bassist Steve Lang, guitarists/vocalists Brian Greenway and Gary Moffet, and drummer Jerry Mercer.

First Glance was the band’s first gold record outside of Canada, and rightfully so. The album here (track lists and artwork often varied inside and outside of Canada) kicks off with Get Ready For Love. The triple guitar adds a serious punch, Goodwyn’s production is clear and solid. That opening track features some serious riffage with a decent guitar solo or two mixed in. Hot On The Wheels Of Love could influence of many, and Roller was a hit in the US. Rock’n’Roll Is A Vicious Game is more mellow track. Throughout the album the odd touch of keyboards and slide guitar add a decent touch.

As international success built, 1979s Harder Faster saw the same track list / art on all versions. Opener I Like To Rock was a hit in the US, and saw similar 3 pronged guitar interplay. There’s also a serious nod to The Rolling Stones (a few plagiaristic bars).

Unlike many Southern Rock bands who took the triple guitar in an Americana direction, here it all builds. Even on the mellower tracks like Say Hello there’s some decent work. Although the album’s a little short at 32 minutes, there’s a very strong 6 minute cover of King Crimson’s 21st Century Schizoid Man. Fantastic.

1981’s Nature Of The Beast is perhaps the band’s best known album, and is essential listening. Recorded in the UK after a European tour, there is an AOR nod, with opener All Over Town hinting to fellow Canadian’s Rush, in a more ballsy manner. Another top rocker is Tellin’ Me Lies, a hint of Triumph and it’s all good stuff. There’s some searing guitar on Sign Of The Gypsy Queen, melodic and rocking too. There’s a couple of bonus live tracks on this disc too!

1982’s Power Play was more blistering, kicking off with the uptempo rocking Anything You Want You Got It. It’s a serious arse kicking track. The album didn’t meet the critical acclaim of the previous album, but it’s still wonderful set. There is a polish that takes the edge of some tracks, compared to the previous album in particular. No slide, just largely good rocking. The odd track like If You See Kay drift (in a commercially pleasant way) by comparison. There is a good if gentle cover of the Lennon / McCartney track Tell Me Why though.

1984’s Animal Grace was the band’s eleventh studio set and the last one of this set, finishes the period nicely. The band had had a stable period and although it’s a little more polished, rather more typically 80s, there’s still some great album. Opener This Could Be The Right One is both a rocked to get you nodding and melodic enough for the rock charts.
Sons Of Pioneers follows suit nicely, the whole album is a damn fine listen if not in the Nature Of The Beast league. The bite may have lessened but there’s still some great tracks here, Myles Goodwyn’s song writing as good as ever.

The final disc is a live set from 1980, recorded the same year as they appeared at the inaugural Monsters Of Rock. This one, recorded in Reading (a club, not the festival) is a BBC recorded although it does have an official bootleg feel. The opener Oowatanite (an earlier song) gets a rapturous response and rightly so, despite the distortion. Totally blistering. Get Ready For Love and I Like To Rock all blow the place down, and there’s that cracking King Crimson cover too. Brave? Yes. But worth it. If you want to do demented hard rock, this is it.

Post 1984 the band lasted another album and line-up change before going their separate ways, and reforming. Like the early material, it’s good and worth checking out, but doesn’t come close to the studio albums featured here.

Six CDs in card sleeves with a well annotated booklet, all in a box; bar a few extras and singles that could (SHOULD) have been included with each studio set, and maybe a better recorded live set, this is a near perfect collection of April Wine’s creatively and commercially most productive period.
Essential listening? Yes. 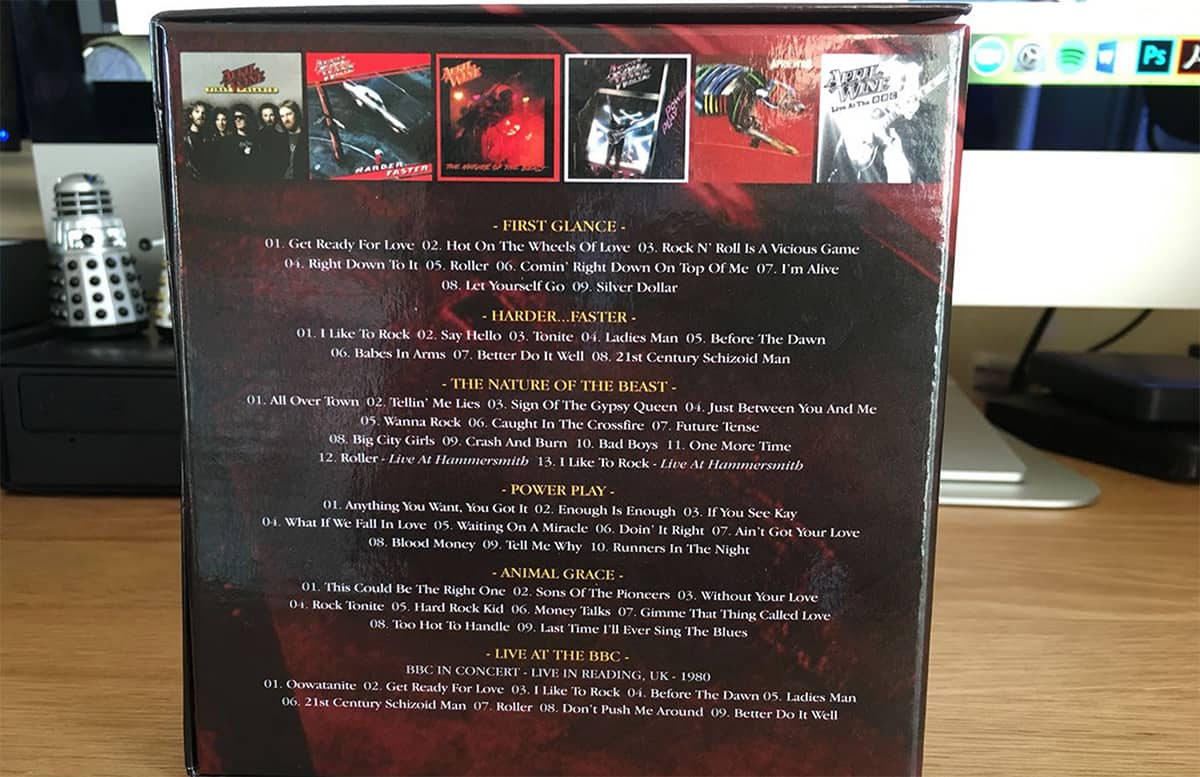 Hi Joe, As a Canadian who has followed April Wine’s career from their start, I prefer their early LP’s. By the late 70’s, Wine were “just another” classic rock band. Their most creative and interesting recordings were in their early years prior to the CD’s that are shown in that box set. I first saw April Wine Live in September 1973 when they blew Marc Bolan and T-Rex off the state. I then saw them play in a high school gym in June 1974, one of the best live performances that I’d witnessed. I saw April Wine one more time in a hockey arena in 1976 but the venue didn’t compliment the band. I do have those later CD’s on vinyl but they don’t get played as often as their early LP’s.