Here is the 4th of the 6 unboxing videos looking at the Be Bop Deluxe – Super Deluxe Edition Box Sets from Esoteric Recordings and Cherry Red Records. This one looks at Modern Music from 1976 and as with the others in the series, I am joined by Chris Wright. Phil Aston

This is another fantastic addition and a great asset to Esoteric Recordings’ remarkable Be-Bop Deluxe reissue programme of the past few years.

Released back in 2019, and now just starting to become more challenging to track down, the 4CD/1DVD Modern Music Limited Edition Deluxe Box Set conforms to the already well-established format for these ultimate Be Bop packages.

Modern Music was my entry point into the world of Bill Nelson and the band at the end of 1976, following the October release of the album that year.

A considerable stylistic progression from Sunburst Finish, released in January of the same year, the album’s fulcrum is the magnificent Modern Music Suite, which was inspired by Bill’s not altogether positive experiences of touring in America, which the band toured extensively in this era.

And it’s probably fair to say that the release of the record coincided with Bill’s increasing frustration with the seemingly endless tour-album-tour cycle that ultimately led him to pursue a very different, more studio-based artistic direction.

So, in some ways, what we’re hearing on Modern Music is the ultimate expression of Be Bop as a reasonably conventional rock band, compared with the, well, drastically different stylings on the appropriately-titled next studio album Drastic Plastic.

The package here is once again overwhelming for the avid Be Bop Deluxe devotee.

CD1 features the original stereo mix, together with Shine, a track that featured on the B Side of the Kiss Of Light single and which was to quickly become a staple of live performances, as we will see when we look at the epic Live In The Air Age box.

CD2 contains Stephen W. Tayler’s superb remix of the album from the original multi-track tapes, which I have to say I very much prefer to the always slightly muddy sonics of the original mix. In reality, this is the audio makeover treatment that Modern Music has needed for decades and it’s thrilling to hear it with such clarity. This disc also contains new stereo mixes of Shine and the first versions of Forbidden Lovers and The Bird Charmer’s Destiny.

CD3 is, I think, one of the real highlights of this set. It features a BBC Radio One “In Concert” recording of the band’s final date of the autumn UK tour supporting the new album, at the Hammersmith Odeon on October 2nd 1976. The quality of the recording is pretty exceptional and Bill’s vocals are especially well realised, giving a real sense of the acoustic of this celebrated London venue. I’d go as far as to say this is one of the very best individual discs in the entire reissue series.

CD4 is called The Official Bootleg. It features a concert recorded for radio at Chicago’s Riviera Theatre on March 26th, 1976. This is a special performance, though it lacks the punch and extreme clarity of the Hammersmith recording. The version of Futurama’s opening track Stage Whispers is to die for and there’s also an airing here for an otherwise unreleased blues jam called Bill’s Blues, which provides a wonderful showcase for these four great musicians to really show their capabilities.

The fifth disc is another DVD offering, as seen in the other box sets, providing a 5.1 surround mix of the album, together with high resolution (96KHZ/24-Bit) versions of both the new and original album mixes, plus the extra tracks also featured in CD2. Visual content is well worth owning, being the 1976 Old Grey Whistle Test performances of Forbidden Lovers and the soon-to-become in-concert favourite Down On Terminal Street. Lovely to have those in excellent quality.

The supporting 68-page book contains another essay by Bill with his fascinating thoughts on the Modern Music era, together with an essay by Esoteric label manager Mark Powell and some truly wonderful in-period photographs, including extensive shots from the album photo session. Another stunning feature is the reproduction of Bill’s handwritten original lyrics. There’s also a Modern Music poster and the usual, for this series, four colour postcards.

It’s another utterly essential purchase for fans of the band and, if your interest in Be Bop Deluxe has been piqued by the series, it will bring you right up to speed with the band at this peak moment. 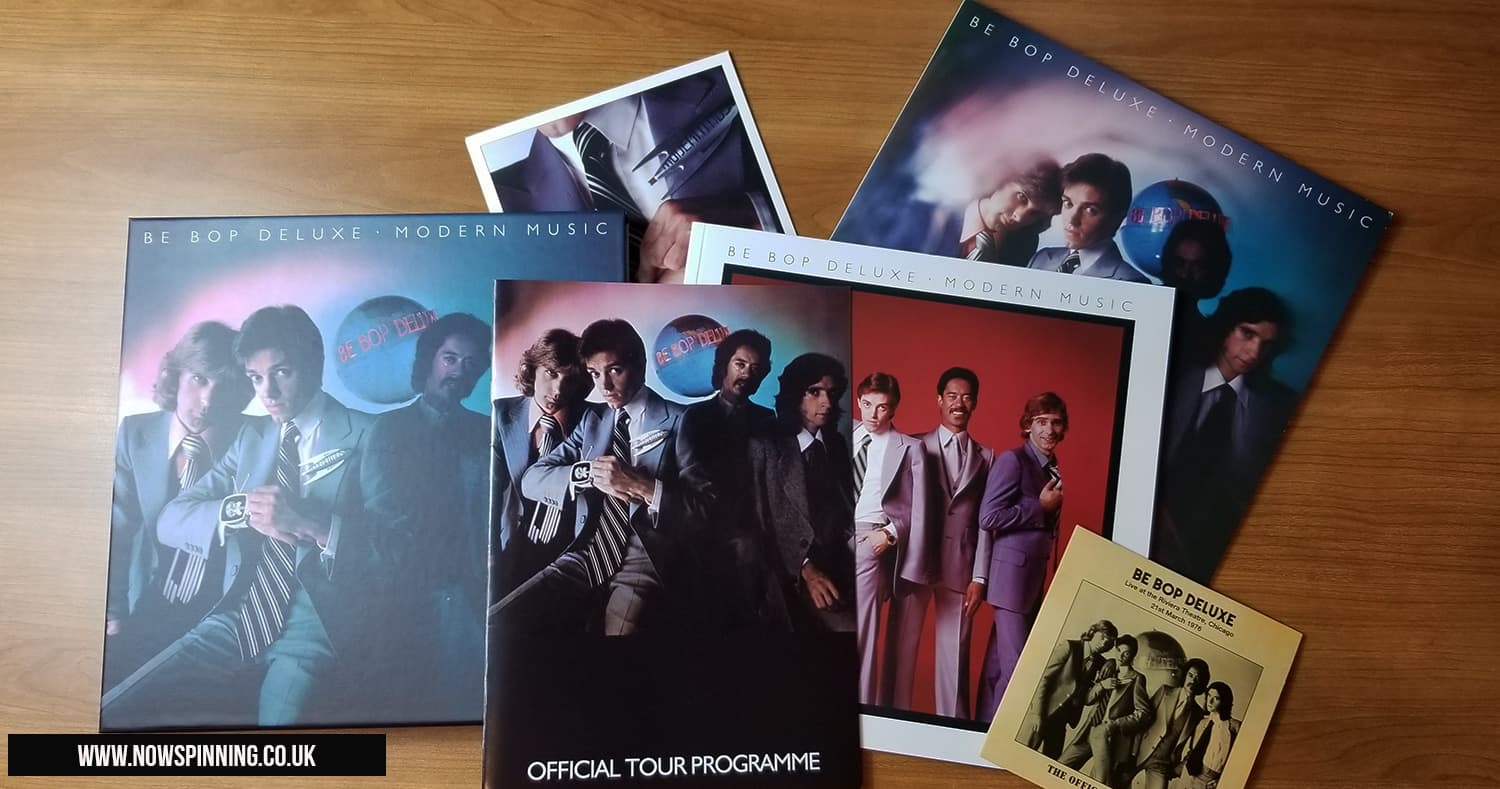 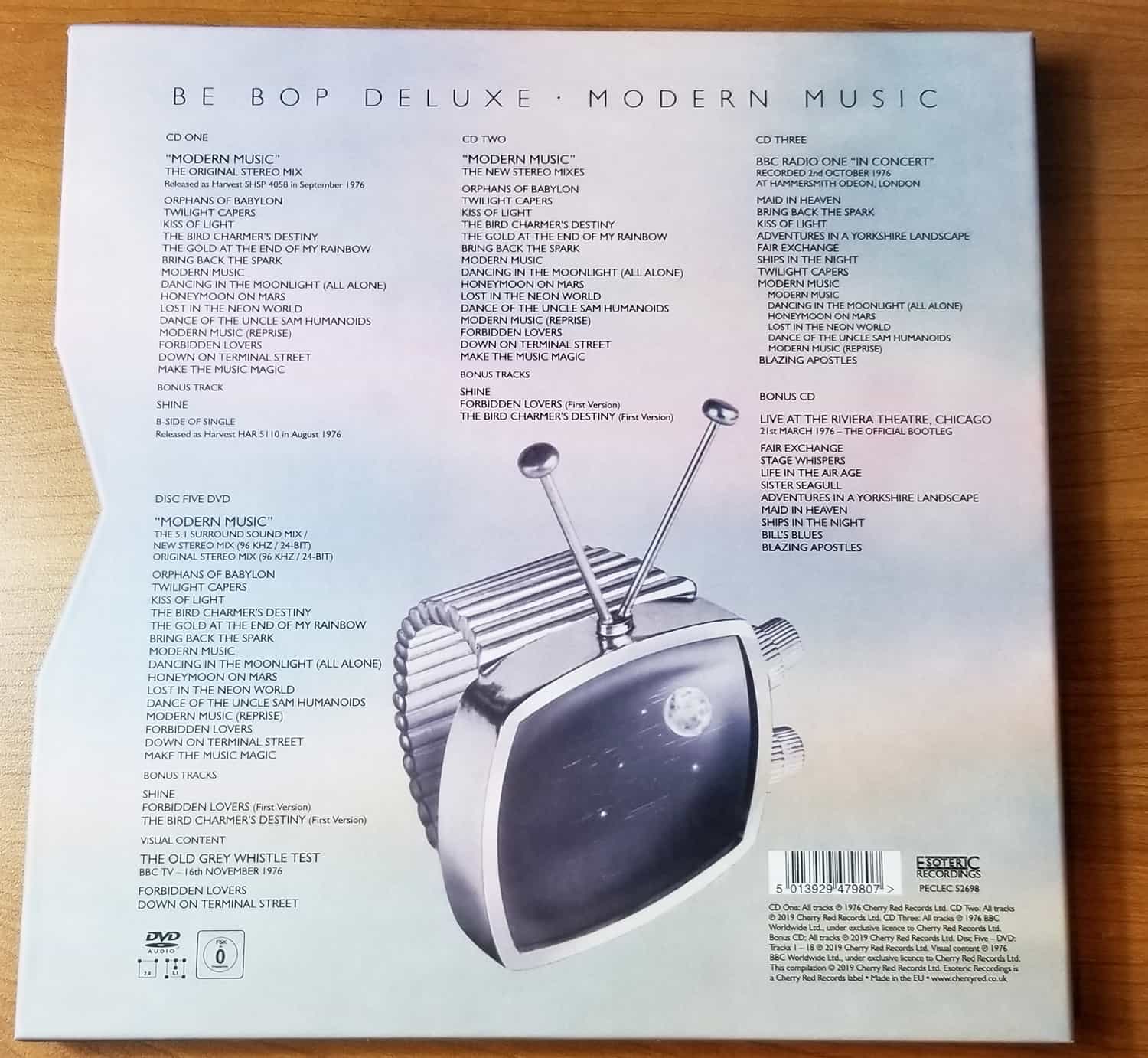 I have all of these sets (worth noting they’re reissue Sunburst Finish after it sold out). They’re truly magic in every way. With rumours of a Red Noise box to come, we could be in for one of the better box set series of all time. I mean, who thought we’d ever get these things with a Surround mix?!?