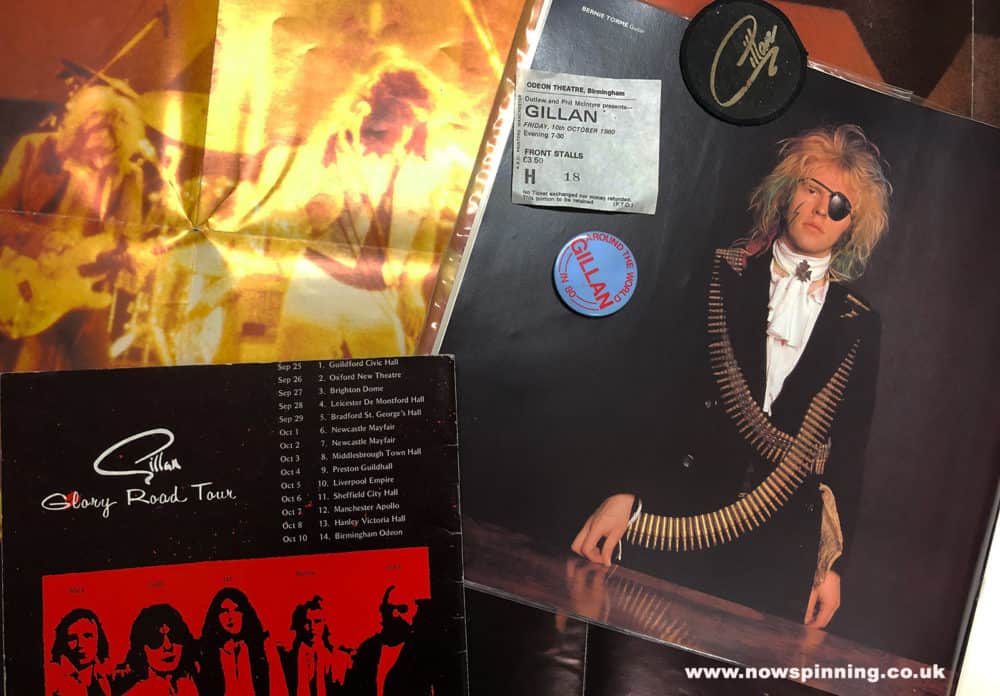 As many of you know, I am quite fond of Deep Purple and the many musicians who have played in that band or became connected with it.

Rather than being upset when Purple called it a day in 1976 I was delighted because instead of waiting 2-3 years for one band to tour, I now had Gillan, Whitesnake and Rainbow touring every year.

Although I was a fan of all three bands it was the Gillan Band that had the edge.  There was something chaotic and unique about them and it was the personality of each musician that gave Gillan the edge.

There was Colin Towns the serious composer and jazz player, John McCoy the scary bass player with half a shaved head, Ian Gillan, Mick Underwood and then there was Bernie Torme on guitar.

In 1978 Eddie Van Halen had arrived and every guitarist wanted to be him, it was technical and complex, many aspiring lead guitarists were just about technique back then.

Bernie Torme was different.  He had played in a punk band, he followed no rule book, his guitar sound was like no other and he followed his own path.

Wanting to hear something by the new lineup I went out and bought the single Vengeance.  The B Side was Smoke on The Water.  This was like no other version you would ever hear.  The guitar sounded like a dying horse being amplified through a broken Marshall stack.  It was wild and I loved it.

I bought Mr Universe and just loved that even more, Secret of the Dance, Roller, the title track, it was (and still is) a classic album.  Glory Road was next and then Future Shock.  Each of these albums had an almost garage-style production, rough and ready but with a true rock and roll heart.

I saw them on every tour during this period and Bernie Torme was just brilliant, his punk, Hendrix tremolo dive bombs souring through the music like guided missiles, each one seeking out the young ears in the audience.

Bernie also looked the part, part pirate, part desperado and whirling around the stage, bumping into a pogoing John McCoy and throwing the best guitar shapes ever.

Hearing that Bernie had passed away from complications with the Flu is very sad.  He was still making great music and those Gillan albums will live on as a testament to the talent he was.

The first time I ever heard Bernie’s playing was on the Friday Rock Show, when Tommy Vance aired the set that Gillan played that summer at the Reading Festival on 25th August 1979. It was about 6 weeks before the release of ‘Mr. Universe’ and I was blown away by Bernie’s ‘white noise’ screaming guitar style. I must have played that tape hundreds of times, but until today, not for a very long time but, by the miracle of the internet, you too can now hear what I heard in 1979 on Youtube .

I was so taken by the band I got tickets to see them on the Mr. Universe tour at Preston Guildhall in ’79; My second ever gig.
It was awesome. And by this time I probably still wasn’t that much of a Deep Purple fan. I’d only begun seriously buying music earlier that year. I had much to learn!

I bought ‘Glory Road’ when it came out, but it was always about ‘Mr. Universe’ for me and the title track in particular with Bernie’s extended solo being the star attraction. Although to be fair, the line up of the band in total was just awesome at that time.

After Bernie left Gillan I saw him play at ‘Stairways’ in Birkenhead. Small dark, sweaty clubs were where Bernie called ‘home’. I don’t remember the full line up of the band, but I remember he had Chris Heilman on bass, who went on to play in Shark Island and I think it was when Phil Lewis (of Girl and LA Guns) was singing for Bernie. I picked up this copy of ‘Turn Out The Lights’ for the disgustingly cheap price of £1.25 many years ago. ‘Bargain bin Bernie’! Pretty tragic. But that cover image is how I remember Bernie with his semi-goth/glam/punk look and sounding like Jimi Hendrix playing the New York Dolls!

Around 12 months ago, on one of the music pages I follow on Facebook, someone posted up a three CD set that Bernie had released of solo material, ‘Dublin Cowboy’. I tried to order a copy but some technical glitch stopped the order and I forgot to re-try it. Very much regretting that today and feel I should put that error right.

Bernie Torme was a star that shone brightly in small dark places, and never really seemed to get the recognition he deserved. Gillan is probably the closest he came, bar that brief experience with Ozzy Osbourne before Brad Gillis stepped in…also briefly! He will be missed.

To read a far better history of the man than I have provided here, click this wikipedia link…
https://en.m.wikipedia.org/wiki/Bernie_Torm%C3%A9

I will always remember him best for this, ‘Mr. Universe’