I am going to give my own personal feelings about what this album means to me and how I discovered it.  In some respects, it is how I discovered Black Sabbath.  I think I first heard this in 1973 when I was 14 at a friend’s house after school, it was owned by his older brother.  Like what Machine Head became for Deep Purple, the album Paranoid became the bedrock for their setlist from this point on.

It is hard to imagine the progress they made from the first Black Sabbath album. They were inventing a new genre.  I can remember the first time I heard War Pigs. The fact that I could hear Tony Iommi’s fingers sliding up and down his fretboard as he played those bar chords made it feel like he was in the room with me. Can you imagine now on albums if you could hear this, someone would use some digital technology to remove it!

To me, this just added to the authenticity of just basically three instruments and a voice.  Then there are Geezer Butler’s lyrics. I know he became almost like a poet by Sabbath Bloody Sabbath but even here his lyrics and vision is just timeless.

War Pigs is just incredible, I was 14, I was not interested in songs about love and flowers, I wanted something more guttural. This was a song about war, about the ordinary people going over the top while the Generals stayed safe and out of sight. It could be about any conflict going on in the world today! The lyrics and the delivery by Ozzy Ozbourne blend perfectly with the riffs from Tony Iommi while connecting with Geezers Butler’s rumbling bass and Bill Ward’s really jazzy drumming.

This is Black Sabbath, that opening with the air raid siren and then the guitars thundering in like an oppressive avalanche of sound. It is just an amazing track and sounds just as powerful now as it did then.

Next up was the single and title track Paranoid which used to be played at school discos, along with Black Night by Deep Purple. This single itself was louder than any other single I owned and I felt I understood the lyrics even if I had never had a girlfriend at the time.

The only track I didn’t like so much at the time (which is typical being a 14-year-old kid) was Planet Caravan because I didn’t really understand the kind of subtleties behind what they were doing. Of course, now I love it and I obviously have done for decades, but back then it was the track I played the least.

Next up was Iron Man. This is what Heavy Metal is and to me defines it. It is the template for Heavy Metal and riff-based rock. The melody line follows the riff and the song follows this pattern until it is time to shift gear and again the guitar riff dictates the vocal delivery. The song also is about a metal robot from the future, so Sci Fi and a very heavy message!

Electric Funeral had a riff I could play on one string (which meant a lot to me when I bought my first guitar!) This was another song warning us that all was not well with the world. This then leads into my favourite track from the album Hand of Doom. The template of songs almost being played in sections is again in evidence here as the track moves from a slow menace with Ozzy Osbourne’s delivery about drugs misuse and the Vietnam war, to faster and heavier sections. I can honestly say if I had any interest in drugs in my young and impressionable mind they were extinguished at this point.

Rat Salad was really a vehicle for a drum solo from Bill Ward, and then we are heading off for a jazzy blues shuffle that is Fairies Wear Boots. This is another great track and the song title fitted in with the look and feel of the whole album.

Paranoid was also made at a time when stereo was still new and guitar solos panned across your ears from left to right and back again. Modern rock albums almost sound Mono compared to this.

My first vinyl copy was on the WWA Records Label. I missed the Vertigo version but this never bothered me as this is my original first copy bought when I was at school. I loved the laminated sleeve and the band as they appear in the gatefold. So many of my mates wanted a star top like Bill Ward. Then there is Ozzy Ozbourne separate from the rest of the band (the shape of things to come?) and looking as hard as nails looking down on the cameraman.

I bought the single on the Vertigo label from Reddington’s Rare Records in Birmingham and also the songbook to try and learn a few Sabbath riffs. The Songbook includes a few photos that would influence how heavy metal bands were photographed (usually in the woods) for years to come.

As regards the various CD versions that are available I would recommend the 2CD/ DVD version which you can pick up quite easily or if your budget allows, it the more recent Super Deluxe Box Set. If the Box Set had included the DVD of the Quad mix then this would have made the earlier one redundant. It seems a shame they did not include this. I did think the folded down to stereo mix from the Quad version (released in 1974) would be pointless, but the mix is very different and well worth having. The two live CDs from the box set are also excellent and worth it for the live versions of Hand of Doom.

The final part of my Paranoid collection is my Paranoid shoes from Dr Martens! I love these and they also include a metal ‘Henry’ on the laces.

So there we have Paranoid by Black Sabbath, four young guys, creating a new musical landscape, a new genre of music that we now know as Heavy Metal, and it still sounds amazing.

Please subscribe and support Now Spinning from just £3/$3 per month. 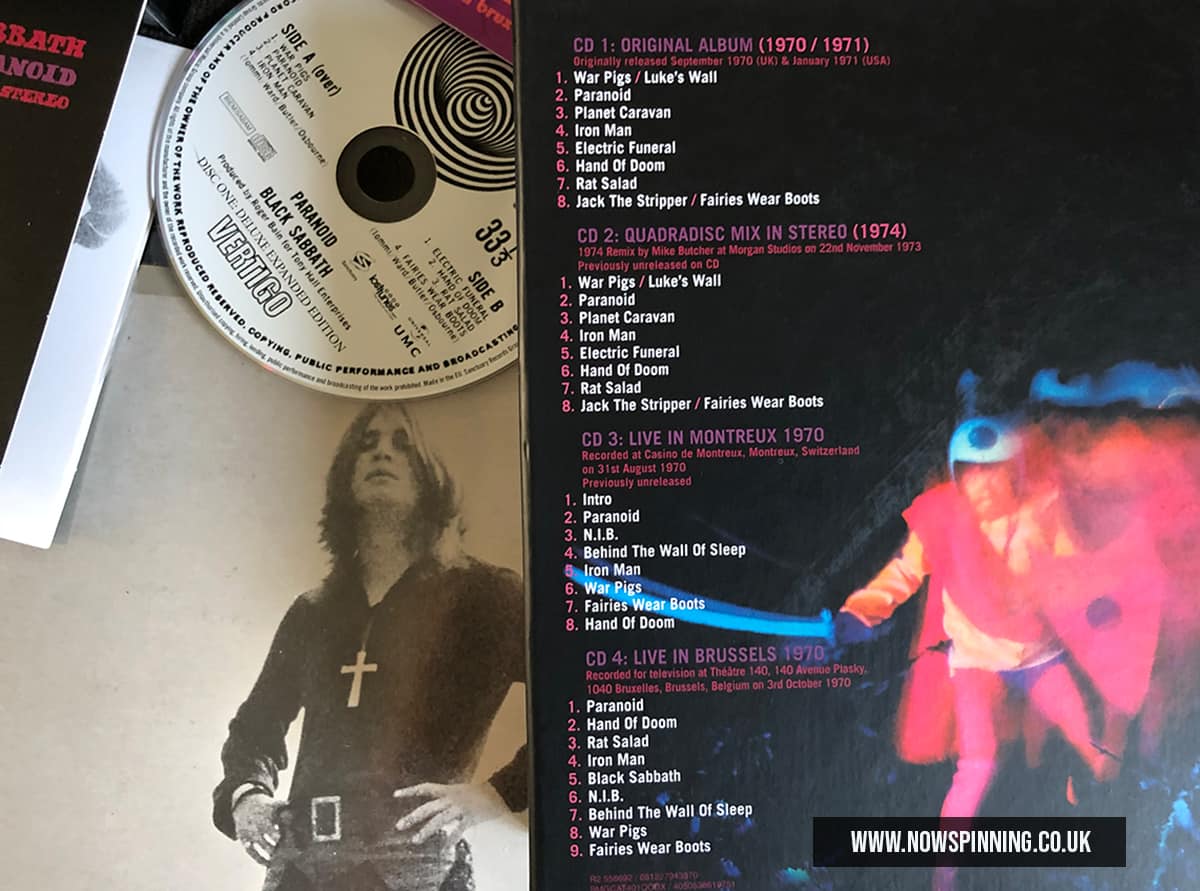