This is my review of the 2021 Super Deluxe Edition. As with my other reviews of this series, I also compare the newly remastered edition with the previous remastered CDs and the original vinyl. So is this a disappointment like the Sabotage set or is it an essential purchase for Black Sabbath fans and rock fans in general? …And what about the Steven Wilson remixes and the live CD? watch the video to find out!

1976, and it was a difficult time for the fathers of Heavy Metal; they would have been damned whatever they did. Times they were a changing, for it was the year that punk was really taking off, and bands like The Eagles and Fleetwood were recording their most commercial sounding and subsequently most successful albums. Queen and AC/DC were establishing themselves too. Add in the fact that band had just recovered from the legal issues surrounding the previous album (Sabotage – hence the album’s name) and manager Don Arden was concentrating more on ELO, and not only were the band coked off of their collective tits, it’s a miracle we got an album at all that year. And coupled with the fact that the band were pretty much left to complete (and produce) the album themselves, it turned out surprisingly bloody well.

Yes, I’ll admit it, I love this album. And I’ll also admit that I go against the “Resistance to change” that many fans appear to exhibit. Not only had Sabbath pretty much invented heavy metal, they had taken their doom, blues and stoner roots as far as they could, and were in danger of re-treading old ground. Guitarist Tony Iommi, who was pretty much left to produce the album, wanted a change of direction. I feel that was needed, a bold move and not as misguided as many critics would have us believe at the time.

The album was recorded in Miami, where some took it as a holiday rather than a recording session, there are stories of being unsure of direction. But that didn’t stop the band producing some damn fine songs. Drink, drugs and fractured relationships may have affected the tour (where they were often matched or bettered by support band AC/DC), but that in no way means the record has no value. It does. OK it’s different, but it’s a marvellous listen.

The fourpiece of vocalist Ozzy, guitarist Iommi, bassist Geezer Butler and drummer Bill Ward, were here supported by keyboard player Gerald Woodruffe, kicked off the album with the raging Back Street Kids. Yes a couple of cliched infills but still a solid upbeat track. And breaking with earlier albums there are the first hints of a commercial edge. There’s a solid rhythm from Ward and Butler while Iommi provides a solo as well as riffs. Then there’s You Won’t Change Me which is slower and chunkier – and the keyboard works well here. The lighter It’s Alright is sung by Bill Ward and is surprisingly good – It is a more straight rock oriented tack with a commercial nod but Ward’s voice suits it well.

Side one closes with Gypsy, where there is a solid riff and upbeat drumming. Later, All Moving Parts Stand Still has a funk metal feel, and the orchestrated ballad She’s Gone provides a nice balance. To me the best track is the 7 minute closer Dirty Women. And they keyboards on the album are not overdone, but where they are used they add an extra dimension, freeing up Iommi.

While it is not on par with the band’s earlier efforts it is different enough to warrant appraisal in its own right. The biggest issue is that the album didn’t hit the zeitgeist upon release, resulting in mixed reviews that have tarnished the legacy. In hindsight, they pulled one out of the bag, perhaps accidently (after the recording Osbourne went into rehab and would be temporarily replaced by Dave Walker). I still listen to this album regularly and this remaster shows why there are so many good (if sometimes cliched) points.

On to the package; the 4 CDs come in card sleeves, the original album replicating the original insert. The second disc is a new mix of the album; there are some differences that I won’t go into hear, they are best enjoyed at home on a decent system, and yes there is (again) much to love. Likewise with disc 3, alternate mixes and outtakes.
What many will love is disc 4, a live show from the 76/77 world tour. There is a bootleg edge to the sound, but Symptom Of The Universe is as good a set opener as any. The band may not have been quite on the ball but to have this released officially is a definite bonus.

The box also contains a replica tour program and a large poster. Then there’s the hardback book that comes with it – sleevenotes, press cuttings, and rare records from around the world, it is just fantastic.

Like the earlier deluxe box sets, BMG have set a new standard, with both packaging and content.
Love it.

Phil Aston will be doing a video/unboxing review soon 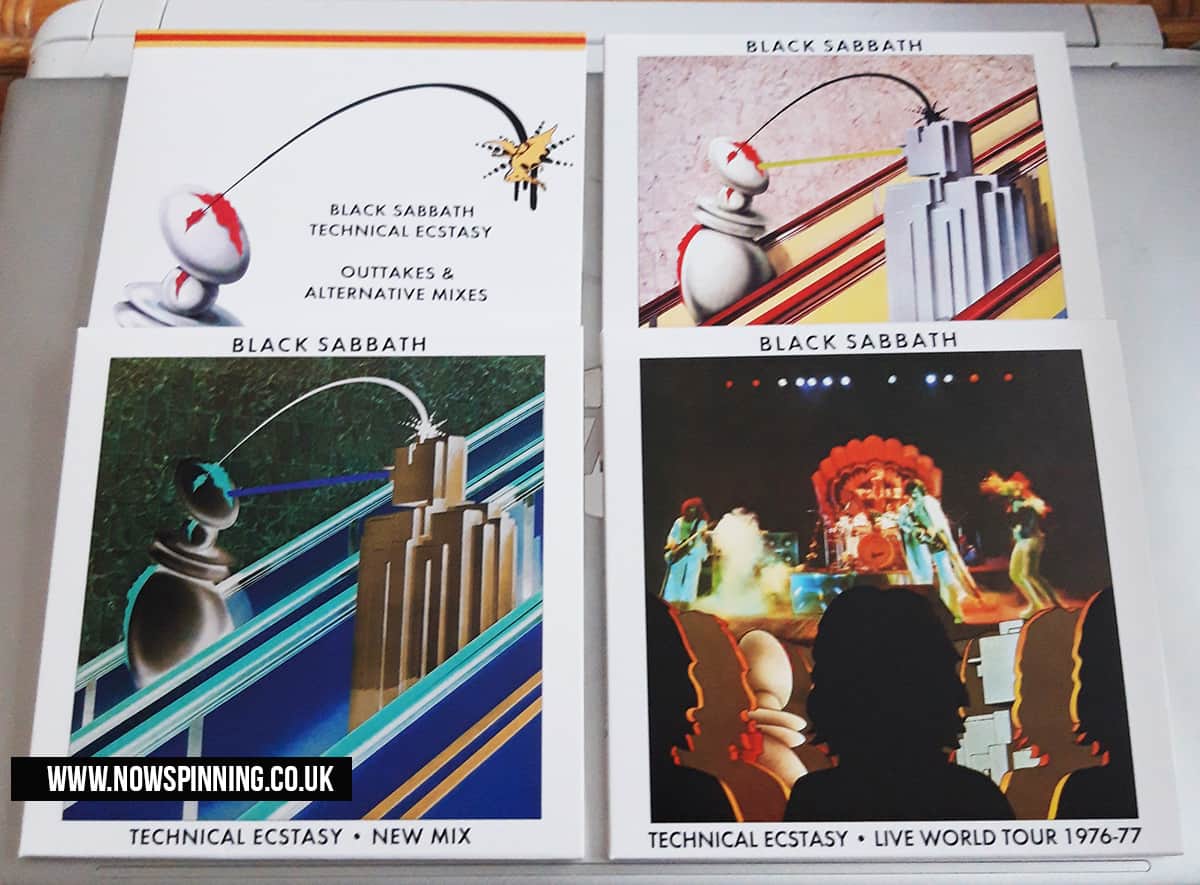 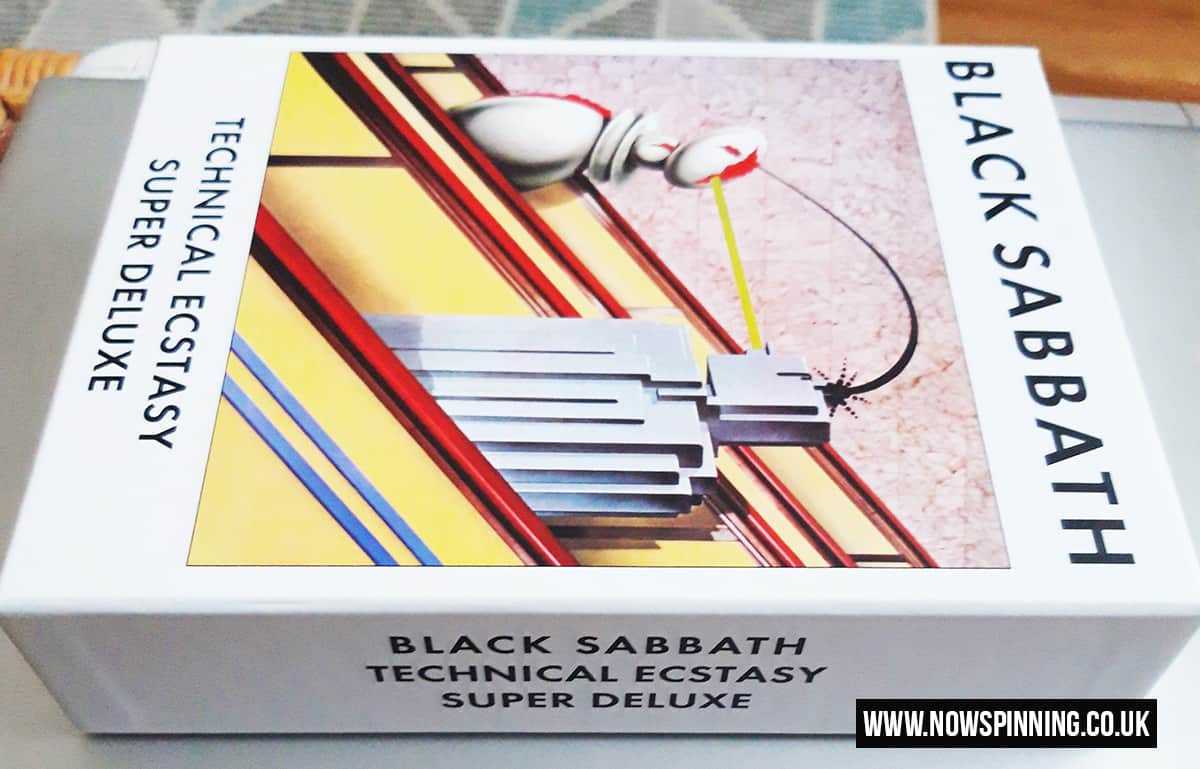