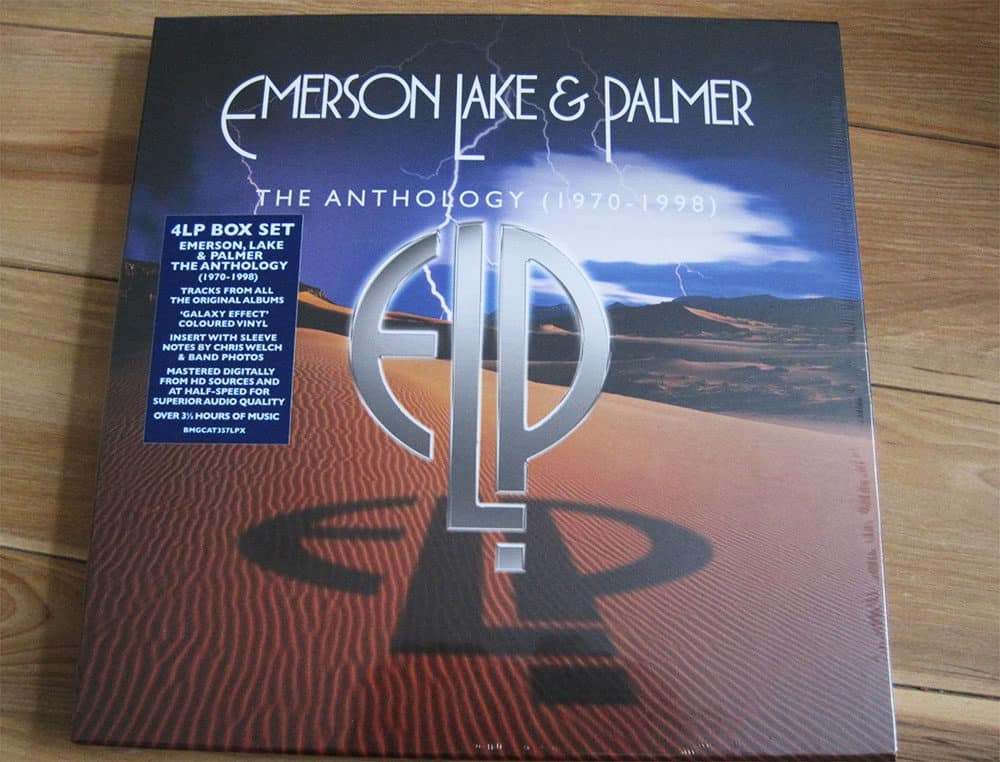 Prog rock legends ELP, a supergroup featuring keyboard player Keith Emerson, vocalist guitarist and bassist Greg Lake and drummer Carl Palmer, made a big impact on the world when they formed in 1970. In their initial 5 year run, or 10 until their split, the trio much maligned yet equally loved (in secret) by punks, a world-wide legacy.
A reformation or two later, and there’s quite a solid discography.

Much reissued and compiled, there’s plenty of quality if you know where to look. And. many a compilation worth passing over. Not this one though. On account of the packaging alone it’s a pretty fantastic box.

Covering their studio work and a couple of officially released live tracks, here we have 4 LPs on a solid and galaxy effect coloured vinyl, each in a sleeve and innersleeve. And there’s the 12” booklet with plenty of photos and annotation from Chris Welch.

The band were formed when King Crimson (featuring Greg Lake) and The Nice (Keith Emerson) crossed paths on the road, and with the addition of Carl Palmer (then of Atomic Rooster), ELP were born.

Their 1970 eponymous debut, with cuts on disc 1 side 1 here, mixed light and more whimsical prog with some harder edged numbers.

The 1971 follow-up cemented both success and sound, epitomised by the 21 minute side-spanning title track. That, with Bitches Crystal and A Time And A Place are on side 2 here and take things up a notch or three from the debut. The interplay between the three individuals showcase the chemistry the band had, what made them special.

Excerpts from the live Pictures At An Exhibition take up disc 2 side 1, and wonderful classical music turned prog rock, and includes the cover of Nutrocker.

Disc 2 side 2 features tracks from Trilogy, another wonderful and faultless prog album with plenty of classical undertones.

Disc 3 side 1 and we’re on to the band’s magnum opus, in Brain Salad Surgery. Given that the epic Karn Evil 9 spanned a side and a half we weren’t going to get the whole thing here but we do get the 1st Impressing (parts I & II), and the excellent reworking of Jerusalem. The side finishes with the live Toccata (taken from the classic Welcome Back My Friends triple LP).

After a short break, the band came back with the lovely if disjointed Works Vol 1, a double LP that featured a solo side each and the 4th side a band effort. A couple of tracks here, including the surprise hit Fanfare For The Common Man.

The Works Vol 2 album was more a collection of leftovers and solo tracks and is represented by two solo hits in Keith Emerson’s Honky Tonk Train Blues and Greg Lakes I Believe In Father Christmas. Fitting tracks indeed.
The band split in the late 70s, and went out with the (in comparison to their earlier work) weaker Love Beach, and the live In Concert (the latter later expanded to Works Live). A track or two from each, that doesn’t mean to say the albums should be ignored – the are ALL worth checking out.
The final side features the 90s reformation, 5 from 2 studio albums and a live track.

Some great music, and while the music is from digital sources, it has been half speed mastered, it’s as good as you’ll get without going back to the original analogue sources. From the vinyl to the sleeves, the booklet and the heavy duty box, everything about this set screams quality. Overindulgent, but then back in the mid 70s, ELP were. Fitting.
This set is to be enjoyed, music and packaging alike. 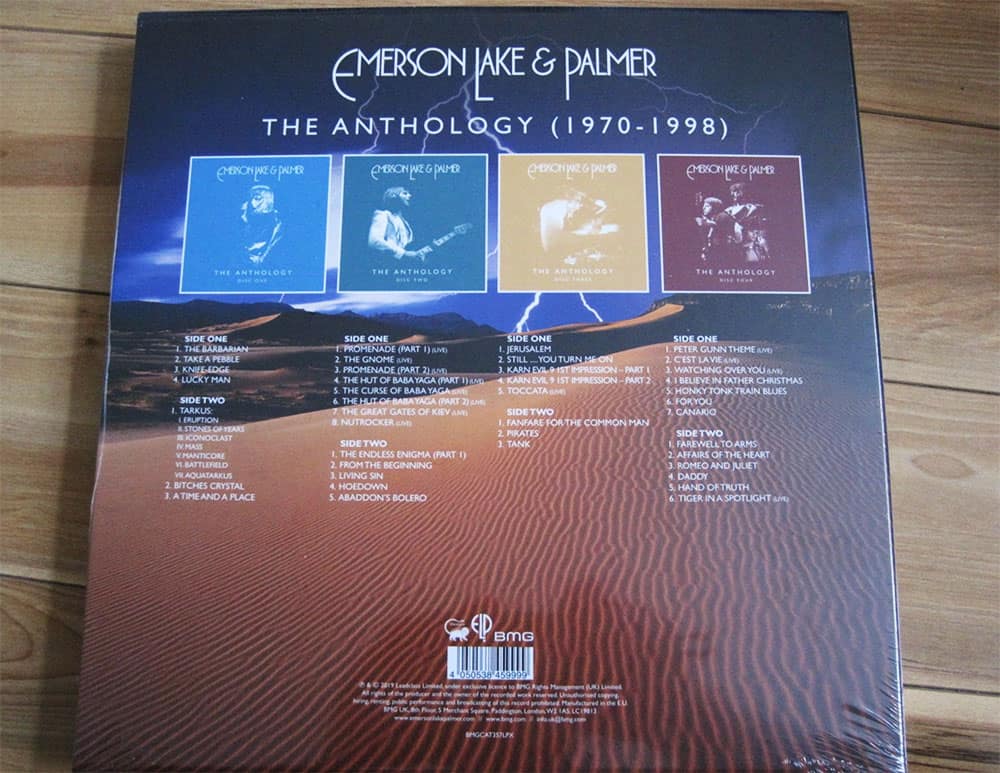 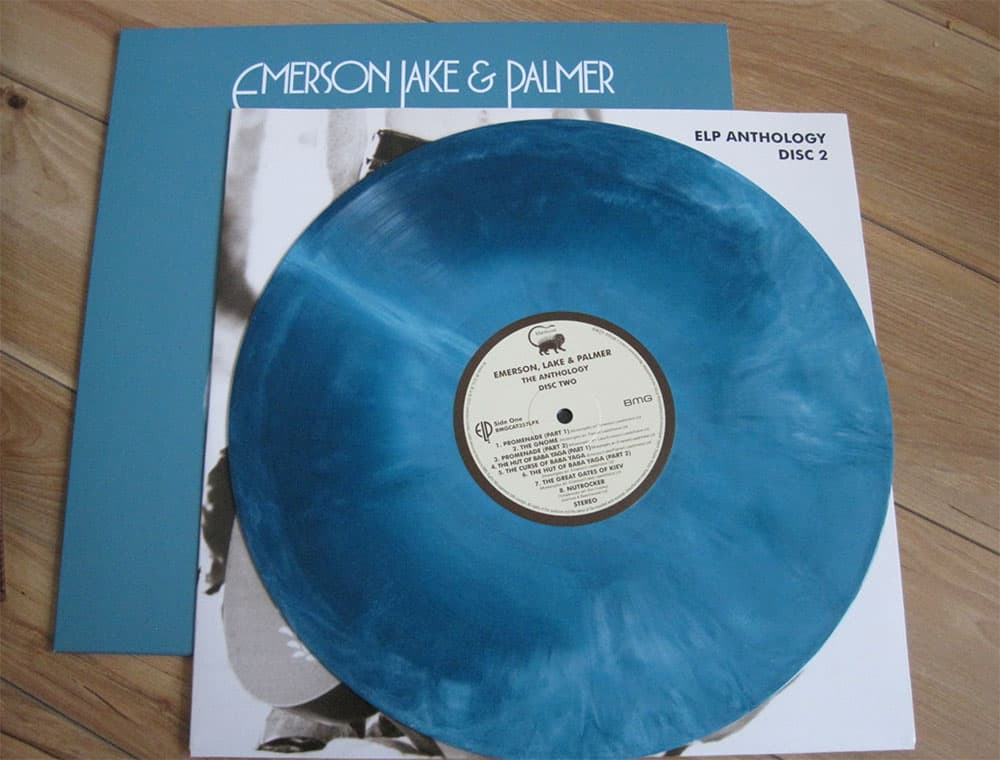