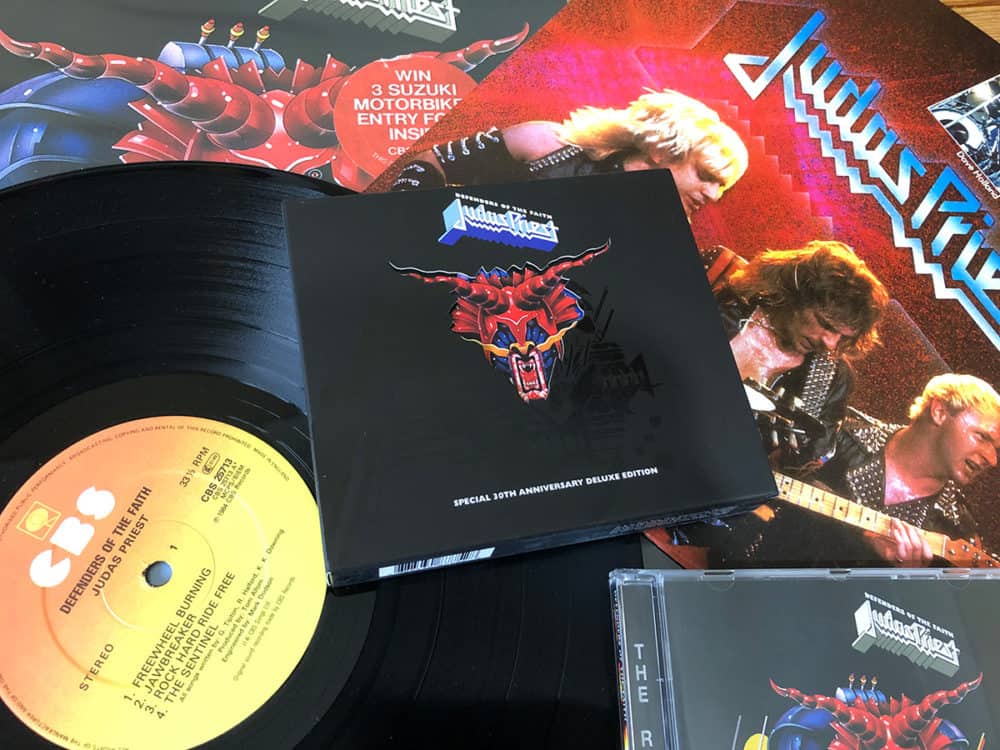 Heavy metal pioneers Judas Priest are one of England’s leading exponents of heavy metal and have influenced many, since their 1974 debut album Rocka Rolla.
Priest originally formed in 1969, the same year that fellow Birmingham band Earth became Black Sabbath; and while Sabbath are widely considered to be the originators of heavy metal, Judas Priest were probably the first metal band to transcend the genre’s prog, blues or psychedelic roots and play a purer form.

This album, Defenders Of The Faith, was originally released in 1984, and the first Judas Priest album to get an original CD release. It also featured the classic line-up of singer Rob Halford, guitarists Glenn Tipton and KK Downing, bassist Ian Hill and drummer Dave Holland.

Signing to Gull, Rocka Rolla was released in 1974, with drummer John Hinch completing the line-up. Suffering from poor production and distribution, it didn’t sell well and isn’t considered a classic, with much of the material written during the Al Atkins days. The title track stands out, there are some seriously strong moments, but low sales affected the band on many levels.
The band toured as much as they could, and took on part time jobs given the restrictively low recording budget. Sad Wings Of Destiny followed in early 1976, with drummer Alan Moore and featured the classics (and live staples) Victim Of Changes and Ripper. A wide range of rock feels and a prog edge made this a stronger effort. Again much was written much earlier, and a cover of Joan Baez’s Diamonds And Rust was recorded and released later.

A growing fan base and critical reception meant things couldn’t continue at Gull and the band signed to CBS who, in seeing the potential, brought in producer Roger Glover. Diamonds And Rust and Sinner are two serious highlights from the album Sin After Sin. And the band’s reputation of a revolving door of drummers was kept up with session man Simon Phillips taking the stool.

The band’s fourth album, 1978’s Stained Class, saw a cleaner metal sound (if still dark in places) and, with drummer Les Binks, saw greater UK and European success (the band remained relatively low key in the US). Exciter saw the band push Rob Halford’s vocals to new extremes and the solos ripped and rocked too. There’s also a Spooky Tooth cover (Better By You Better Than Me), and the environmental oriented Savage. As for the controversy and fan suicide case over hidden meanings, let’s leave that for another day.

Skipping over the highly overdubbed Unleased In The East live set, British Steel was released in 1980 and could be (OK controversial angle, but think about it) considered the first true, pure, dry, direct metal album. The catchy metal single Breaking The Law featured along-side the likes of Metal Gods and Living After Midnight. 1981’s Point Of Entry built on the success, but moved in a more melodic direction and Heading Out On The Highway and Don’t Go were well received. Still, a tad disappointing compared to its predecessor.

Screaming For Vengeance, drummer Dave Holland now a rare regular fixture on the drum stool, saw a return to rock and metal, and this was their commercial breakthrough. Electric Eye, the title track and You’ve Got Another Thing Coming saw the pinnacle of screaming vocals and guitars epitomised.

And that brings us to this album, The Priest’s 9th studio album. A blistering set that is sometimes overlooked as a younger brother to Screaming For Vengeance. Unfair of course. Totally.
Recorded late in 1983 and released early 1984, the artwork of some kind of machine beast is distinctive, as is the Judas Priest logo.

Freewheel Burning opens the set with vocals and guitars that hit you in the face like a sledgehammer and shred your ass at the same time. This is the kind of classic metal that influenced the likes of Accept, with riffs and vocals alike coming at you quickfire.

Jawbreaker is a solid chunky number with an anthemic feel, and Rock Hard Ride Free has a slower (by Priest’s standards) yet intricate solo. The Sentinel sees Rob Halford’s vocal reach higher than highs and a catchy riff too.
Love Bites is a chunkier slightly slower number, but retains the heaviness. The note picking style is to the fore in Tipton’s solo.
Eat Me Alive is genuine classic and the slower pace doesn’t bely the blistering solo. There was, at the time, some controversy over the lyrically content, so it wasn’t played on the tour. It was, however, subsequently performed (Nostradamus) making it one of only a couple of Judas Priest albums from which every track has been performed live on stage. The track itself was picked upon by Tipper Gore and the PMRC, to which Priest responded with the track Parental Guidance a year or two later.
Some Heads Are Gonna Roll, a memorable track and a classic metal single, was written by Bob Halligan Jr.
Night Comes Down, Heavy Duty and the title track close the album in fine, if a chugging fashion. Proof that Judas Priest could chunk and grind as hard as heavy as they could riff scream and shred.

This album, like much Judas Priest, proves that in his prime Rob Halford could reach notes that dogs could hear, with power and cleanliness that most could only dream of several octaves lower.

The bonus two discs cover a full live show recorded on the Defenders of the Faith tour in the USA and is a fine performance, tight, blistering, rocking. With pretty much most of Defenders played live, they band were obviously confident in the then current material, and rightfully so. Breaking The Law was clearly already engrained in everyone there, as was the desire to sing along. Victim of Changes runs to over 9 minutes. Living After Midnight rocks the waves seriously, and the Screaming For Vengeance album gets good coverage. 21 Classic live tracks – can’t see them playing for that long now.

Overall, a great album; not Judas Priest’s finest studio moment but it’s not far off, and underrated as such.
As for the reissue – great to have the live show, a full live set and Rob Halford on form. Sounds fantastic too.
But here is the problem, on two counts.
Firstly, there’s the demo Turn On Your Light (released on the 2001 CD remaster)
Second, single b-sides (and this goes right across the Priest catalog), as on no album are the full bonuses, including non-album b-sides, included. I know there’s been the Singles Collection box but there even omissions there.
Basically, great album, underrated, and a great celebration with the live set, and some classic mid 80s metal, but again some missed opportunities.