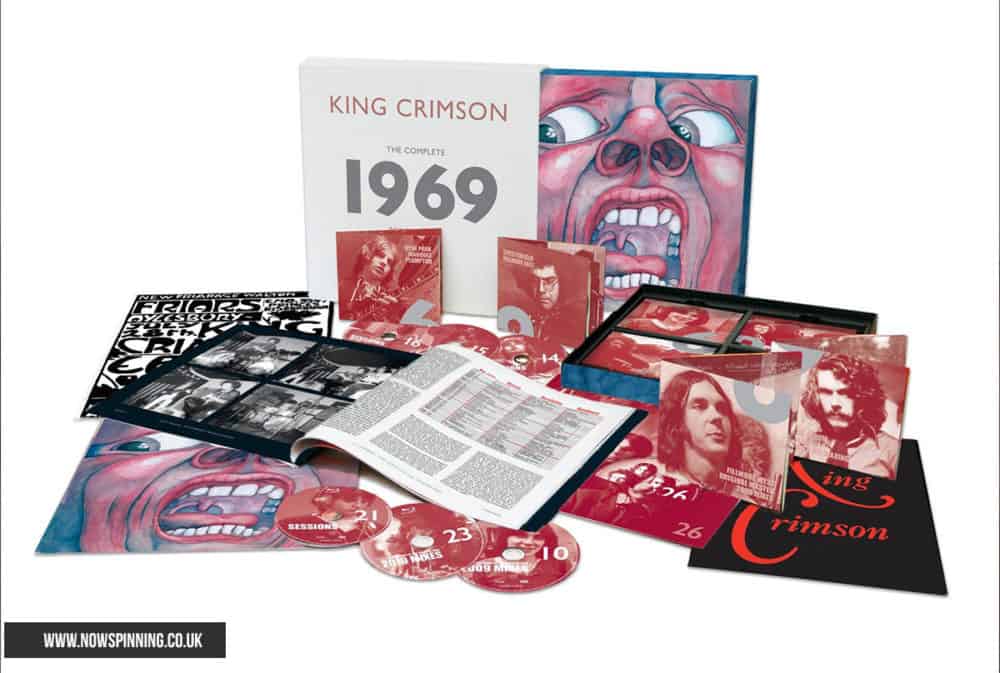 Could this be the ultimate box set ever assembled to feature one album?  The only thing missing from this set is a hologram of the band performing it in your room!

There have been many versions of this album released since the arrival of CD and the re-emergence of vinyl. Personally I have a vinyl copy and the 30th & 40th Anniversary Editions. (The 5.1 mix is stunning by the way!) There has also been a large box set but this one is on a whole new level.

So is this just another exercise in ripping off the fans to make them buy this material again?

Even without seeing it in the flesh and hearing anything from it, I would say absolutely not!. With Steven Wilson involved and Robert Fripp on board what you get here a completely immersive experience of a band coming together to create an album which has become almost mythical over the years. From the iconic artwork to the swirling mellotrons it sits at the heart what we now call PROG.

Although the focus of the box set is one album it goes far beyond that with multiple live concerts from the period. Each previous remaster / re-issue is revisited. The Blu Rays also have needle drops from the vinyl and there is even a copy of the DVD-Audio edition. This has been put together with the fans in mind first.

Notes From Steven Wilson
In what must surely be the last word in deluxe editions of classic albums, King Crimson’s debut In the Court of the Crimson King is now reissued as a 26 Disc (!) CD/DVD/DVD-A/Blu-Ray box set called The Complete 1969 Recordings, with literally every possible perspective on the album, including the complete studio sessions, alternate takes, BBC sessions, every known surviving live recording from the original line up, and pre-KC material recorded by Giles, Giles and Fripp.

The album itself appears in several versions, including a brand new remix of the album in Dolby Atmos for a completely fresh listening experience. I’ve definitely had a bit more fun with this mix, watch out for solos and mellotrons circling overhead! Released on 23rd October.

Release Notes From DGM Live
The complete audio history of one of the most important debut albums of all time is presented across 26 discs in this boxed set. Featuring a new Dolby Atmos mix by Steven Wilson, 6 CDs’ worth of session material on CD & Blu-Ray for the first time (fully mixed by David Singleton), a further disc of newly compiled studio material, the box also includes the original studio album, every alternate take known to exist, every mix known to exist, all live recordings known to exist & a selection of pre/Crimson 1968 recordings.

As with the previous seven boxed sets in the series, The Complete 1969 Recordings is housed in a vinyl sized box complete with a booklet featuring an introduction by Robert Fripp, notes about the source tapes from David Singleton, sleeve-notes by King Crimson biographer Sid Smith, previously unseen photos from the recordings sessions, additional memorabilia and a protective outer sleeve.

Having done 5.1 Surround Sound mixes for both the 40th & 50th-anniversary editions of the album, Steven Wilson was able to take full advantage of the opportunities offered by Atmos mixing, allowing for far greater movement within the mix itself. As he put it: “I’ve definitely had a bit more fun with the Atmos mix, watch out for solos and mellotrons circling overhead!” While the improv section of ‘Moonchild’ is a particular beneficiary of this approach, the mix is very active, with plenty of ear-catching moments to offer to listeners.

Likewise, significant work on the multi-track tapes was undertaken by David Singleton – who mixed all of the existing multi-track sessions recordings to stereo as well as running the single track CD length ‘Let’s Make a Hit Waxing’ – from those same tapes. “Listening to the original recording sessions was astonishing. Time collapses and you are suddenly there in the studio with a young band, just starting out, as they experiment with recording their first album. It is not so much listening to a slick product, more witnessing a process. You are present at the birth.”

Disc 2
Live at the Marquee

Disc 6
Live at the Fillmore East

Disc 7
Live at the Fillmore West