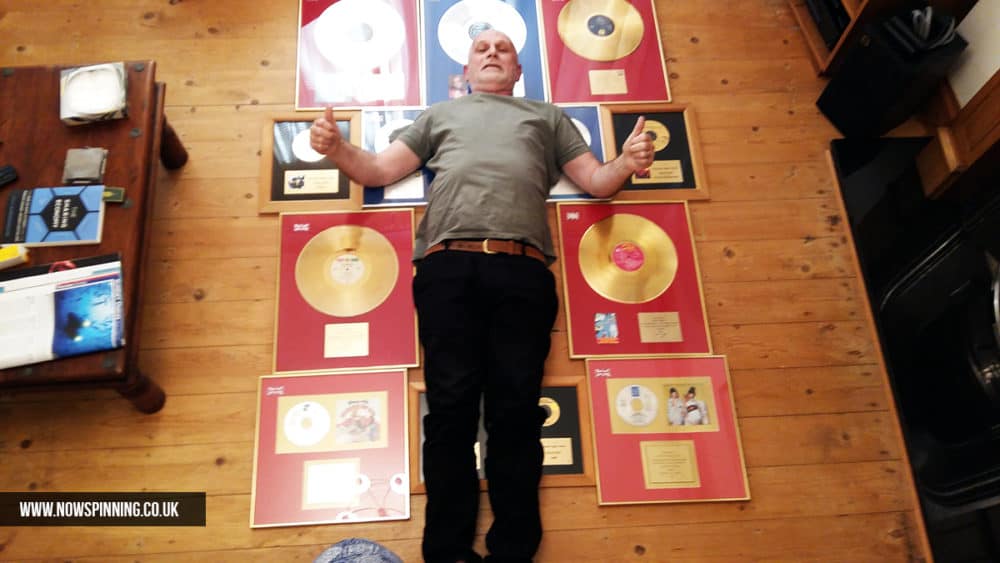 Richard Digby Smith was the staff engineer at Island Records and has worked with many bands that are both legendary and household names. I had published reviews of  Free, Back Street Crawler and Rough Diamond all albums that Digby worked on when he left a comment on the Now Spinning website to say how much he enjoyed it. I asked if I could ask him a few questions and this is the result!

Digby is still very busy in the music business and I have included a link to his autobiography (highly recommended) and career at the bottom of this page.

Phil : How did you get into the music business?

Digby : Like most boys of my age, in the mid ‘60s I was Beatles crazy, as well as Tamla, R+B, Soul…. had a tape recorder in my bedroom, learning to play guitar, wanting to be the next Paul McCartney!
Wrote to all the studios in London, got rejection letters, so went down to London, stayed at the YMCA for three nights and went along to ALL the studios, banging on a lot of doors, until my last day, with no success, I walked into Maximum Sound on the Old Kent Road and the guy there gave me contact details for Island Records, who were building a studio over in west London. I got a job there as tea-boy/van driver/general runabout, and soon began assisting on sessions as a “tape operator.”

Phil : You have worked with classic artists over the years, what does it feel like when you are asked to re-visit an album for re-issue?

Digby : It takes you right back to being there, as indeed it does every time you hear a track on the radio. I was re-mixing some Sandy Denny tracks with producer Joe Boyd, many years ago, and we came across various out-takes, some of which had incomplete vocal takes. Joe commented that it was a pity we couldn’t get Sandy to come along and re-do some of the vocals, which we couldn’t ‘cause she had sadly passed away a few years earlier.

Phil : Are there any specific albums that stand out where you wish you could revisit them?

Digby : I  would love to re-visit them all! Make them sound even better…..

Phil : Island Records in the early 70s looked liked it functioned as a big family. The cover of the compilation ‘You Can All Join In’ seems to illustrate this with so many bands altogether. Was there any rivalry between the bands at that time on how they were each doing commercially?

Digby : A healthy rivalry, but we all wanted everyone to do well, because of the knock-on benefit. Many of the artists would play on each others album, e.g. Kossoff on John Martyn sessions, Steve Winwood was always around, as was John “Rabbit” Bundrick to play Hammond on a track, Reebop (Traffic) would play congas for anyone, anytime!

Phil : In the early 1970s many of the bands were very young (as were the producers and engineers!) was it difficult to keep to a business ethic and control the various egos?

Digby : We were all very young, except for Chris Blackwell, the senior engineers Brian Humphries and Frank Owen, and some of the more senior heads of departments. But even they were only in their early thirties! I was in my late teens when I started at Island, as were Free, and most of the other artists were in their early twenties. Most of the guys and girls who worked in A+R, the art department, promotion, marketing etc., were all in their early twenties. The business ethic just came out of dedication, enthusiasm and a genuine love for the label. There was no room for egos, neither amongst the staff or with the artists. There was too much mutual respect.

Phil : I am a huge Free fan and Paul Kossoff is one of my favourite guitarists. We all know he had problems later on but what was he like to work with on the early Free albums? Did he work out his guitar parts in advance or were they done in the moment?

Digby : Rhythm parts, chord and song arrangements would be rehearsed and practised ahead of time, but a lot of the time the songs would be developed in the studio. Solos were always improvised, spontaneous takes. Kossy was easy to work with. Such a gentle, softly spoken guy with a great sense of humour and he was always very complimentary of my work.

Phil : You also worked on the Back Street Crawler album 2nd Street. How was Kossoff during the sessions, did he simply solo over the backing tracks or did he work on the songs individually? Even if he did just play over the top he was sensitive to the emotion of each song.

Digby : As best as I can recollect this record was recorded in the traditional way of laying down a backing track with everyone playing at the same time. Koss would have provided a basic rhythm track in terms of just the chordal compliment. Long after all of the overdubs, including keyboards, percussion and vocals had been added, it was just left with me and Koss, alone in the studio, to add the final guitar overdubs. Lead guitar stuff etc. It was the last day booked in the studio ( It was in L.A., but I was working in so many studios in L.A. at that time) It was painfully slow. He was in such a mess. I sat at the piano trying to show him, with even my limited skills at the keyboards, both of us with the headphones on, me shouting out when and where the chord changes were coming, what notes worked, which ones didn’t. It was agonising. We eventually got it all done, by which time it was very late in the night. So late, that it was morning. I arrived back at my apartment in L.A in the wee hours. I think it was a Friday morning. Slept all day. Rabbit called me the next day with the sad news. I feel saddened even as I type this…….

Phil : Staying with Kossoff, the Kossoff Kirke, Tetsu Rabbit album was really his project. What was it like working on that album. Was Kossoff a natural leader? Were you involved in deciding who should sing on what?

KKTR may well have been Kossoff’s brain-child, but it was very much a joint effort. Simon Kirke was very hands on as was Rabbit. Whoever wrote the song would be the one to sing it. Potential for a lot of egos to clash, but that never happened. For Paul Koss and Simon Kirke it was a welcome break from the pressures of being in Free. It was a fun album to make and I think that comes across when you listen to it.

Phil : One of the amazing things about the Songs of the Yesterday box set is that so many songs on there are alternative versions.  Was this usual practice or were FREE unique in this ?

Digby : Usual practice when trawling through the archives, to search for alternative lead vocals, guitar solos, etc. Did the same thing a few years ago with some Bad Company tracks from their first three albums, for Warners (I think!!) courtesy of Hugh Gilmore.

Phil : You worked on the Rough Diamond album which looked like a potential supergroup at the time. David Byron was out of Uriah Heep and no doubt wanting to prove himself. On paper and record, they sounded like they could have been bigger than they were. What was David Byron like to work with and do you think it was the arrival of Punk and Island records moving away from mainstream rock that caused them to split up?

Digby : David was a charming man and very easy for me to work with. No idea why the band split up, but I agree, the potential was there for something big. Looking back, I think there may well have been underlying mental-health issues with David, as indeed with Paul Kossoff that, at the time, were unrecognised and ultimately contributed to their untimely deaths. In today’s climate, these issues are more openly discussed, and both David and Paul would have benefitted from that. Just a thought.

Phil : What do you think of modern production techniques compared to those of the late 60s and 70s?

Digby : You have a lot more at your fingertips these days than ever before. The fact is, that back in the ‘60s and ‘70s you wouldn’t even be in a recording studio if you couldn’t play your instrument, or have a unique voice. Since the advent of truly advanced multi-tracking, performances that appear on a recording are more easily manufactured in a piecemeal fashion. You are no longer capturing a real-time event. It is as much about aural effects these days as well as performance, whereas back in the day, you were taking audio snapshots of the creative moment.

Phil : Do you have any preference to analogue or digital?

Digby : Digital! I love the controllability, the re-call, the absence of tape hiss and signal to noise ratios. I always tell people that those great records from back in the day were great despite, not because of the fact that they were recorded analogue.

Phil : Of all the bands and artists you have worked with who was the easiest to work with and who was the most challenging?.

Digby : I have always found people easy to work with. You just have to show them you care as much about the outcome as they do. And all of the artists have been challenging in one way or another. That’s what makes it special.

Phil : Do you have any “Tape Op” funny stories? And or innovative ways to create effects?

Digby : Too many to mention…it’s all in the book!

Phil : What projects are you currently working on?

Digby : Working on an EP with Gavin Sutherland of the Sutherland Brothers, just mixed a live album from some ‘70s recordings of a famous band from Birmingham (not at liberty to divulge further details) and various artists down here in the south-west of England, ranging from Country Rock (Sarah Yeo), Electro Psychedelic (The Molecules), a young rapper called Jacob Early and a Reggae/Rock band called Lionstar. Busier than ever. I feel like I’m just warming up!

Phil : Finally, what are your thoughts on the physical music market, do you think CDs and vinyl will always have an audience?

Digby : Music doesn’t fill the same social space that it once did. For the greater part of the second half of the twentieth century, music became the back-drop of people’s lives. Your world revolved around your favourite artists next album, the clothes they wore, the things they said, both inside and outside of the music. Music was at the centre of my universe, but for people today, other events occupy that space. Many of my clients that I work with today don’t even have a CD player, let alone a turntable!

Phil : Thank you very much for your time. Where can people get hold of your Book. ‘One Two, Three, Four: The life and times of a recording studio engineer’?

Digby : My book is available from The Book Guild, as well as the other usual places like Amazon, Waterstones