This unboxing video looks at the early 1980s Heavy Metal band BODINE. The band were from the Netherlands and you may be more aware of guitarist Arjen Lagarde who went on to form Ayreon later on. This is a great little box set that comes with a 40-page booklet, 4CDs and a poster. They may not be a household name in Rock circles but this had been put together with a lot of passion and respect for the band and era. Highly recommended.

Prior to this wonderful little box set appearing, all I knew about Bodine was their third and final album called ‘Three Times Running‘. I had originally bought this on vinyl in a sale from HMV back in the early 1980s. I may have played it once or twice but then filed it away until a few weeks ago when I featured it on the Now Spinning Facebook Group after realising this was, in many ways, a lost classic from the glory days of Heavy Metal.  A bit more research and I was pleasantly surprised to find out that a box set featuring all of Bodine’s albums had been released in 2019 by Pseudonym Records.

Considering that Bodine did not sell a huge amount of records, or even play that many gigs, this box set has been put together with a lot of love for the subject and the fans. The whole presentation is excellent.

You get a sturdy clamshell box that contains the three official albums and a fourth disc of rarities. Also included is a poster and a 40-page booklet! The booklet here puts similar box sets by Ratt and White Lion (for example) to shame. You will be able to see from the video that this a substantial booklet and a quality presentation.

The first album simply called ‘Bodine’ was released in March 1981 and reminds me of Whitesnake, UFO and Bad Company in places. This features Jay Van Feggelen on vocals whose blues rock voice really suited the material. Unfortunately, there was a clash of interests in where the bands sound should be heading and Jay left to be replaced by Axel Langemeijer on vocals. The band also added Arjen Lucassen on guitar as they headed for a more contemporary metal sound.

The result was ‘Bold As Brass’ which was released in 1982. On this album, the band obviously had sights on the same market as Accept and Judas Priest.  The song titles reflect this, with the opener Rock Machine and Heavy Metal Heart, Heavy Rain and Regular Rocker.

For the final album ‘Three Times Running’ (1983) the line changed again when bass player Armand Van Der Hoff left. He was replaced by Jeroen Bos although by the time he joined the album was finished. This album to me was their finest hour. The desire to move more towards a heavier sound is more natural on this album. There are some classic tracks to explore here, Shout, Rampage, Hard Times are some great examples.

Also included is a fourth CD called Bodinism, which features demos and outtakes, and even a nine-minute interview with the band at the end.

The booklet is put together like a fanzine, all the band are involved, there are photos of every lineup, posters, singles, memorabilia and all the info you could possibly need.

In the UK Bodine are a band that seldom gets mentioned in the story of Heavy Metal, however, in Dutch circles, they are rightly seen as a band that stood on the edge of greatness. 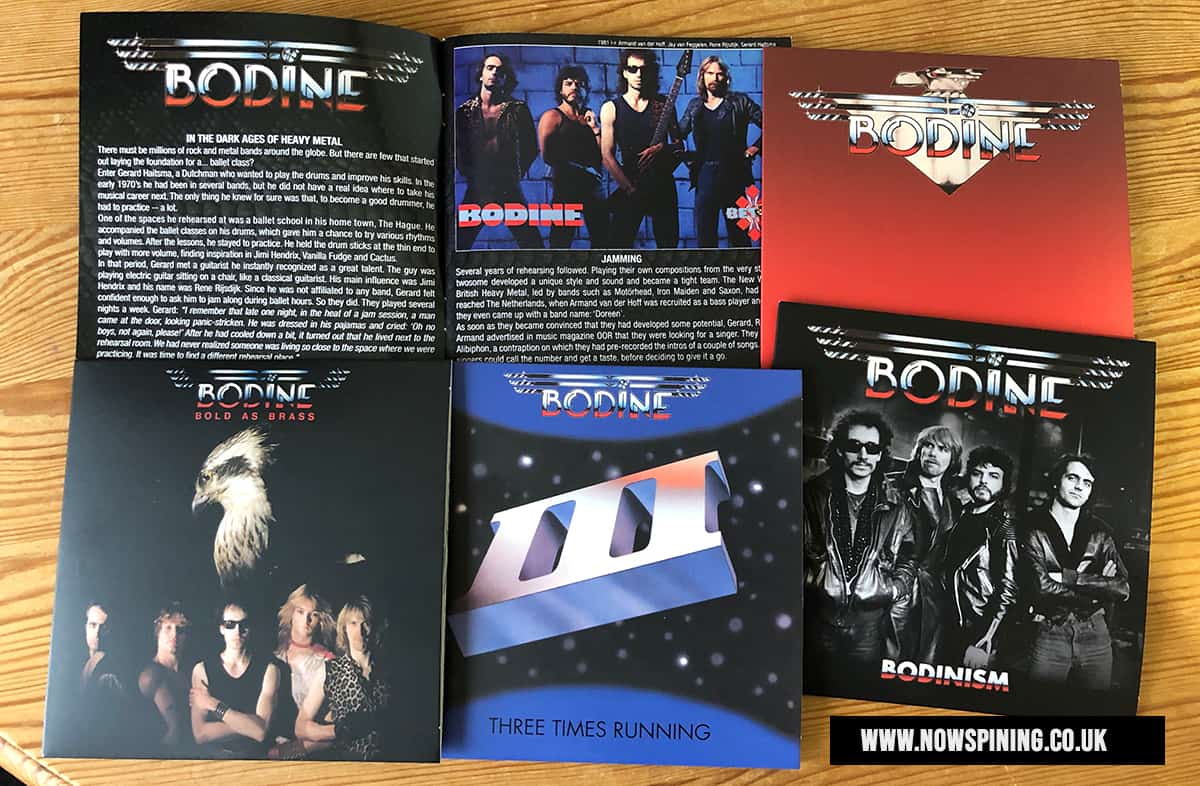 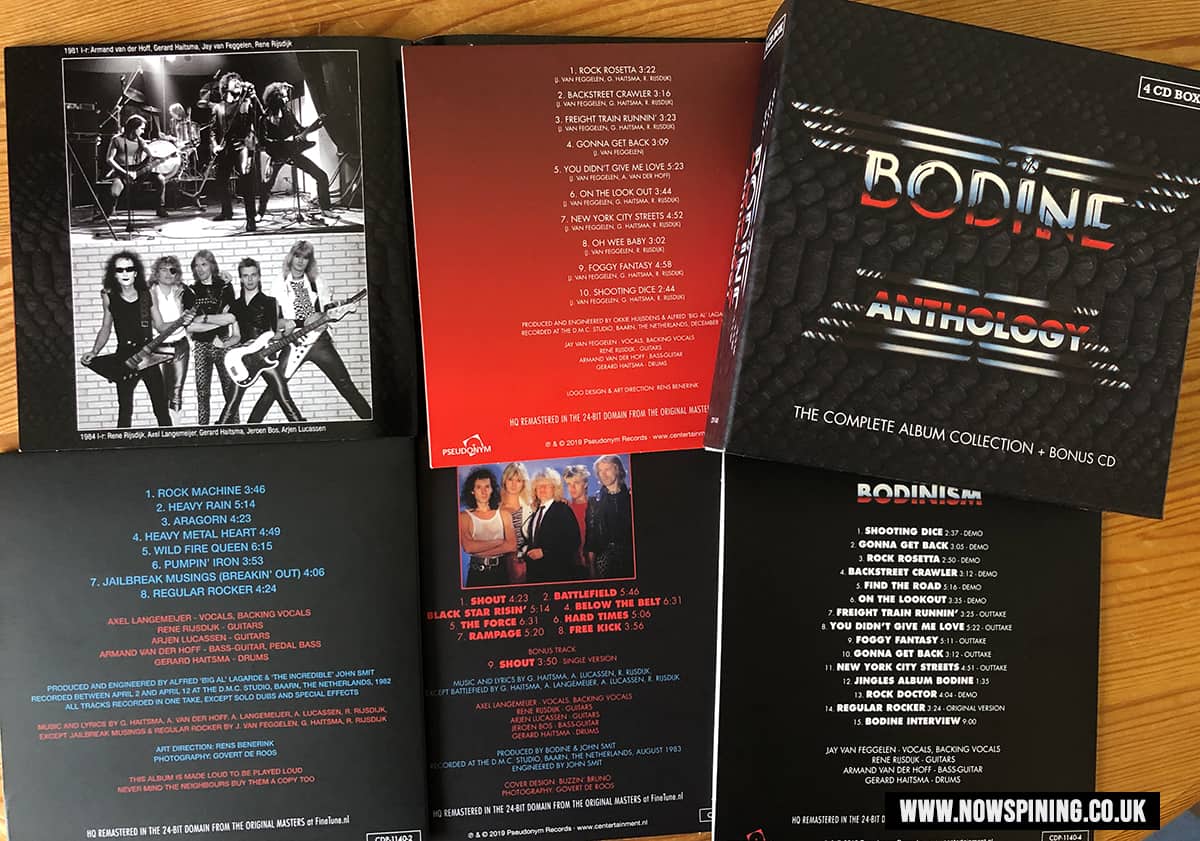 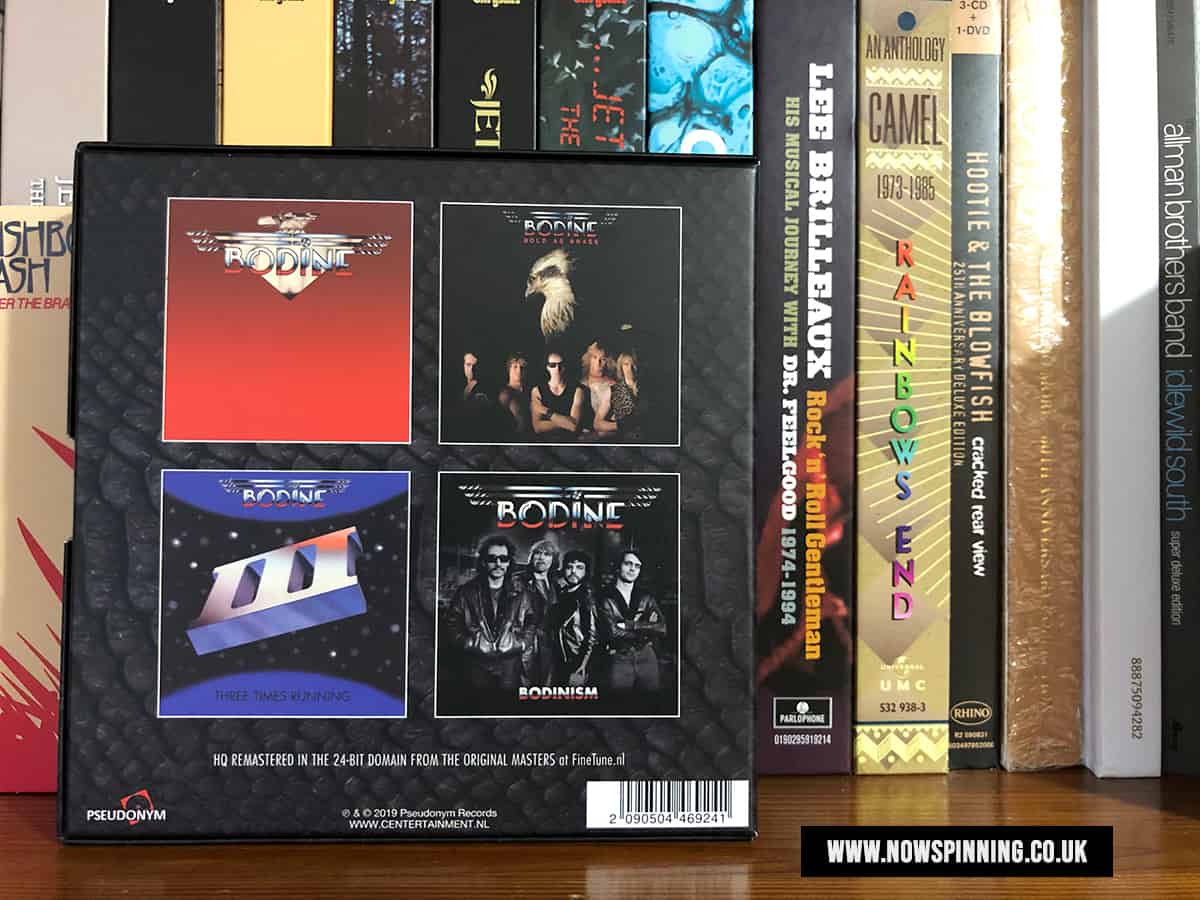