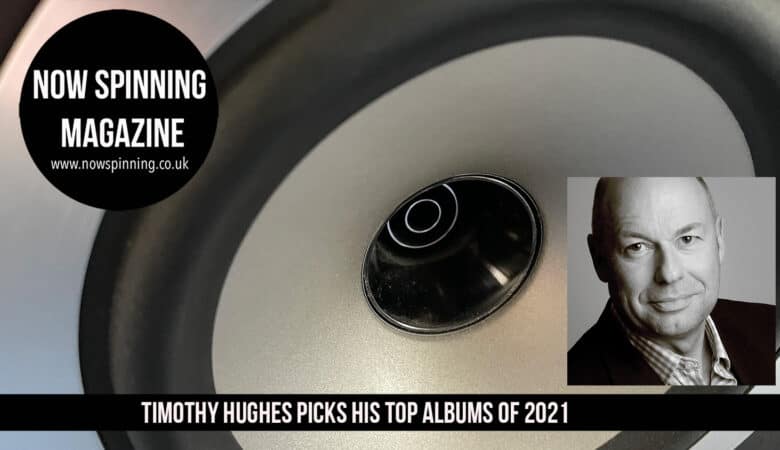 Back in 2020, Steven Karlsson of the Facebook group Now Spinning Magazine completed a list of his top 10 Prog records of 2020. (click here to read it) More recently Phil Aston has also created a video review of his Top 30 Albums from last year

I got so much from Steven’s PROG article in terms of my own musical journey, it has inspired me, in 2022 to write my own list, looking back on the 2021 year. There are lots of lists at this time of the year, why have I complied mine?

Put simply, if I can inspire one person to investigate some of the amazing music that is being released today, then the time spent writing this, has been well worth it.

When you start complying these sorts of lists, you start off with good intensions to keep it short, a top 10, then it becomes a top 20, etc. What I decided to do is come up with my list of music that was released and a list of music that was re-released as I see them as quite different. If we take Motorhead and their live epic “No sleep to Hammersmith” this is the 4th time it has been released, it shouldn’t stand on the same list as maybe, Frost* and “Day and Age”.

I decided to pull the jazz albums out to stand alone as I think the music genre needs special emphasis and promotion. It’s a niche and needs to be promoted in its own right. I’m sorry, the list isn’t very long but jazz hasn’t been my focus this year. My bad I know.

My jazz top 4 new releases are

There now follows some quick reviews of my top 25 new releases of 2021. They are quick, there are people far better than I am at writing reviews, after all there are people that do it as a living. You all have access to the internet and I’m sure you will do your own research before any purchase.

Soen – Imperial — I’m obviously on all the wrong email lists I was emailed about the new Soen record on the day of release. Had no idea who they were so looked them up, Swedish prog supergroup with x Opeth drummer etc. Watched some videos on YouTube. Liked what I heard. Come on here and Steven Karlsson of the Facebook group Now Spinning Magazine is talking about picking his copy up the next day.

Its time Iron Maiden were exposed for who they are, a bunch of history teachers. Their objective is to teach boys and girls who wear black t-shirts history. Behind the scenes it’s all corduroy and patches on the elbows. These long-haired men are just a front.
My tongue is, of course, placed firmly in my cheek.
Senjutsu (Japanese: 戦術, loosely translated as “tactics and strategy”) is the 17th album by Iron Maiden, released in September 2021. It sounds just like a Maiden album.

French Prog rockers with this year’s live album “alive”. There is a great cover of Björk’s “army of me”.

Michal Lapaj – Are you there?

It would seem I’ve fallen down a rabbit hole, back in 2019 I didn’t even know who a Polish band called Riverside was and here I am buying their members solo records. I blame my “growth mindset” or am I just one of those weird physical music collector types? — If you don’t know Michał is the long-time keyboardist for Polish band, Riverside. On “Are You There” he brings in Mick Moss of Antimatter, Bela Komoszyńska of Sorry Boys on vocals and Artur Szolc on drums. Seven of the ten tracks are instrumental. Pity he is using Mystic Productions to handle the release otherwise this record would be bigger than it is.

Frost* back in 2021, with their fourth album

In Madeira, on holiday, a couple of people posted about Public Service Broadcasting on the Facebook group, Now Spinning magazine. Thank you for this! Sitting, as I was in the sun, I thought I would investigate listening to a PSB playlist on Spotify. Checking out the PSB website I spotted they had a new one coming out. “Bright magic” is written in Berlin about Berlin and is an outstanding piece of work, in a PSB style of course.

Not exactly sure when Tesseract walked into my life, but blown away with this. Released in 2021, and officially a live album, “portals” clocks in at over ninety minutes. Respect to the drummer who only has 6 weeks to prepare for this. Reading up on the band I find that they are credited as one of the bands to pioneer the djent movement in progressive metal. You learn something every day.

Pineapple Thief – Versions of the truth

Following up the 2020 album,” Versions of the Truth”, Pineapple Thief had expected a tour to back up the album. With the pandemic hitting, touring was placed on hold. A performance was therefore recorded and committed to CD and DVD.

I was blown away with this album and went out and purchased the back catalogue.

The first two albums blew away all the competition and often appeared on people’s best rock album of those years. “Typhoons” is the 3rd album by Royal Blood, released on 30 April 2021.

Motorpsycho and Kingdom Oblivion, more from the Norwegian rock band from Trondheim.

One of the things that amazes me, even today, is the lengths fans will go. I attended a lecture (before covid) where there was a discussion about why people have lyrics tattooed on their bodies. I have no tattoos, but it’s “interesting” to me why people do. The other thing that fascinates me is the communities people form and instant friendships people make over a band for example. To get this CD I needed to join the Riverside fan club. I now have access to the fans FB page, a window into a world of fandom. Anyway, arrived today – Riverside – Wasteland tour – 2018 – 2020 – Only available through the fan club.

While sitting on a Sun lounger in Madeira on holiday, there was a discussion about Katatona so I spent the day listening to them on Spotify. My mind drifted and decided to look them up on the internet and spotted they had this “new one” coming out. It’s an album of B-sides and rarities. The album is called “Mnemosynean” which is Swedish for Mnemosynean.

When my first book was published, everybody kept asking me when I was going to write part 2. Creatively, I wanted to do something else. Something around the subject, less popular and I knew would sell less. — Until my first book I never saw myself as a creative, but now I do. What has this got to do with Steven Wilson? While I am new to his music, I can see a person, who wants to go where is creativity, takes him. If you are looking for “In Absentia 2” this, isn’t it? Probably the most commercial thing I have heard from Steven. But I would qualify I am not a SW expert.

Fan club release of a concert at the Apollo in Brooklyn, New York. 2 CDs, with the hits, acoustic set and a duet with a local soul band. Bono, The Edge and the team at their best.

“Raise the Roof” is the 2nd collaborative album between Robert Plant and Alison Krauss, released this year. It’s very similar in sound and structure in terms of Americana, folk, country, to the 2007 album, from Plant and Krauss, “Raising Sand”.

Debut album by Adrian Smith and Ritchie Kotzen – What you would expect from these two guitarists / vocalists, a guitar based rock album – it does what it says on the tin!

Resident Music and Rough Trade’s number one album of 2021. Different lists but same record. – Dry Cleaning and “New Long Leg”. Who said that new music in 2021 was rubbish?

KK Priest – Sermons of the sinner

What a better way to put two fingers up at your previous employer than this.

KK Downing, (aged 70) previously of Judas Priest, comes back with a cracker, he ticks all the metal boxes for music and cliques.

The Pineapple Thief – The Soord sessions Vol 1 to 4

While this is actually Bruce Soord, I’m sure the record company wanted to put it out as The Pineapple Thief. During lock down, Bruce streamed a number of solo shows and these are the 4 recordings and bits from the 5th. He messed up on the 5th and as only released the bits where he didn’t go wrong. A great set of acoustic Bruce Soord solo songs as well as acoustic Pineapple Thief songs. One of the comments from the audience is “more songs and less chat” I totally agreed with that.

Wow, what a talent! …. An album that Prince shelved being released posthumously, it’s going to be crap, right? I mean he shelved it because it was rubbish and this would be a cynical cash-in by the Prince estate? Not so, many a musician would give their right arm to right music like this. It’s up beat, funky and very Prince.

Guitar and drums duo, John, with their third outing, “Nocturnal Manoeuvres”, prove, that punk / indie isn’t dead. To quote the band from a recent interview “there are some more melodic moments in among the noise.”

Must be one of the best jazz albums of 2021? The record is number 6 in the Resident records, albums of 2021 and number 17 in the Rough Trade records of 2021. The blurb says “Simply stunning 46-minute album. It floats and melts and is beautiful and mesmerizing. Floating Points, Pharoah Sanders and the London Symphony Orchestra joining together for an album for the ears, heart and soul.”