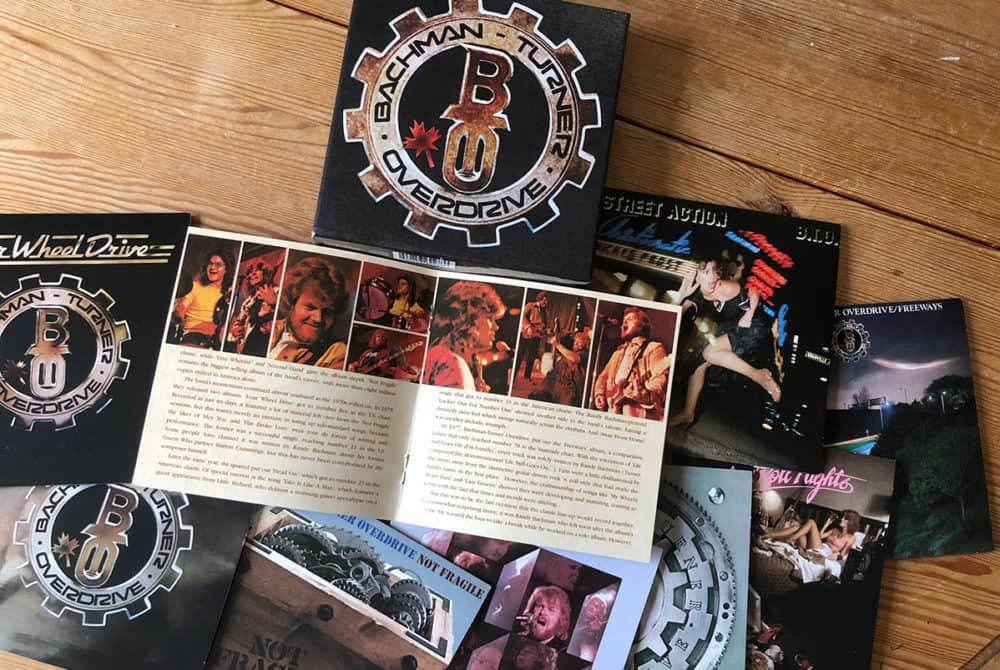 Canadian rock band Bachman Turner Overdrive, also known as BTO, are synonymous with classic 70s
rock and the hits Ain’t Seen Nothing Yet and Taking Care Of Business. Formed in 1972 by Randy
Bachman and Fred Turner, from the ashes of country / soft rock band Brave Belt. During the 70s they
released 8 albums to much acclaim and radio airplay (the last two as BTO, without Randy Bachman),
and the band have reformed and existed in various forms since, sometimes with other family
members and without Bachman and/or Turner.

Those two aforementioned hits (two of many) are important culturally; Homer Simpson is a well
documented fan, and who (at least in the UK) can forget Smashie & Nicey’s association.
This set is those 8 original albums, each in a card replica sleeve, with a booklet annotated by
Malcolm Dome.

Formed in Winnipeg, Manitoba, Canada, guitarist / vocalist Bachman had originally played in The
Guess Who in the sixties, before leaving to form Brave Belt, with Guess Who vocalist / keyboard
player Chad Allan and drummer Robbie Bachman (Randy’s brother). For their second album they
were joined by bassist / vocalist Fred (C.F.) Turner, on Neil Young’s advice. The second album also
did not sell well and the band were dropped by their label.

Taking a rockier approach, the demos for 3 rd album (Black Belt III) were picked up by Mercury and
they changed their name to Bachman Turner Overdrive. Surnames were in, and Overdrive was
agreed upon as it suited the music.

The 1973 eponymous debut, released May that year, proved successful, with Turner rough vocals
leading the lion’s share of the songs. Alongside Randy and Fred were Tim Bachman (rhythm, guitar)
and drummer Robbie Bachman. Solid anthemic driving rock music, there were no hits (yet), with
Blue Collar reaching the lower end of the of the charts. Opener Give Me Your Money features a
catchy riff and a decent guitar solo. There’s a hint of heavy country to Hold Back The Water, giving a
Southern feel, and the aforementioned Blue Collar is a gentler but commercial rock track.

Some pace changes and heavier tracks make for a solid debut that would go Gold the following year.
With Norman Durkee bolstering the line-up on piano, the second album followed the same year and
was a more consistent and successful set. Blown was a chunky opener, while Welcome Home a more
acoustic and smooth build to some rough and solid segments. Let It Ride showed the more
commercial side and was a hit single. Highlight though, is the closing track Taking Care Of Business; a
radio and live staple with catchy riff and rhythm. Love it.

1974’s Not Fragile (a tongue in cheek nod to the Yes Fragile album title) saw Blair Thornton come in
on guitar, providing a more duel lead style. Their only #1 album in the main US charts, it featured the
hits Roll On Down The Highway (an uptempo and uplifting track and Ain’t Seen Nothing Yet, which
you all know (or at least should do). The new guitar interplay style remains heavy yet more
commercial.

1975’s Four Wheel Drive followed a similar line, and was recorded quickly in under a week. This was
largely due to the use of the previous album’s leftovers, pressures from the label for a quick follow
up that would later cause tensions in the band. The track Hey You is well worth spinning a few times,
it definitely stands out and was a hit in the US and Canada.

Released at the end of ’75, fifth album Head On was a solid, if a little weaker, while there is some
good guitar work here. The songs are typical BTO but do drift at times. A stand out rocker (and well
worth checking out) is Take It Like A Man, featuring some stonking piano from Little Richard.

A compilation and Japanese/Canadian only live album later, and Freeways followed in 1977. While it
features some good work, the Allmanesque solo from Thornton a highlight, it is widely considered a
weak album, as the band felt rushed and forced to put new material out quickly. Turner felt a
sideman and Bachman admitting it was rushed. That said, My Wheels Won’t Turn is one of a couple
of tracks as good as anything BTO would ever do.

Following Randy’s departure the band continued, with April Wine bassist Jim Clench coming in and
Turner moving to guitar. As opener I’m in Love shows, the sound is a little heavier and upbeat. The
crisper sound helps make for a good and enjoyable album, but it’s not classic BTO. Far from it.
Much the same can be said of 1979’s Rock’n’Roll Nights, a decent and polished album with some
good tracks (Rock’n’Roll Hell would be covered in altered form by Kiss in 1982). Several tracks were
written or co-written by producer Jim Vallance

A wonderful set that encompasses all the albums of the classic period, the good, bad and ugly. No
extras (non-album single As and Bs, the Japan Tour live album), but if you want the straight albums
this is as good as it gets, and well packaged too.
From the mid 80s onwards the band existed (toured and recorded) in various guises, including the
classic Not Fragile line-up, but this is the era everyone knows and expects.
4/5
Joe Geesin 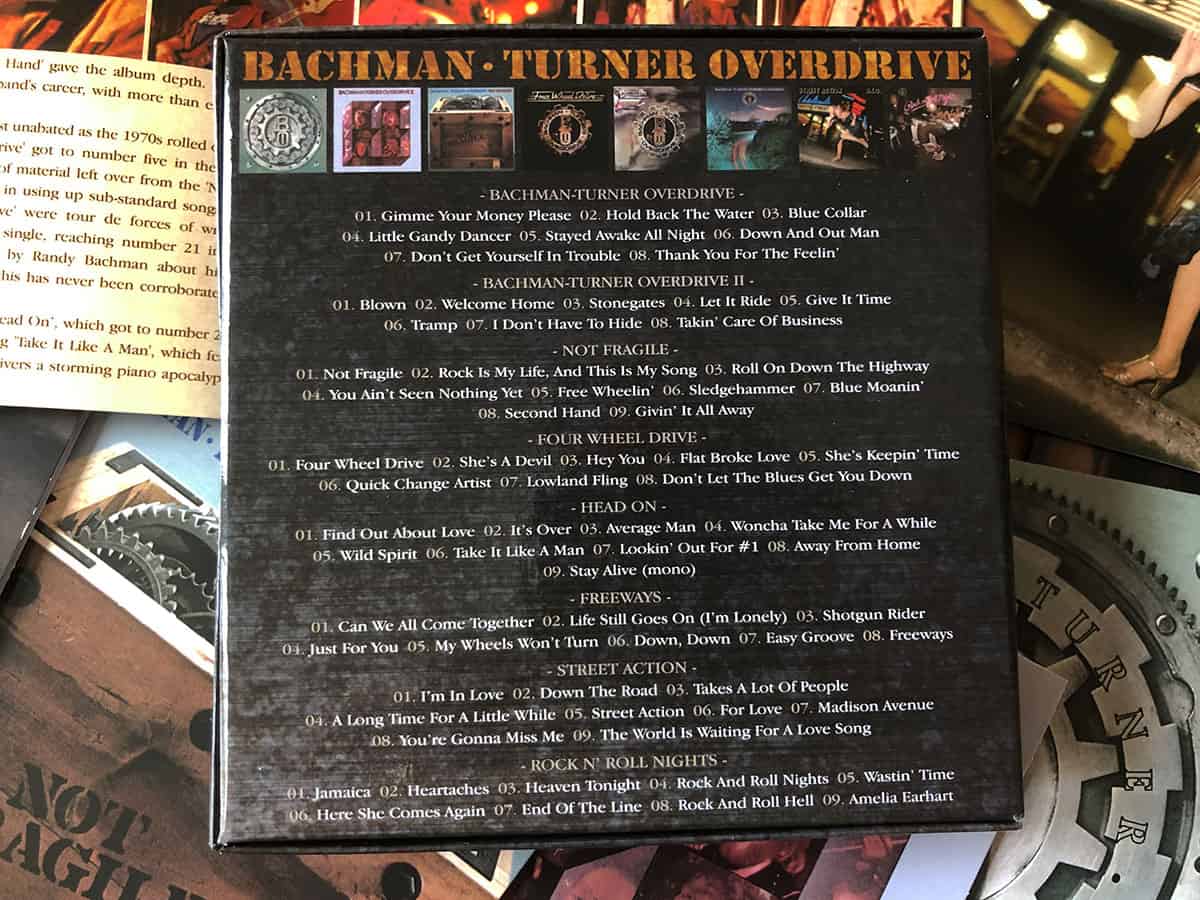