I have been playing this album a lot recently. It is anything but subtle or ideal for a quiet night in but I love it!

The album is ‘Hidden History of The Human Race by Blood Incantation, for many people the category for this album would be Death Metal. This is a term that conjures up growling vocals and for some rock fans will see them heading away thinking it will not be for them.

Over the years I have grown to love this more extreme form of rock music, however, there is a lot more going on here than just heavy metal.

In the early 1990s when Progressive Metal was finding its feet with bands like Dream Theater another more intense form of metal was also running alongside it with bands like Death, Cynic and Morbid Angel etc. Now known as Death Metal this was the style where the ‘shouty – cookie monster vocals came into their own.

I’ll admit that for many years I avoided this and just decide it was not for me until I heard Damnation by Opeth. This really opened my eyes and led me to listen to more albums by Opeth who have since become one of my favourite Prog Metal bands.

Opeth used growling and pure vocals as almost different characters in the songs and unlike the early Death Metal bands, the sound from the more intense vocal style sounded more like an additional layer of instrumentation to me.

Another band that has a similar approach is Swallow the Sun, again the vocals are like extra layers of music adding to the atmosphere and emotions of the music.

This brings me to Blood Incantation, this to me is a mixture of Miles Davis, Dream Theatre, Opeth, Pink Floyd, Black Sabbath, Death and Billy Cobham!  It is absolutely intense and the percussion from drummer Isaac Faulk is just outstanding

There are elements amongst the intense riffage where it is like free form jazz. I have been playing an album by Pharoah Sanders called ‘The Creator Has a Master Plan’ and there are moments that mimic this in its intensity.

I am sure that my video is the only one on the planet where these two albums appear together in the same frame!

This is seen by many people as an absolute classic modern jazz fusion album, but there is a point in the title track where it’s just a cacophony of sound and just full-on intense instrumentation. Blood Incantation are similar.

Think about Miles Davis and Witch’s Brew how that sounds to many people (even today).  I am not suggesting that we compare Miles Davis to Blood Incantation but to approach this band with an open mind, this is complex, intelligent, music, that demands a listen.

The centrepiece of the album is Side Two of the vinyl album which features just one track which is called Awakening. The first part of this epic 20mins track is called From The Dream of Existence, as this moves from a full-on aural assault on the senses and opens up into ‘…To The Multidimentensional Nature of Our Reality. This second section is something akin to ‘On The Run by Pink Floyd from Dark Side of the Moon. It uses the same kind of synth sounds. Before anyone thinks I am saying it’s like Floyd is not like Floyd, but in this part, they pay homage to that 1970s keyboard sound. For the third and final part, we are back to the almost mathematical engineering approach of guitar playing.  It sounds like everyone’s pushing in different directions but it then moves into a more traditional and melodic guitar solo, which is absolutely beautiful.

There is an instrumental called ‘The Giza Power Plant’ which has no vocals apart from the last section. This is another example where the intense vocal growl is used as an extra layer of instrumentation.

The album is very much a concept album based on ancient Egyptology and all the myths of the pyramids and aliens! So if you are of a certain age and grew up with Chariots of the Gods you will be familiar with the subject matter.

I went for the Vinyl Package because it also comes with a CD. The sticker on the front of the album describes it as mind-bending and intense cosmic death metal, for people that love Morbid Angel etc. I would say that it’s for anyone who loves music that pushes the boundaries in every single direction!

The cover art is by Bruce Pennington who is well known for his Sci-Fi paintings from the early 1970s, the cover reminds me of something that might have appeared in the old Eagle Comic.

On the left-hand side of the gatefold sleeve is a large fold-out poster of the front cover. Also included are a lyric sheet and a separate booklet that covers the mythology behind the concept of the album. it is also really interesting seeing all the things that have influenced the band everything from Tangerine Dream, Pink Floyd to even Enya!

I’ve been playing this non-stop and while it might be the album you put on at a dinner party (maybe it is!) to me, it is a very exciting and uplifting album.

Rock music is in safe hands! 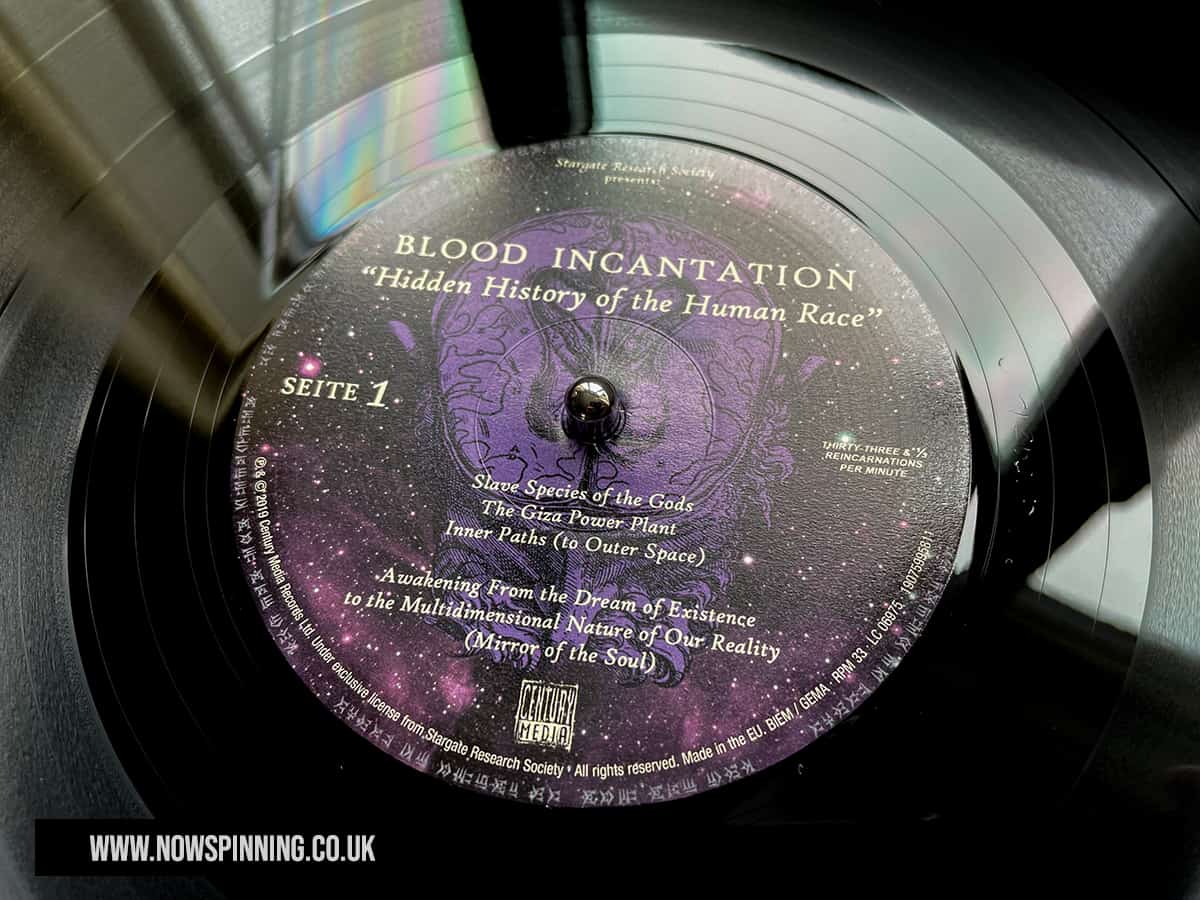