In this video, I’m going to look at the Deep Purple album ‘Come Taste The Band’. This is in the top three of my favourite deep purple albums. I would probably put ‘Made In Japan’ first then ‘Burn’ second. And this one third, and you can see from the T-Shirt I am wearing in the video, I am a bit of a fan!

It didn’t start that way,  in fact, I didn’t buy it when it was first released. I was such a massive Ritchie Blackmore fan and he was Purple to me.

I had seen them on the Burn Tour and he had this kind of mysterious aura about him and his guitar playing around 1974 to 1976 was just absolutely phenomenal. So when I heard that Blackmore was leaving Deep Purple, I just thought it was over for them. If you watch my video looking at the first Ritchie Blackmore’s Rainbow album you will know what I mean.

Rainbow’s first album was released in July 1975 and Come Taste The Band came out in November that year. It was also the same time that Tommy Bolin released his solo album Teaser -. I ignored both of these albums at first even though now they are desert island discs!

I remember coming home on the bus one from work. It was getting towards Christmas 1975 and in the newspaper, I was reading mentioned a list of records that might be suitable gifts for your teenage son or daughter.  Under the rock section, it showed, Come Taste The Band by Deep Purple saying if you’ve got a son at home who has long hair, rock t-shirts etc, then maybe this is the album for him!

It made me wonder if I was being harsh, the reviews had been mixed, but the band was on a path of change, Stormbringer had been different but I had liked that. When I saw the album in the record shops it was a luxurious affair, by that, I mean, recent Deep Purple albums had been issued in single sleeves with no lyric sheets. With Come Taste The Band it was back to a gatefold sleeve, with a nice glossy cover, all the pictures in the gatefold were of a band at the height of their success. They all looked fantastic and really cool. It was a well put together album cover, it looked very, very classy. The wine glass on the front and on the back with the lipstick etc and it came with the lyrics. So I went for it, I bought it home and my expectations were pretty low. I put it on the turntable, turned up the amp and boom…

One observation (this is for Ear Music) If there is ever another deep purple compilation it should be called ‘Side One, Track One’  because every Deep Purple album on track one side one has been absolutely killer.

Come Taste The Band was no different. Opening track ‘Coming Home’ starts with a crash ending, a bit like the way they started Burn on the live albums from the period. A hit on the snare drum, then an explosion of sound and Tommy Bolin’s Echoplex is triggered and they’re off. This is a great opening track. There are some fine lyrics from David Coverdale but primarily it is a vehicle for Tommy Bolin. The guitar solo is just epic.

Those of you who are Tommy Bolin fans (You’ll know what I mean when I say this), but he has these kinds of music motifs/guitar licks which he uses a lot of his guitar solos which are very recognisable. There are some in this track. Once you’ve heard them, you will notice them in tracks and bands he has played with.

Glenn Hughes does not play on ‘Coming Home’ because he was a bit worse for wear so Tommy Bolin played bass instead.

The next song is ‘Lady Luck’ which has a Bad Company feel to it. I do think David Coverdale’s performance on this album is just stunning. His voice had matured, it was rich, rugged powerful but with a restrained control. The richness in his voice is just beautiful. It is quite a short track but the dynamics are excellent.

Next up is another highlight of the album ‘Gettin Tighter’  This opens with a superb guitar riff from Tommy Bolin, it is a really funky, but still rock-based. This song a vehicle for Glenn Hughes, fabulous verse and really tight chorus. The other thing I want to mention on this album is how amazing Ian Paice’s drumming is. During this period including the work he did with Paice Ashton & Lord is just stunning, the guy is on fire. Perhaps it was the different styles coming together, the funky off beats, but the way he locks in with the bass playing from Glenn Hughes is just so exciting to listen to.

The next track is ‘Dealer’ which also features a verse sung by Tommy Bolin. Bolin was a wonderful vocalist, his voice was gentle and also very expressive. It is a shame they did not stay together long enough to explore the possibilities of a three-way vocal harmony from Coverdale, Hughes and Bolin.  The song also features a great solo from Bolin before we move onto ‘I Need Love’.

‘I Need Love’ the funkiest song I think they ever did, but, David Coverdale’s really carries this. It is a really uplifting song.  The interplay between Glenn Hughes and David Coverdale is very different on this album than ‘Burn’ or ‘Stormbringer’. Also, the production from Martin Birch has to be mentioned for making the album work so well. There is more space between the players, Coverdale’s voice is just immaculate. The song ends with some magical guitar runs from Tommy Bolin. The Kevin Shirley Remix from 2010 is even better as the fade-out is extended.

Now we come to my second favourite track on the album, which is ‘Drifter’ which opens side two. This is a Hardrock tour de force. An emotional vocal delivery by David Coverdale with a subject he will visit many times during his career. The song has everything, hard rock, fast riffs and this part in the middle where everything slows down and floats on this real smooth groove, it then starts to build between the bass and drums and Bolin’s slide guitar. Then it gallops towards the end. Terrific stuff!

Next up is ‘Love Child’ which is the first song to have any real input from Jon Lord with his synthesizer solo. The riff is borrowed from a James Gang track from the Bang album. It’s a great track with David Coverdale getting all hot and bothered watching his woman dance the seven veils!

Jon Lord is very much in the background on this album, I don’t know whether it was to give space for Tommy Bolin to establish himself. This does make sense as Bolin did write 90% of the music on the album.

Next up is Jon Lord’s main solo spot the haunting and most splendid ‘This Time Around / Owed To G’. The first part is a ballad that floats on banks of Lord’s keyboards allowing Glenn Hughes to take his vocals towards the heavens. This then blends into an instrumental that is almost jazz-rock fusion. The funk dial is on 11 but the tracks again gives Tommy Bolin a real chance to shine.

The album closes with ‘You Keep on Moving’ This was also a single, which did nothing because it was so far removed from the Deep Purple people thought they knew. But as time has gone by it has become seen as the Deep Purple MK 4 track. If there are any compilations that have MK4 tracks on them, it is nearly always ‘You Keep On Moving’ that gets picked.

It was written during the MK3 period, but Ritchie Blackmore didn’t like it. So it was shelved. As a song it builds and builds, it has some fine performances from the whole band, I love that line ‘You put your arms around me like a circle around the sun’  The climax of the song, however, is the guitar solo at the end by Tommy Bolin. The solo is double-tracked and this was a technique he used a lot.  Bolin used it to almost play against himself almost like two guitar players each taking turns to solo. The final flurry of the notes are like a waterfall falling down the side of a mountain, it’s just superb and it ends with Glenn Hughes sliding his hand down the neck of his bass guitar.

Come Taste The Band was ahead of its time…

Interestingly, Tommy Bolin is the only person not shown playing an instrument, but you could tell that he was a bit of a poser. This, in turn, influenced Glenn Hughes and David Coverdale who also threw a few shapes and ensure they looked good for the photos.  This version saw me through the 1970s and 1980s.

This is a pressing from Czechoslovakia – there are no photos of the band perhaps because of the way the communist government looked at young men with long hair?  There was a poster inside of a giant piece of fruit!

This is probably the only other vinyl version apart from the USA Warner Brothers pressing you really need.

The inner gatefold photos are not quite as sharp as the original but it is close enough. This is a double album with sides 1 & 2 being the remaster and 3 & 4 being the remixes.

This is not a bad sounding CD, however, there is a slight fault (a slight click) towards the front end of the track ‘You Keep On Moving’ which I thought was a problem with the CD, but it is also on the remastered version on the Listen, Learn and Read On Box Set So there must’ve been a fault on the original recording. You can hear it very slightly on the vinyl version if you have it loud enough!

This is the one everyone should have!  Great booklet, lots of rare photos and a full story behind the line up and album. The master is excellent but the remixes are something else. Plus you also get two bonus tracks (Same in L.A. and Bolin/Paice Jam). if you’re a fan of Tommy Bolin, Deep Purple and Come Taste The Band, the idea of there being any kind of bonus tracks, is like finding the Holy grail really. The real find is the jam between Bolin and Ian Paice. Bolin is shredding as if life depends on it!.

I have to say also that Kevin Shirley’s remixes are outstanding. The album sounds like it was released yesterday.

Two CDs packed full of jams, great photos and story in Vol 1. Real jazz fusion in places and a chance to hear what might have been. Tommy Bolin feeling right at home with the band and music. So he must’ve felt quite frustrated when he was kind of, kind of shoehorned into playing so much of the old purple stuff when they started to tour. I would recommend these to complete your Come Taste The Band experience,

As I said at the start this album is in my top three Deep Purple albums and it would be my Top 10 albums If I had to run away and live on a desert Island, Come Taste The Band would be one of those albums that I’d have tucked under my arm! 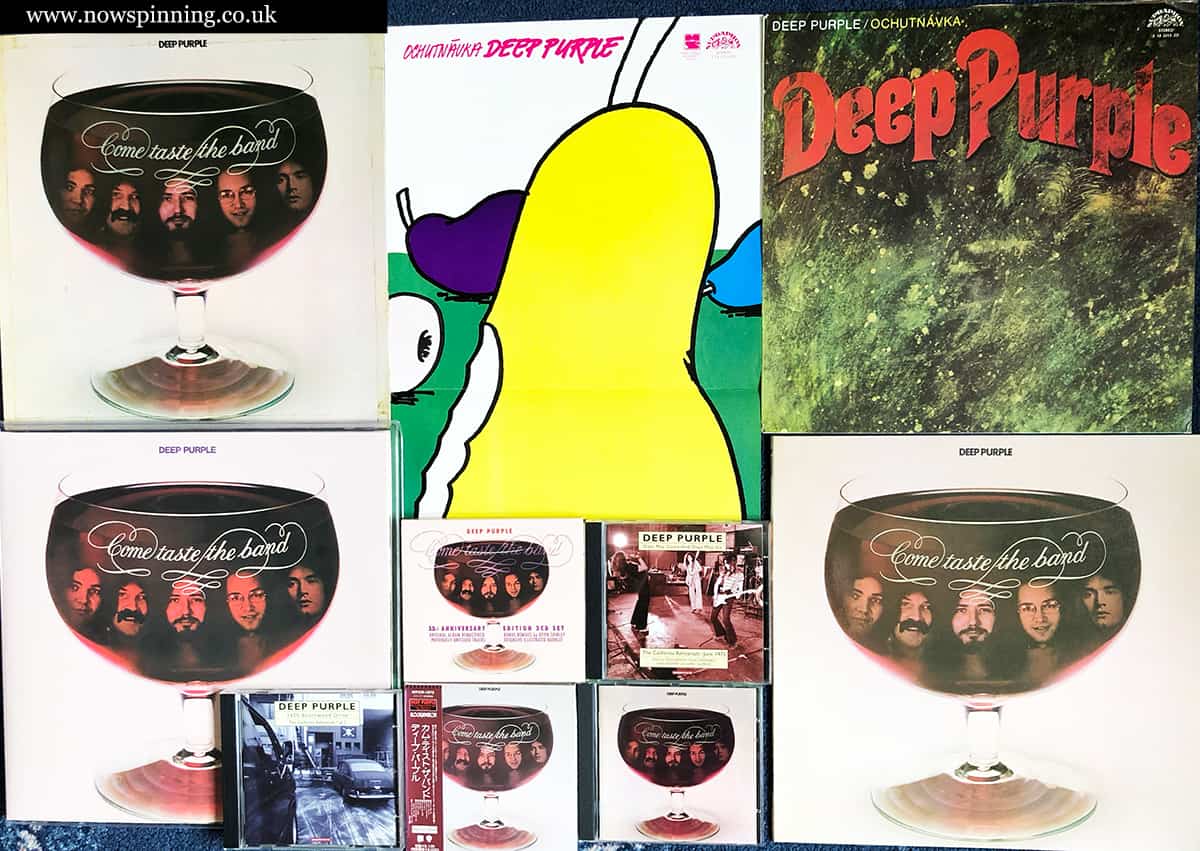