This video is about finding that rare record, the one record that you have been after for a long time.

In the video, I do not actually review the album, as I wanted to talk more about the actual journey of tracking down rare records before the internet. However, I have reviewed the album in the text below.

The record that eluded me for such a long time (we are talking years) was ‘Going Back To Colorado’ by Zephyr. You can see in the video I have kept the price sticker on it saying £30. The copy I eventually found was also a Promo Copy and you can also see the ring wear on the cover showing that this version had seen some life before I eventually found it!

The original vinyl album was released in 1971 and the reason it is so important to me is that I’m a huge fan of a guitarist called Tommy Bolin. Many of you will know this already due to the number of posts and videos I have done where I mention Tommy Bolin and the various bands he played with during his short life.

I became a huge Bolin fan after his stint in Deep Purple, I never saw him live because I was such a huge Ritchie Blackmore fan, and I could not imagine Purple with another guitarist (more fool me!). So, after Hearing Come Taste the Band, I bought Teaser, then Private Eyes, then progressed to Spectrum by Billy Cobham (which introduced me to jazz and jazz fusion). After this, I bought his albums with the James Gang, Alphonse Mouzon, Moxy and finally discovered Zephyr. I managed to find the first Zephyr album at a record fair but the second one was to prove far more difficult.

So from 1976 to 1991 I searched everywhere for this album. I had never heard one song from it, there was no YouTube or Spotify, and none of my friends had it or had heard of it. I even wrote a letter to the head of the Deep Purple Fan Club asking what it was like! (No email back then either). He replied, saying it was really good, I then asked if he would tape it for me, but he never responded. So I guess that was a bit cheeky!

I had only seen the front cover in a magazine, I had no idea what the back cover even looked like. Now you would just search Google images.

Then one day in 1991,  during my lunch hour in Birmingham, I wandered down to the bottom of Corporation St and went into a Record Shop called The Plastic Factory.  (Many years before the same shop had been the original location for the fledgeling Virgin Records).  As I always did in those days I would browse every record bin from A-Z, and as I got to Z, with just a few minutes left before I had to head back to work, it appeared. A Promo Copy of Going Back To Colorado by Zephyr. It was £30, I took it out of the cover, looking at the sleeve, the credits, the photos, I could not believe it. But it was £30 and I was getting married soon and money was very, very tight back then.

I went back to work, but my mind was just on this album, I rang my wife to be Sue, and said, “I have found this album I have been after since 1976, and it’s £30. What shall I do”? Luckily she said, “Just buy it!”. I then switched from thinking I cannot afford it, to thinking, what if someone else has now found it and it has gone?!

So, as I finished work, I literally ran across Birmingham Town Centre as fast as I could to get to the shop just five minutes before it closed. It was still there, I picked it up, took it to the counter, handed over my cash, and it was mine! After all those years, I finally had a copy. I still had no idea what it sounded like, but now that pleasure awaited me.

I got home and carefully took out the album (which looked in mint condition) placed it on the turntable and watched as the stylus gently landed on the start of track one, side one.  The album opens with the title track Going Back To Colorado and the first thing that struck me was how much more mellow Candy Stevens voice was. The album was engineered by Eddie Kramer and this was a much more polished album than the first one. Tommy Bolin plays some really powerful and assured slide guitar on the title track.

Miss Libertine is next up, and Candy sounds great on this. The songwriting is excellent and the music is varied and powerful. The music was blues-based but also had  R&B, Jazz and funk within it. Bolin plays a short Wah Wah guitar solo, but this melting pot of influences made him perfect for all the projects he later became involved with.

The third track is Night Fades Slowly which sounds like late-night jazz with a lovely flute solo by John Faris accompanying the strong vocal by Candy. The Radio Song is a short Rock n Roll song before we head into one of the main tracks from the album See My People Come Together. This track would appear on the Tommy Bolin 2CD compilation ‘The Ultimate’ and it features some fantastic soloing by Tommy Bolin. You can hear ideas and licks he would use again during his career. The song moves into an almost psychedelic middle section again with flute and a powerful performance from the whole band. Tommy uses his echoplex here which was also a big part of his sound. Bolin then answers Candy’s vocal lines with lightning-fast guitar lines.

Here I was hearing this album for the very first time, my expectations were so high, but I was not disappointed at all.

Side Two opens with Showbizzy which starts like Deep Purple’s Fireball before morphing into a hard-charging jazzy rocker. This is another highlight on the album for me. This is perhaps where they were heading if Bolin had stayed with the band. There are some great riffs in this track and the guitar solo at the end was something that Tommy would use in Deep Purple a few years later.

Keep Me is a tender almost gospel-based ballad, which is then followed by the laid back Take My Love. The music has a bit of a Doobie Brothers vibe, and features plenty of room for instrumental prowess by Faris. If anything, it was crying out for a killer guitar solo, and you can almost hear one start during the fade out.

The last but one song is I’ll Be Right There which is a country-based song with some cool slide work from Bolin and gentle keyboard backing from Faris. I must mention again how well the vocals from Candy Givens fits in with the music.

The final track is another ballad At This Very Moment composed by Candy, and it features some really mature playing from such a young band, and there are some lovely guitar embellishments from Tommy on this.

So there it was, my first listen to an album I had been hunting for many years. Now, of course, you have YouTube to check it out and even the CD Versions are not that hard to find.

I have two CD versions – the Warner Archives Edition and the 2CD 45th Anniversary Edition from 2016, which also has some live and bonus tracks. However, it will always be the vinyl version which remains special to me.

Hopefully, this story will resonate with some of you old enough to remember a time before the internet and eBay.

Let me know what it was like for you when you were searching for that elusive album! 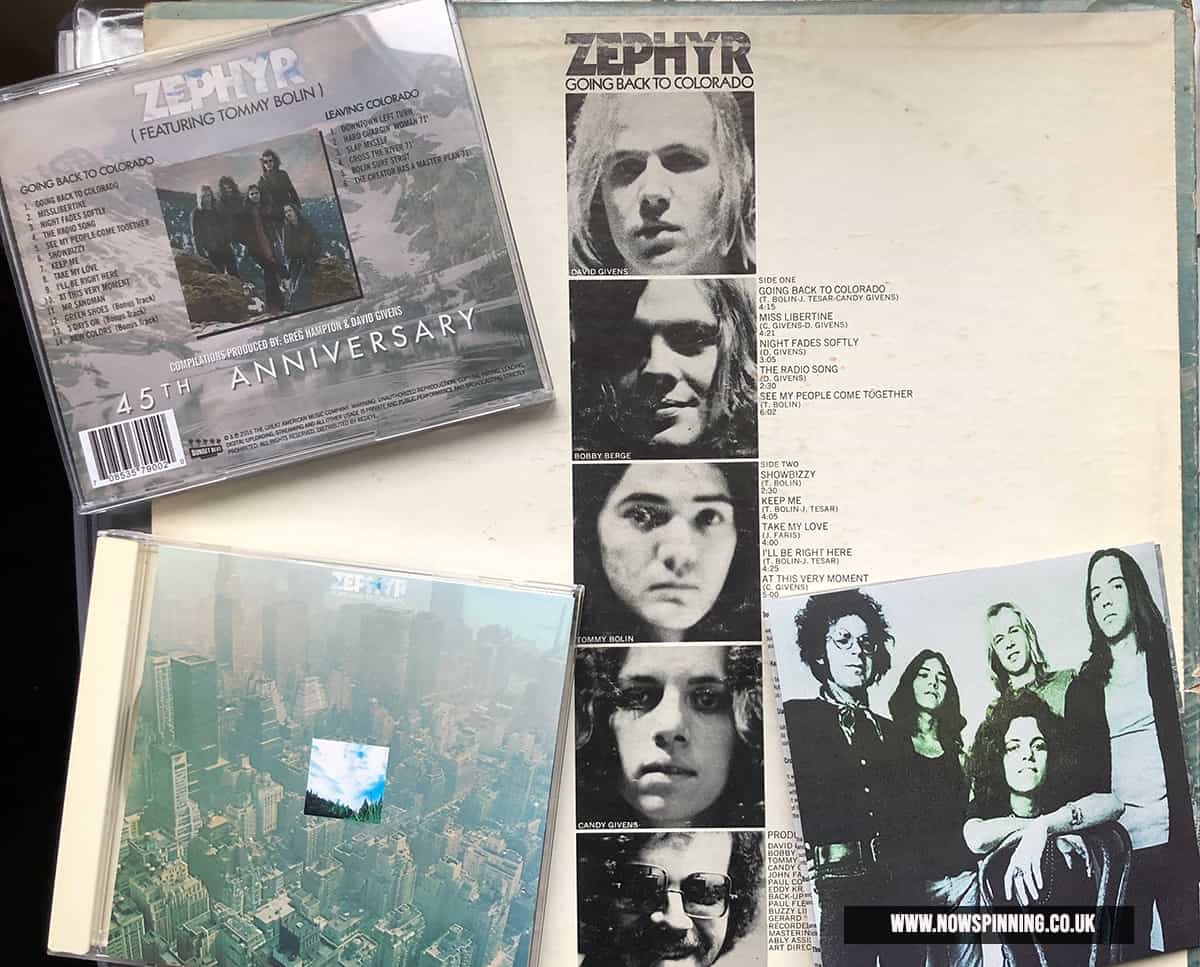 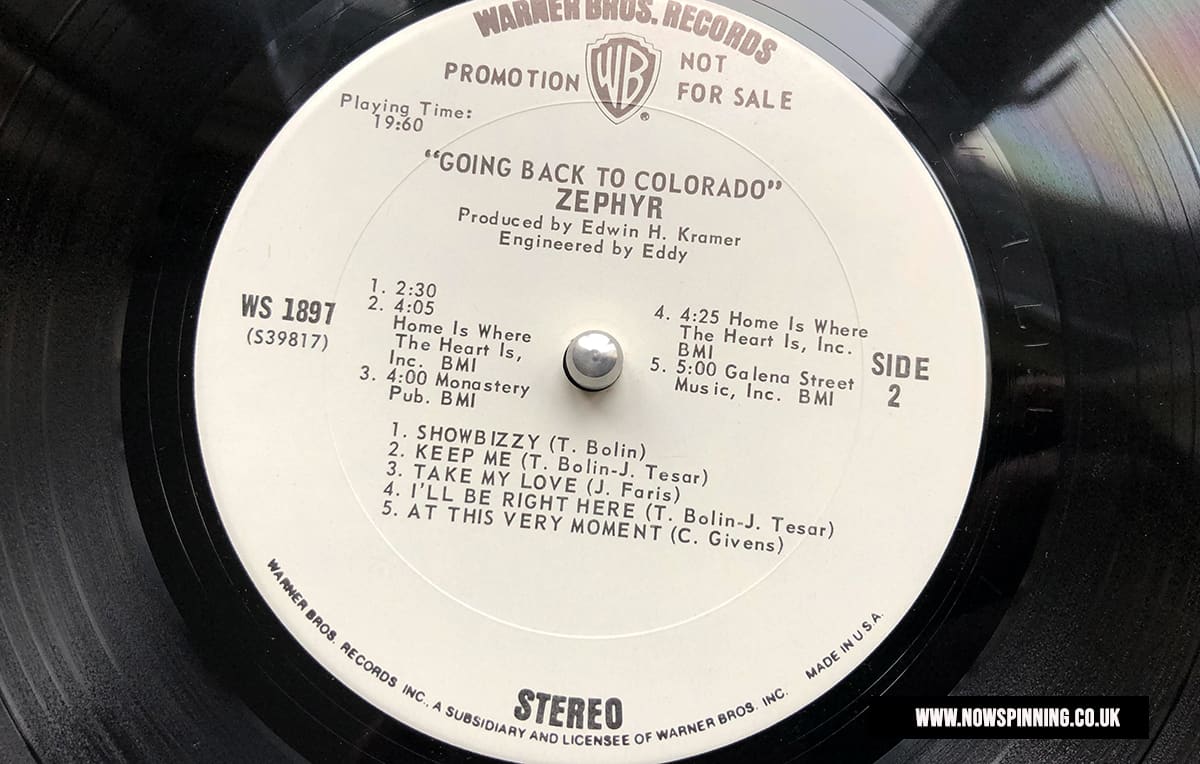