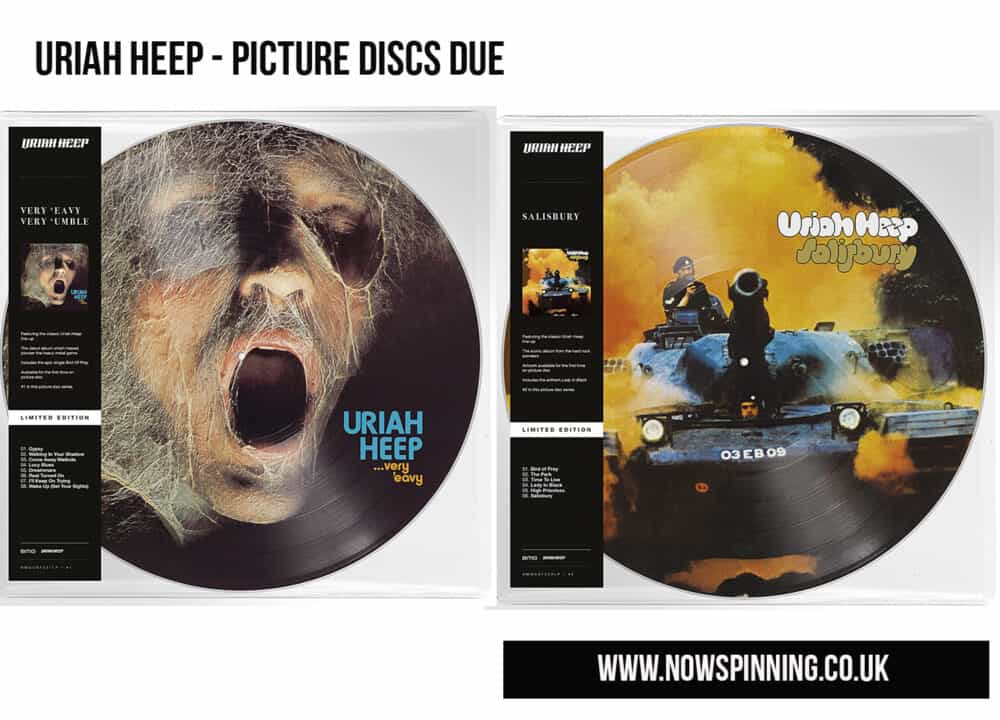 Very recently BMG released the ‘Every Day Rocks’ Box set which featured a picture disc and T Shirt covering the first seven Uriah Heep albums. This was a very expensive set and itself was coming on the back of the 50 Years Box Set and the 6CD Choices Box Set.

I am not sure how successful the Every Day Box Set was but I am pleased to see the picture discs are going to be available individually.

The first album sits at the top of the mountain when it comes to the first real Heavy Metal albums. Rock historians and musicologists might quote Deep Purple In Rock, Black Sabbath and Led Zeppelin but this debut album by Uriah Heep should be there with them.  It maintains some 60s sounds in places but the Hammond organ charged and riff-heavy Gypsy is a classic of the genre.  The scary artwork features original frontman David Byron on the front unrecognisable beneath cobwebs.

Salisbury from 1971 is a PROG masterpiece and the progression from the first album is incredible. This is one of my favourite albums by Uriah Heep and it contains the 16-minute title track which I cannot help think was influenced by Deep Purple’s experiments with an orchestra a couple of years before.  The album also includes the evergreen hit ‘Lady In Black’.

Choices, a personal selection of Uriah Heep hits and deep cuts from across the band’s exceptional career on 6 CDs, is available here.

Am I the only one who has no interest in picture discs? What I look for is a good pressing of the album in its original jacket with any inserts, etc. at a price I can afford. Picture discs are collectables, and that’s not the reason I buy music.

Sorry to be negative, but I’m still smarting over the abandonment of the 2-CD series after, what was it, five albums? I’d of much preferred they spend their money on more of those than this. But I guess Vinyl is all the rage…..

Hi David,
Your comment is very valid, I am also upset that the 2CD series was not continued. To be honest the 50 Years Anniversary Box Set could have been so much better. Vinyl. Phil