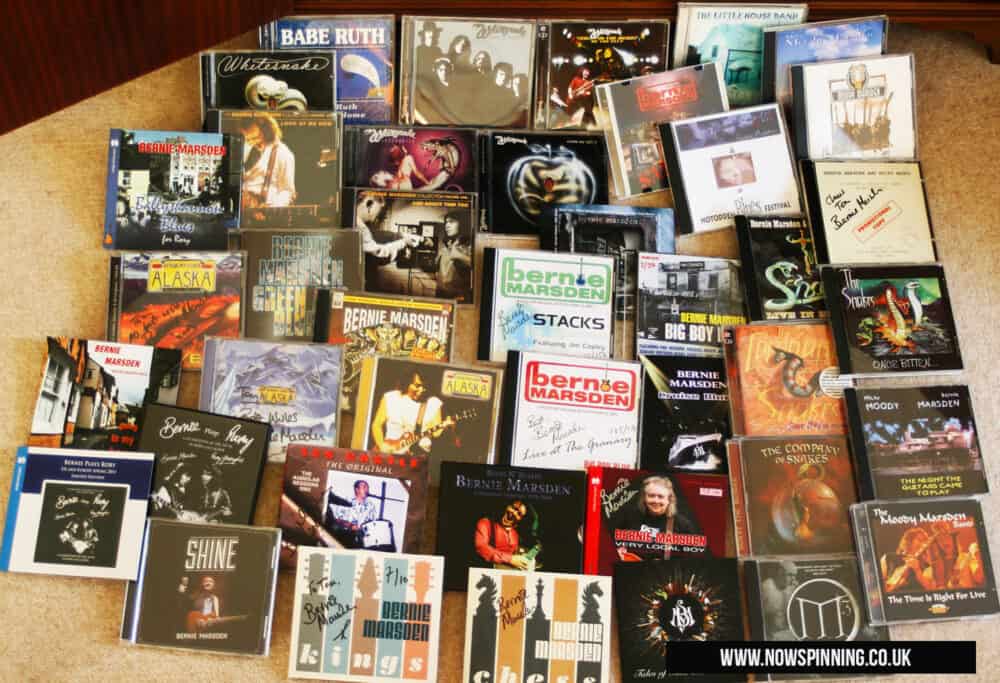 It does irritate me a little when I mention Bernie Marsden and most people say, “Oh yeah, Whitesnake”. Well, yes of course, but what about his early strokes of genius before he made such a significant contribution to making Whitesnake a success?

Such is the extensive body of work of Bernard John Marsden, that we felt it About Time Too (see what I did there?!) that an overview of this hugely talented guitarist, singer and composer was assembled.
You might have guessed that I am a major fan of Bernie and to top it all, he’s such a nice bloke. I met him, albeit briefly, in the foyer of what was then The Colston Hall in Bristol. I was there to see Deep Purple on their 1996 UK tour and he took the time to shake hands and chat for a few minutes. I saw him again later on stage alongside another guitar hero, Steve Morse, for (inevitably) the Smoke on the Water encore.

I am not going to go through Bernie’s history; that is far better covered by the man himself in his very good autobiography ‘Where’s My Guitar?’. Instead I will try without bias, to cover some of his extensive work but, be warned, if you love guitar playing of the highest order, it will cost you!

So what is it about Bernie that turned me into a rapacious collector of everything he’s ever done? Well, my fascination began when I bought the 1977 Jon Lord, Ian Paice post Purple implosion release with Tony Ashton; the sadly underrated and magnificent Malice In Wonderland by PAL. I bought it because of the Deep Purple connection – another passion – and was immediately struck by the high quality guitar playing that held its own behind the twin keyboard attack of Lord and Ashton.

His instinctive feel and rhythm were obvious and the solo he delivered on ‘Silas and Jerome’ made me sit up even more, as did his riffing, vocals and superb slide solo on ‘Sneaky Private Lee’. If you don’t have this PAL album, go for the reissue on CD as it has tracks that were slated for the second album that eventually saw a release in 2001…and it has the simply superb ‘Steamroller Blues’ with Bernie doing all the vocals and some stunning guitar. The die was cast and I began to search out his previous work, which was no easy feat in those halcyon, pre-internet days but I knew a patient record shop owner who would trawl ‘the big red book’ that listed all releases by all labels. Together, he earned a fortune as we found some of the albums I craved.

With his help (thanks, Chris) I tracked down the Babe Ruth albums: ‘Stealin’ Home’ (1975) and ‘Kid’s Stuff’ (1976) which, to be honest, are completion necessities only. I’m afraid the vocals from two different ladies can be a bit overpowering but there are still some gems…and the guitar playing is already exemplary from Bernie so early in his career. ‘Kid’s Stuff’ also features Don Airey on a couple of tracks and Neil Murray on three for a further ‘Snake/Purple connection. Try ‘Say No More’ on the former; a song that showed pointers to Bernie’s next band or ‘Living A Lie’ from the latter platter as Bernie does the vocals and some neat blues rock playing.

Before we move on, his early work, including some previously unavailable songs, was (partially) covered on the double CD ‘Blues ’N’ Scales: A Snakeman’s Odyssey’. For a fanatic like me, it was the first CD that appealed most as it had Skinny Cat and Wild Turkey tracks that I didn’t have…the remaining selection, I already owned. 38 tracks in total and seven I didn’t have, which I considered a bargain and the double CD is a good starting point if you’re unfamiliar with his non ‘Snake output.

In 1978, blues rock history was made with the release of the 7”, white vinyl, ‘Whitesnake’ EP and the sign of things to come with the superb ‘Come On’. Bernie’s abilities and importance continued to grow on his subsequent appearances on ‘Trouble’, and Coverdale even gave him vocal duties on the complex ‘Freeflight’, although the title track always wins as my first choice. Then came the controversially covered ‘Lovehunter’ in ‘79. What couldn’t be disputed was the excellent music and the mantra I still follow…’Walking in the Shadow of the Blues’. 1980 brought us ‘Ready an’ Willing’; another strong album and my pick is the underplayed ‘She’s A Woman’ which has riff, blues, a great bass line from Murray, drums from Paice and synthesiser like it should be played from Jon Lord and, of course, Bernie.

Then came the second best live album (after ‘Made in Japan’, of course) with ‘Live…In The Heart of the City’ and the birth of the ‘Whitesnake Choir’ as well as stunning performances from every member: the slide masterclass from Micky Moody on ‘Lovehunter’, the genius interpretation of Purple’s ‘Might Just Take Your Life’ with Bernie doing a cracking job on the Hughes parts. ‘Come an’ Get It’ followed in ’81 and behind DC’s ever increasing smuttiness (I still can’t believe he got away with the closing line to ‘Would I Lie To You’ even in the 80s) there were more stunning compositions…’Child of Babylon’ is an epic. Next came an album of brilliance that hid the problems in the band – ‘Saints and Sinners’; as I said, Bernie tells the story better and honestly in his autobiography, I’ll stick to the music and pick the even bigger epic that is ‘Crying in the Rain’. Coverdale would re-record this and, of course, ‘Here I Go Again’ but these are the definitive and the best versions.

Don’t forget that during his time with ‘Snake he released two very good solo albums: 1979’s ‘And about Time Too’ including the lovely blues of ‘Brief Encounter’ and 1981’s ‘Look at Me Now’ with the very ‘Snakey ‘Who’s Fooling Who’ with DC guesting.

So that was the end of Bernie’s time in Whitesnake and he began searching for the correct set up to realise his creative visions. A band called SOS didn’t work out or record and then Alaska, who had two releases, 1984’s ‘Heart of the Storm’ and 1985’s ‘The Pack’, before breaking up. To be honest, they weren’t that great: sort of AOR and with a middling singer but with the odd highlight…’SOS’ or ‘Too Much’ are worthy. Then came a bit of a hiatus as, to me at least, Bernie’s activity was invisible. The good news was that the 90s arrived and Bernie (after a few sessions like the Forcefield series with Cozy and Bonnet and with Walter Trout amongst others…all of which I managed to track down and buy) emerged with his old guitar partner, Micky Moody and began a fruitful and thoroughly enjoyable period of often limited releases and many a great concert…Bristol Bierkeller in particularly sticks in my mind for a superb performance.

The pair used various monikers and backing musicians – The Moody Marsden Band, M3 (the third ‘M’ being their old friend Neil Murray), The Snakes, Company of Snakes. Their live concerts and albums were biased toward songs from their Whitesnake days, but also included classic blues songs and originals from studio albums, Real Faith, Ozone Friendly (slightly different track listing on these two): try songs like “someday’ or the title track. The absolutely essential albums are the simply brilliant live recordings: Now’s The Time For Live, Never Turn You Back On The Blues, When The Guitars Come Out To Play and the stunning Live In Hell: Unplugged. Incidentally, Hell is a real town in Norway that hosts blues festivals most years. Every track, including Moody singing “Mr Marsden has broken a string” during Robert Johnson’s ‘Last Fair Deal’ and the eight-minute ‘Spoonful’ as it should be done or the wonderful live performance of the instrumental ‘Belgian Tom’s Hat Trick’…take it from me, every track is a highlight.

Then there are Bernie’s solo recordings most of which I bought direct from his website and so got signed copies at no extra charge. Of the wider distributed releases, look out for the great sessions from Tommy Vance’s Friday Rock Show, the excellent tribute to Peter Green called ‘Green and Blues’ and his 2014 big label release ‘Shine’, which is worth it for the version of ‘Linin’ Track alone. Oh, don’t tell Eric, but I also have a good quality bootleg of Bernie at the Notodden Festival when he did a concert alongside Snowy White.

The real gems however, were the website CDs that covered Whitesnake, blues standards, original compositions and a couple of Bernie’s take on the great Rory Gallagher…these were done with the full approval of Rory’s estate and the two copies I have: ‘Bernie Plays Rory’ and ‘Bernie Plays Rory Spring 2011’ are brilliant readings of Gallaghers songs albeit with duplications. The same is true of the third one, ‘Ballyshannon Blues for Rory’; worth every penny to ensure I had every track. Rory was revisited again, but with ‘Snake and originals on the acoustic band live recording called ‘Going To My Hometown’. The ‘Big Boy Blue’ releases also led to duplications but again, worth it for the different takes and different songs. CDs that leant a little toward the soulful side of the blues were also an essential buy: The ‘Ironwork Sessions’ and ‘Stacks’ are still bluesy and rocky and the latter has a fascinating take on ‘Purple Haze’. Obviously his last two CDs, ‘Kings’ and ‘Chess’ are still available on Bernie’s site and they are the definition of well thought out and played tribute releases, in this case to various blues masters, and are also essential.

There are others that I class as essential listening but this is an overview not a discography, so I will only add a couple of ‘oddities’: Bernie contributed one track to the German TV movie Frankie (and appeared in it) and one track to the British movie, Still Crazy; no cameo but still a decent film with Bill Nighy, Billy Connolly and Jimmy Nail amongst a stellar cast.

There is only one CD I am missing to be completely complete: a CD under the name of The Majesticaires was available at some of the Moody Marsden gigs (as was the Little House Band one I do have), but one day I will find it! I haven’t yet seen the TV series where he was the art director, producer, and author of the three part TV series, The Delta Blues, but I will catch it soon.

So there we have it: a brief overview of one of the best British guitarists to ever grace a stage or studio. I hope the insight into his solo career is especially helpful and you can actually find the CDs…maybe Bernie will re-press them?

If anyone says to you “oh yeah, Whitesnake”, well now we know differently.