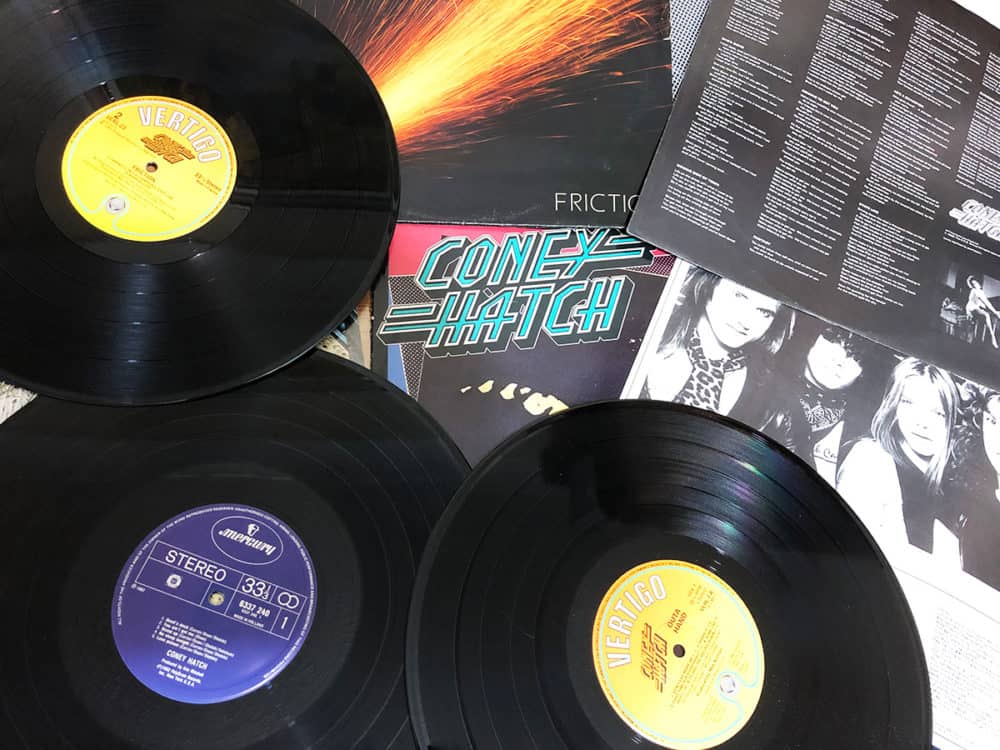 Coney Hatch – They Could Have Been Huge

Being signed to the same label as Bon Jovi and Def Leppard must have felt like a good deal in the mid 1980s.
However, when those two bands really took off all the marketing money stayed with them and Coney Hatch got left out in the cold.
They might be seen as a footnote in the glory days of melodic rock but Phonogram missed a trick here and could have had three successful bands rather than two.
I think the problem is they had two vocalists and both played instruments. We have to remember that bands with a dedicated lead vocalist did seem to prosper more than those that did not.

Coney Hatch : Outa Hand : 1983
Produced by Max Norman – the band were leaning more towards the sound of their more succesful label mates but still creating their own identity with tracks like ‘Don’t Say Make Me’ and ‘First Time For Everything’.
The Rock Candy Remaster includes 3 bonus tracks

Coney Hatch : Friction : 1985
Produced by Max Norman – For this album they had been told by Phonogram to choose one vocalist. They chose the right one and for me they sounded much better for it.

This is a classy melodic rock album and every track is great especially ‘This Ain’t Love’ ‘She’s Gone’ Wrong Side of Town’ Girl From Last Night’s Dream’ ‘Burning Love’ etc. It was also the album where Photogram pulled the plug, after which they soon lost the will to continue and broke up.

There is a fab ‘Spinal Tap’ moment in the booklet where the band seriously talk about their idea that got rejected for the album cover.
“We were at this mansion, which had an amazing gothic staircase. So, we got the idea to get a scantily clad female model to slide down the banisters, at the bottom of which was a gargoyle with red eyes. This was going to be the cover but it got rejected – We thought it was great, she was not even naked”
The Rock Candy Remaster includes 1 bonus track

Coney Hatch : Four : 2013
28 years later the band returned with a new album and it sounded like they had never been away. This very much deserves to be seen as a return to form even if the market for for this style of music is a lot smaller than in the mid 80s. 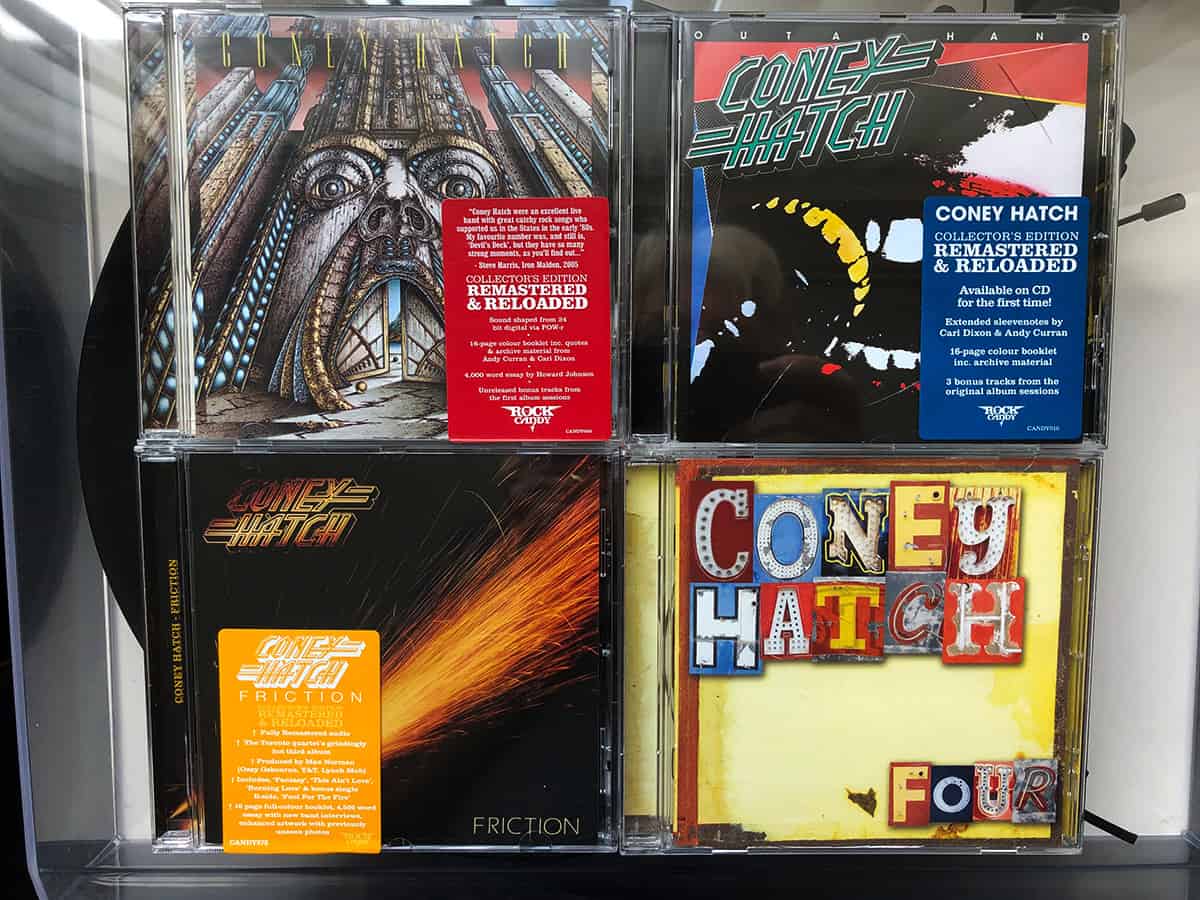 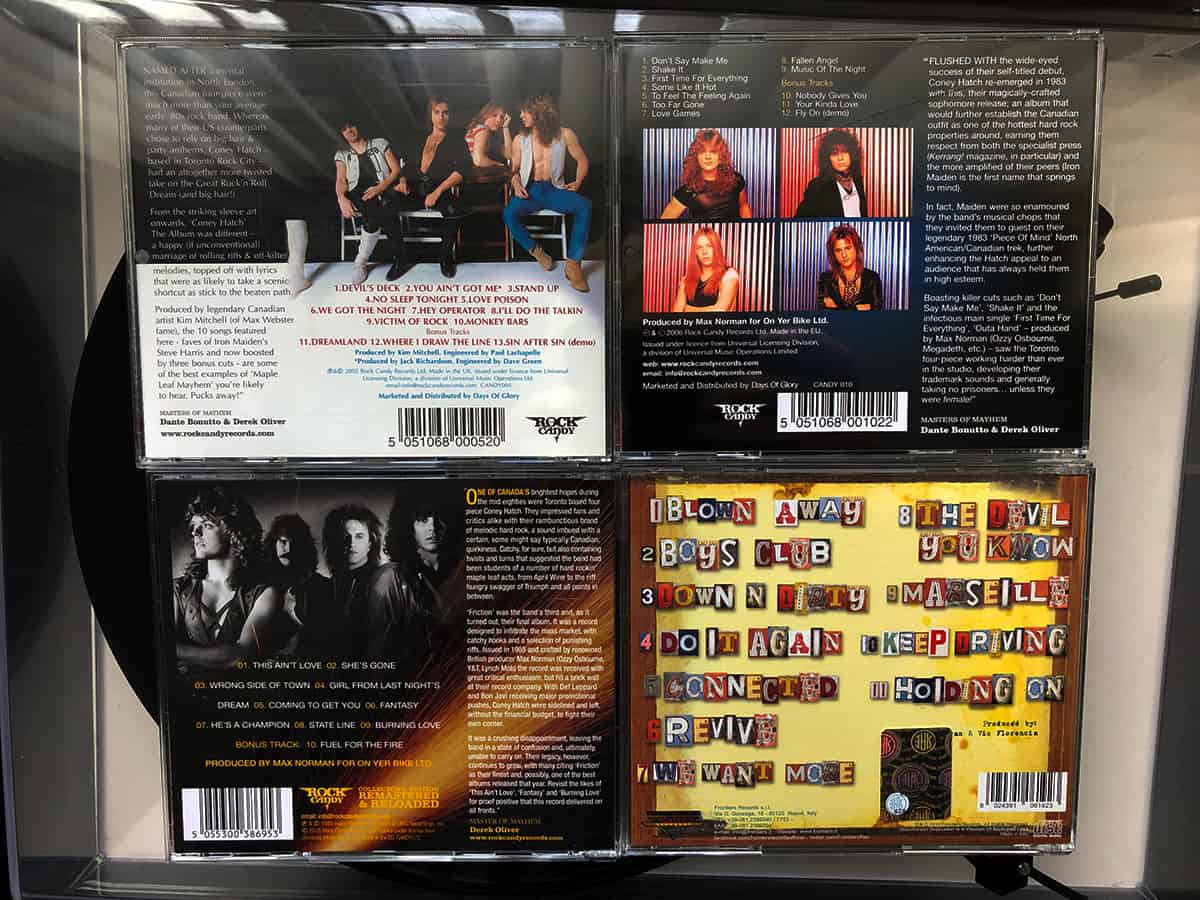 Phil, Coney Hatch were a Canadian band that were signed to Anthem Records, the home of Rush and Max Webster. With exception of their tune “Hey Operator”, I don’t recall Canadian radio playing many Coney Hatch tunes. That’s a bit odd in light of the Canadian content regulations that our radio stations must adhere to. So I would say that Coney Hatch had only a modest impact here in Canada. By comparison, Max Webster really deserved far more international success than they received. They released some wonderful recordings.