In today’s video review, we’re going to look at the band Ratt and specifically the box set The Atlantic Years, which has been issued by Cherry Red Records. It features albums released between 1984 and 1990.

So let’s have a look inside the box and see what you get for your money. Some collectors will be thinking that these five albums have been released before on the ‘Original Classic Album’ series. Indeed they have, but they sound very, very different here and are much improved.

The CD Box itself is a glossy and sturdy clamshell box. The albums featured are ;

It is a shame that the mini-album could not be included prior to Out Of The Cellar but you do get some extra tracks from MTV unplugged, single edits and Nobody Rides For Free from the film soundtrack Point Break for Detonator.

It is a substantial release and for the £20 to £24 pounds a real bargain. It doesn’t come with a booklet, which some of you will be disappointed with, and I know there are probably some cost implications here with paying a writer and the extra pages etc, but a lot of fans that buy these do like to read and look through the booklets. This is the CD equivalent of looking at the sleeve notes on a vinyl record. What you do get is a foldout poster which gives you all the credits for each album and photos of various versions of the albums and singles from around the world. There is quite a bit of memorabilia so some thought has gone into this.

So then we come to the albums themselves. They are all single sleeves which are fine as the original vinyl albums were the same. The reproduction of the artwork is very good and all the credits are included on the foldout poster, so there is no need to strain your eyes trying to read the back of each sleeve.

Out Of The Cellar is the one most people will remember, the cover features the then future Mrs Coverdale on the front. Ratt were in many ways were head and shoulders above a lot of the other Rock and metal bands at the time. They were much more than just a heavy metal band (or a hair metal band as they became seen as).

Ratt had a lot of pop sensibilities and they had great chart success especially in the USA. In fact, Round And Round has recently been back in the charts after being featured in a recent advert over there. Ou of The Cellar is probably the album that most people know and play the most as it has some absolute classic tracks on it. In fact, it is a total classic with Wanted Man, You’re In Trouble, Round and Round, Lack of Communication, Back For More, The Morning After etc.

The second album was Invasion Of Your Privacy which has one of the best sounding opening tracks ever recorded (You’re In Love). At this point, I have to mention the remastering of these albums which is superb.  If you have the previous CD editions, you will certainly notice a big difference. I am not just talking about volume for volume sake. There’s more definition in the overall soundscape between the instruments. It really is a top job. Just listen to one of the other stand out tracks from this album Lay It Down and you will see what I mean.

Next up was Dancing Undercover was not such a big hit in the UK, but in the USA it was still a big album. From this point in the late 80s many heavy metal bands started to look and sound quite similar and Ratt got lost amongst the noise.  This was a shame as they were still creating their own path and sound. The final two albums in the set Reach For The Sky and Detonator are still very good albums and I have found myself playing these more since getting this box set.

The passage of time has been very good to Ratt and all of these albums sound just as good to me as they did when they first appeared.

If you’ve got any ideas for future reviews, or you’d like to see your album, your band, or your box set reviewed by Now Spinning, then please get in touch. 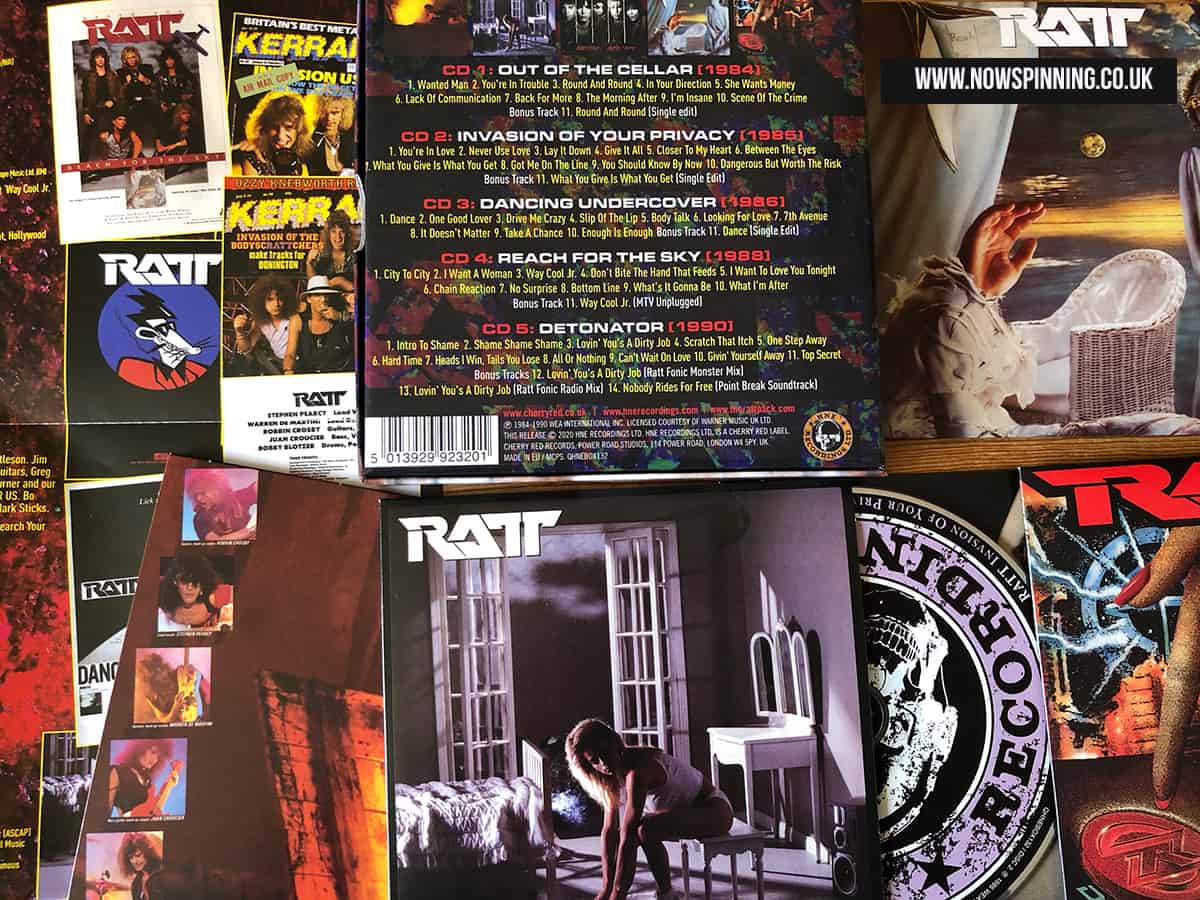