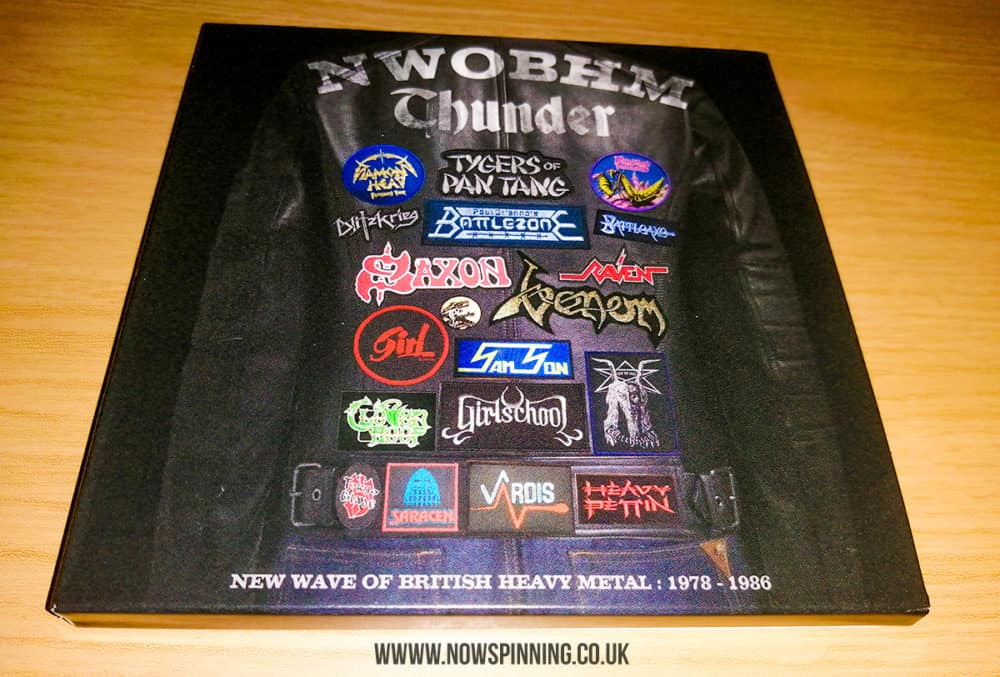 I’m 15 again. If only. Well for a few hours at least I’m back in 1980 and the NWOBHM is in full flow. Iron Maiden and Saxon are on Top of the Pops. The new religion has its own Watchtower with Sounds preaching the devil’s music to the masses. Macho males discover the joys of sowing. Well, those patches won’t get onto the back of the denim jacket by themselves and you can’t wait for your mum. The hair got longer, dandruff became an issue. Air guitars are hoisted upon high, worshipped by many a budding six-string god in front of mirrors all over the land. Air drumming became an industrial hazard if a safe distance wasn’t maintained.

For thousands of male adolescents of a musical bent, the tail end of punk around ‘1978 felt like we’d missed out. The awakening was there at the fringes of the death knell of punk but we wanted our own fad, our own scene. The NWOBHM came at just the right time to save us from the hell (well it seemed so at the time) of the other scenes, The New Romantics and New Wave. God forbid we got sucked into those. We needed it loud, hairy, dirty and above all ….even louder. Our heads were being filled with Heavy Metal Thunder and we welcomed it with open arms.

Forty years later and thanks to those wonderful chaps at HNE Recordings those days are revisited for a second time following their 2018 Winds of Time collection with another 3cd set celebrating NWOBHM Thunder 1978-86 with a selection of nuggets, from bands both famous (Saxon, Girlschool etc) and unknown to only the most deeply devoted follower of the genre (Siege, Liason for example)

Thankfully compiler John Tucker, renowned NWOBHM scribe, hasn’t gone for the obvious. While the lead track on disc one Saxon’s aforementioned Heavy Metal Thunder will be maybe the best-known track with its glorious opening guitar riff the rest are a mix of album tracks, singles and b-sides across the three discs. Paul Di’Anno’s Battlezone provides the standout track on the first set, the epic The Land God Gave To Caine from their 2nd album from the extreme of the era in’1986. Praying Mantis do their best Blue Oyster Cult-ish vocal stylings with Flirting with Suicide. Venom’s Live Like An Angel Die Like A Devil, the b-sides to their debut single may not have stood the test of time too well but if not for the Newcastle lads many a US thrash band may not see the light of day.

Talk of USA thrash brings disc two’s first track. Blitzkrieg’s ‘in-the-studio’ live Inferno and the influence on the early days of Metallica of this and their self-titled track brings to mind, perhaps unfairly, Mr Hetfield singing this track in my head such is the band’s entwined musical DNA. An awful version of Green Manalishi from Mantas, having left Venom, leaves a bad taste but is thankfully washed away with a NWOBHM classic the Uriah Heep-esque Lady of Mars from Dark Star. It may have appeared on the second Metal For Muthas compilation back in the day but is worthy of any compilation of the era. Thankfully it’s one joy of this and the previous volume in this series that there is very little overlapping of the most recent celebrations of the genre but now wallet-busting Lightning to the Nations and ‘79 Revisited compilations.

It’s not all underground, slightly obscure metal. Glam rock gets a look in with Girl, the band of pre-LA Guns Phil Lewis and pre Def Leppard’s Phil Collen provide Hollywood Tease, a track that did enough damage in the charts to warrant a Top of the Pops appearance. Not to be outdone Tygers of Pan Tang also hit the chart with Love Potion No 9. Shiva could been the UK’s answer to Rush, not that an answer was needed but En Cachent, here in demo form, from their debut spoke of more glories to come.

Break The Chain opens disc three from Raven, yet another band from the North East. Prior to leaving for the States and major label action via Atlantic they never quite made the leap in their homeland to major league NWOBHM their thrash sound demanded. The USA meanwhile loved them. Heavy Pettin’ here with b-side Love Times Love, should have been huge and would have been if they were from LA and had really big label money. They weren’t the only ones though. Samson could have had it all. Lead by guitarist Paul Samson, they had one small problem in that they had arguably the best metal vocalist ever within their ranks. Not that we knew that at the time but Bruce Dickinson was off to the Premier League with Iron Maiden and you all know the rest. The powerful Earth Mother from their third album shows what could have been.

“What could of been” could apply to all the bands here. Jaguar (here with Another Lost Weekend) and Savage (Stevie’s Vengeance) both garnered great reviews for their respective two album a piece careers. Tokyo Blade (Dirty Faced Angels) maybe suffered from a line up that seemed to change for week to week, a problem that blighted many an NWOBHM band but Tokyo Blade still managed to put out some great albums for all that.

From that era. The great “what if” belongs to Diamond Head. For all the bands of the era they were going to be the one, heavy metals “Led Zeppelin”. It wasn’t to be, the debut album on which the legend was mostly built ( a legend built stronger by the Metallica, (them again!) benevolent society for NWOBHM bands cover version department), did lead to a major label signing but the album Borrowed Time from ‘82 from which In the Heat Of The Night is taken failed to match the debut despite a decent chart placing.

While it’s generally regarded as a macho male-dominated scene, the female’s did give the males a run for it. It Could Be Better, b-side to debut single Take It All Away, from 1978 pre-date all the tracks here and the term NWOBHM itself so Girlschool could put a claim in for the first single of the genre. Rock Goddess (Satisfied Then Crucified) followed in their footsteps proving that the girls could rock just like their male counterparts and none of us was really going to tell them any different were we, lads?

NWOBHM get an unfair raps from the general music press, a niche scene, but considering it has spawned two of the biggest rock acts of all time in Iron Maiden and Def Leppard it must of done something right. Not all of it, like any genre, is worthy of praise thankfully on this box set the already mentioned Mantas cover together with the butchering of Golden Earring’s Radar Love by Aragorn are the only real cringe moments which for 44 tracks is a fair return.

Lots of credit to HNE Recordings for this set and I hope that a third volume is in the works for the future. Maybe a reissue of the Lightning… and ‘1979 Revisited comps which would complete a marvellous trilogy. 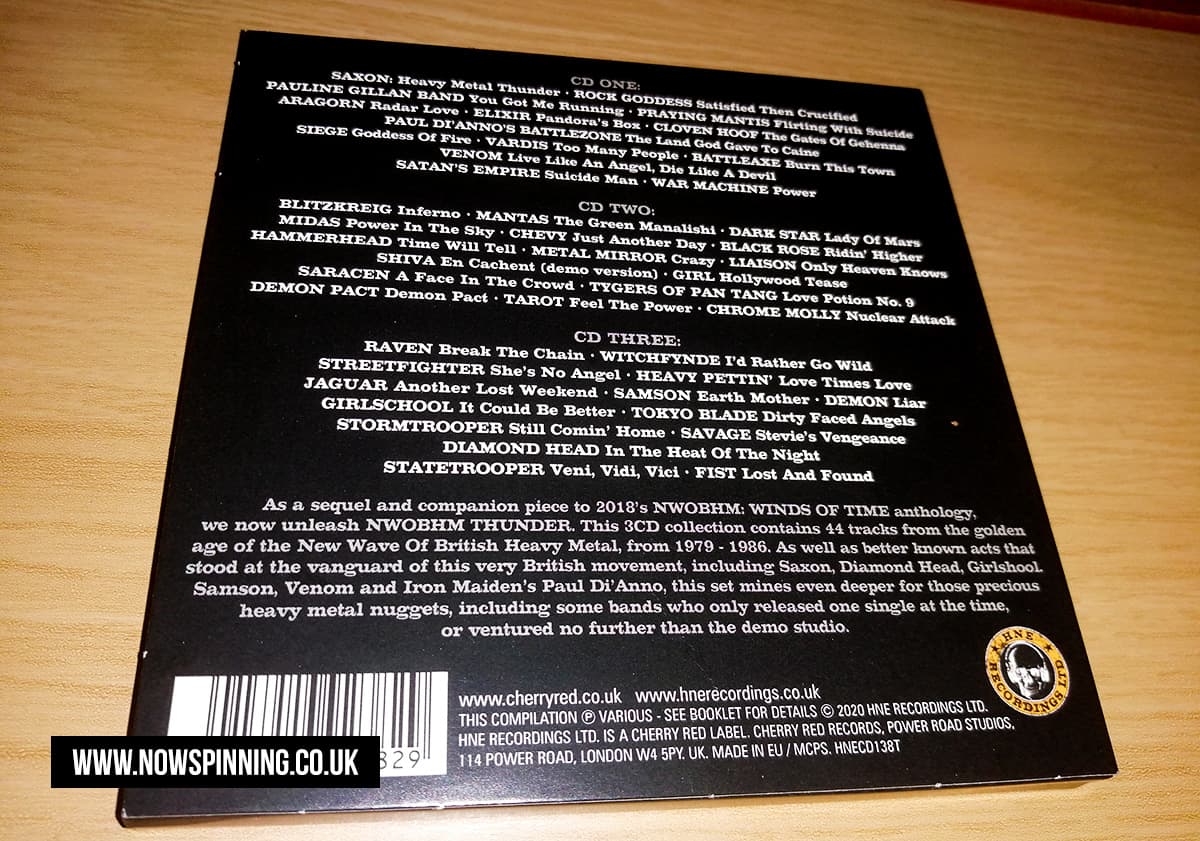 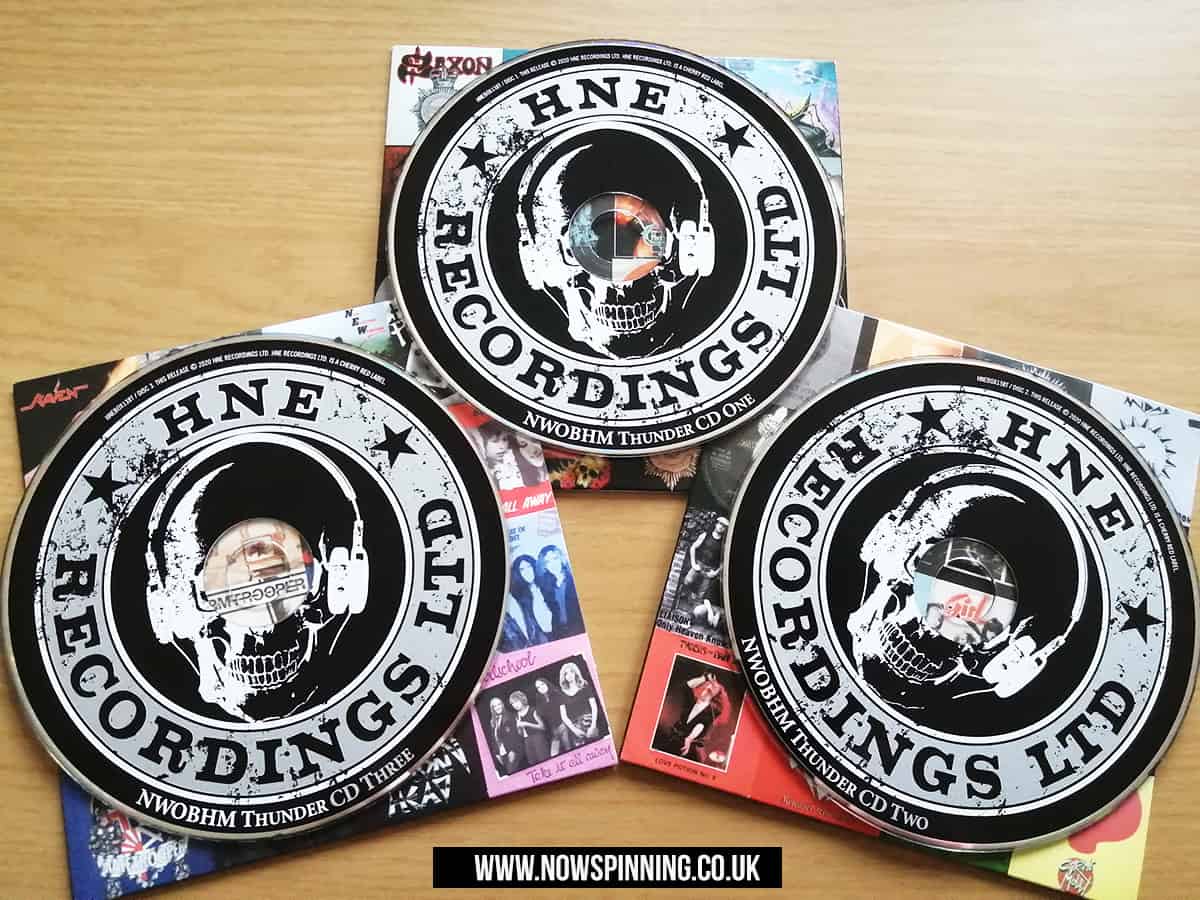