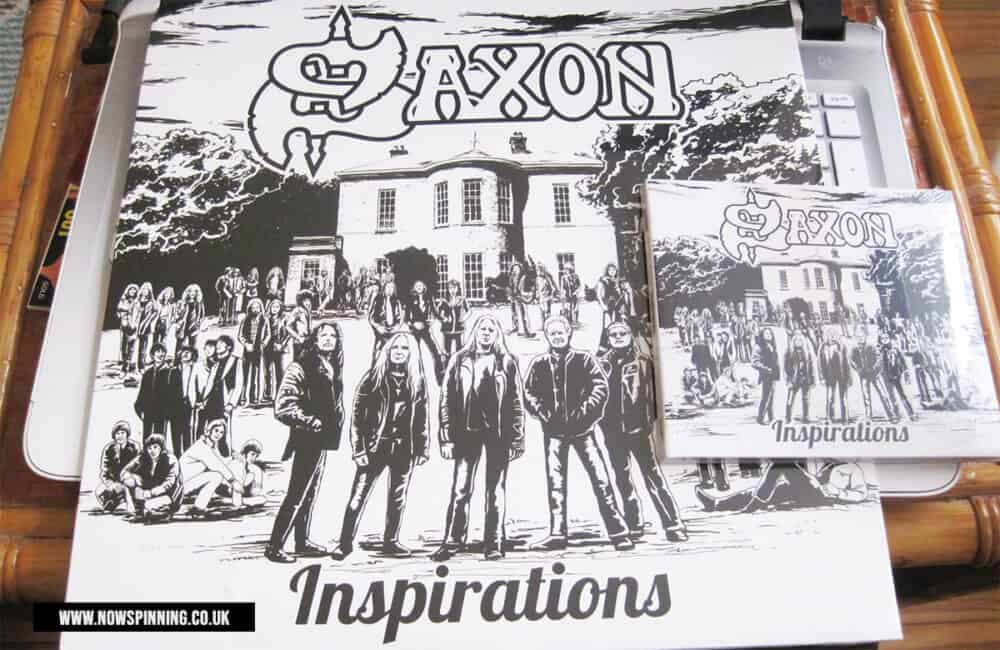 New Wave of British Heavy Metal legends Saxon have been riding a rather consistent purple patch for the last 20 years, and a string of excellent and successful albums have explored their roots (punk-tinged metal, classic rock, prog metal) as well as playing the kind of metal they themselves influenced, power metal and even symphonic metal too. Now, with gigs cancelled due to Covid (and vocalist Biff Byford’s health scare), and in the wake of Biff’s solo album, Saxon have gone into the dark depths of history and recorded an album of covers, rediscovering tracks that inspired the band’s roots.

When Saxon formed, two different bands came together, the prog band Coast (bassist and now vocalist Biff Byford, guitarist Paul Quinn) joined forces with the more bluesy Sob (taken from a Free album, featuring founding guitarist Graham Oliver and Steve Dawson). And given the strength of Saxon’s own songwriting, coupled with the fact that they have recorded very few covers previously, this change is welcome and justified. In fact, to date, outside of (collective or individual) appearance on the odd tribute album, Saxon had recorded just four covers; the Sweet’s Set Me Free, Christopher Cross’ Ride Like The Wind (check out the video on youtube, wonderful version), Willie Dixon’s I Just Want To Make Love To You and King Crimson’s In The Court Of The Crimson King. And mustn’t forget the classic Solid Ball Of Rock, written for them by Bram Tchaikovsky.

So to this album, and like Ace Frehley and Tesla, both of whom recorded two volumes, we get a full album of covers. And the first stand out is the album cover, a tasteful drawing of the band that also features all the other bands that are covered here.

Opener is the Rolling Stones classic Paint It Black, and this showcases great versatility in Byford’s vocals and a nice direction for the rest of the band. No room for a solo here but the renowned riff is played on nicely.
Who’d have thought Saxon cover a Led Zeppelin song, but here Immigrant Song sounds great, some great upper register from Biff, and some moody bluesy riffage too. At just over 2 minutes, it’s only a fraction shorter than the original but a real blast.

Then there’s The Beatles’ Paperback Writer and you do have wonder just how much fun the band were having in the studio; or they were on something, either way another enjoyable listen.
The Crow’s Evil Woman, well, the Black Sabbath arrangement, is next up, and gives Nibs Carter’s bass a chance to shine. They have changed the arrangement a little with the vocal harmony and the guitar work. And it works all the better for it.

Another interesting choice is the Jimi Hendrix song Stone Free, and the choice is applauded, as it’s one Saxon have put their own stamp on well. It also showcases the band’s bluesy roots well.

Motorhead’s Bomber is a storm and lovely to hear; I’ve seen the two bands play live together so often it’s nice to hear a studio version. Glockler picks up the pace on the drums nicely and Biff keeps his vocals his own rather than mimic Lemmy. Great guitar solo too – fans will love this one.

Then it’s on to Deep Purple and Speed King, another good choice as the vocal line (pace and pitch) is perfectly suited to Biff. It was one of Purple’s most metal moments so it done justice here, with the twin guitar replacing the guitar/Hammond duel.

Thin Lizzy’s The Rocker is definitely beefed up here, it’s a great track and a good version, but it doesn’t stand out like some of the other songs.

One of the more surprising choices is Toto’s Hold The Line, and one that I love. This one stands out because not only is it a great version of a great song, but the band have made a brave choice and held their own. AC/DC’s Problem Child works well too, it’s clearly outside Saxon’s usual style and they’ve not tried too hard to sound like the original; a blistering guitar solo and good vocal harmony in the chorus – nice.

The album closes with The Kinks’ See My Friends; this is a bit more psychedelic and melodic, Biff keeps it mellow and there’s an apt jangly drone to the guitar. After some of the more out-and-out tracks this is a good closer.

I love some of these versions, and having seen Saxon play In The Court Of The Crimson King live (wish they would again), it’ll be nice to see one or two of these on stage.

Given the band’s roots it would have been nice to see a longer track, something a bit more progressive, and I’m surprised there’s no Sensational Alex Harvey Band and Biff has made no secret of being a fan. But that aside, it’s a lovely album and a welcome break.

This album works because of the changes of pace throughout, they’ve not tried too hard to repeat the original (Wasp’s Easy Livin’, for example), but they’ve kept an important essence of each; a boot in every camp.