In this review, we’re going to look at The Complete Albums Box Set by Judie Tzuke called Full Moon. I have been asked to review this box set before and to be honest, I had started filming it and got to the point where I was actually editing it. The thing is with anything like this, these career-defining box sets are that there are so many albums to explore that I felt that I didn’t know some of them well enough to give a good overall opinion of the box set. I have now listened to all 24 CDs and there is so much here to enjoy.

The box set itself is beautiful, and I guess like a lot of people their experience of Judie Tzuke was through the first part of her career and the albums that many of us know like Welcome To The Cruise, Sportscar, I Am The Phoenix, Shoot The Moon, Roadnoise etc. However, as I’ve got to know this box set and gone through all the albums  I have realised just what an exceptional artist she’ is. In fact, many of the albums in the eighties and the nineties and beyond to me are just sublime. They are some of the best albums she has ever done.

So first of all, let’s have a look at the box set itself. The overall design is like a large landscape hardback book. The pages are made of thick card as they contain four CDs per page. You might be thinking these are going to be quite awkward to get out, but I found it very easy and they click snugly into place. The Box Set is very sturdy and of high quality. I found it for £80 but expect to pay up to £125. If I had paid £125 for it I would still have thought It was value for money, This box set has already given me hours of listening pleasure.

Many of the albums in the set are very hard to find and can cost over £30 each so you can see what a great deal this is.

The book and essay go through her entire career. There are photos from each period, the text is candid and describes the highs and lows  (she had a few difficulties in the eighties with record labels etc). It also touches on when she was diagnosed with cancer in 2014 and her recovery and return to recording and touring.

The rest of the text then describes each album in detail. Many of the albums come with extra tracks and the remastering is just superb, What I have enjoyed so much is getting to the know the albums that were new to me I’m amazed with the quality of the music and how much time it is spending in my CD player.

There’s an album in particular called Wonderland (1985), which features Nigel Kennedy on violin and Brian May on guitar and I think it’s also one of Judie’s favourite albums,  it’s just fantastic. The production at this period is very much like Sade or Bryan Ferry. On my HiFi it sounds like the best album you have ever heard! The production is incredible.

There is so much to explore and enjoy here, just this morning I was playing one of the live albums ‘The October Road’ and it made me want to just dip into the box again so I went with ‘The Beauty of Hindsight’ with has some wonderful covers versions on it. If you are a fan of Judie Tzuke this is an essential purchase and if you have heard or streamed a few tracks and want to know more this is an ideal place to start. 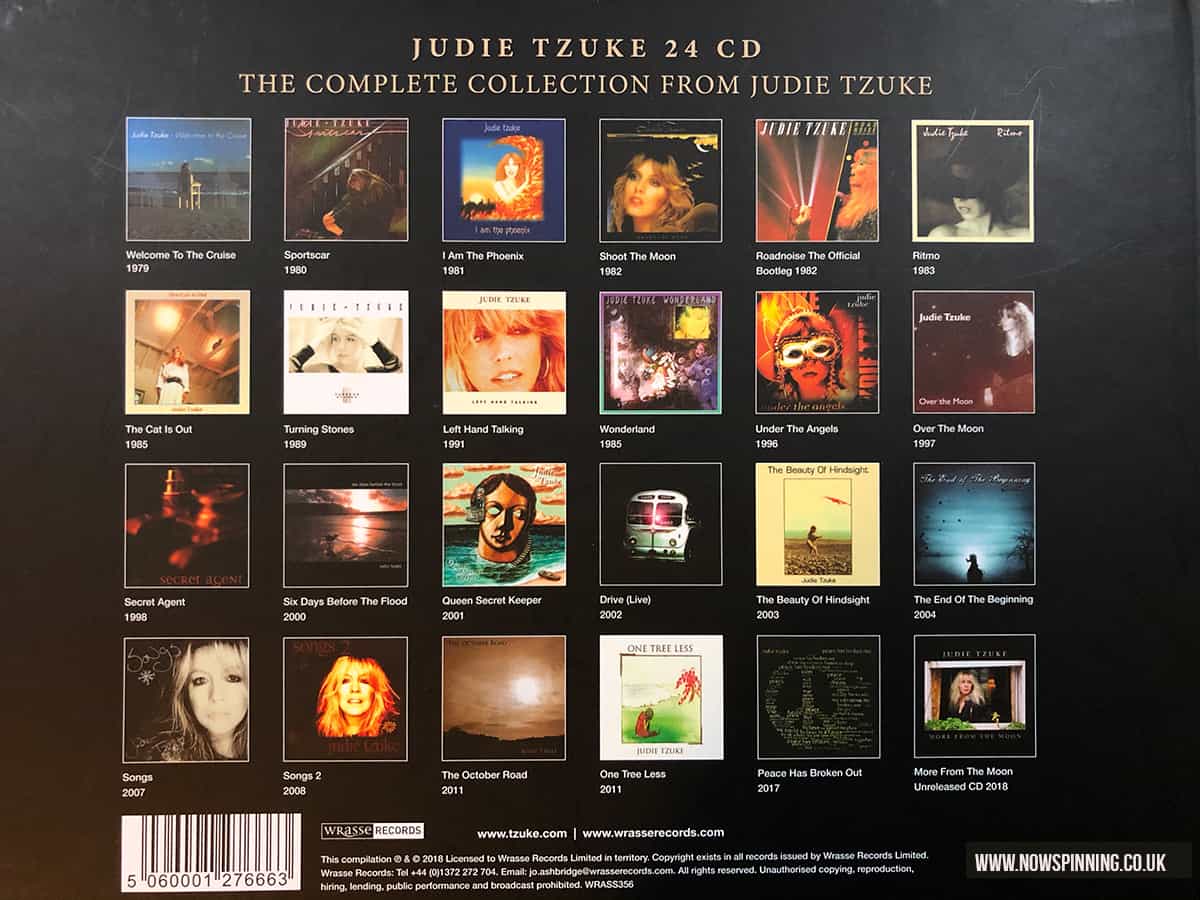