This is the first video looking at the career of guitarist and vocalist Rick Derringer. This video covers the Derringer years which are captured perfectly in this 5CD Box Set from Cherry Red Records.
I explain why he is seen by many as the bridge between Ronnie Montrose and Eddie Van Halen.

By the time Derringer decided to form a new band around his surname he was already a successful solo star. In fact, by 1976 he was already a rock n roll veteran having started is career 10 years earlier with the hit Hang On Sloopy. I mention him in the video being the bridge between Montrose and Van Halen, this will give the impression that he was all about the guitar and that would be wrong. Rick Derringer is also a fantastic vocalist and songwriter. He certainly knows how to pen a good melody and his image in the early 1970s was very much a pop/glam star.

I feel that in the mid-1970s he wanted to be seen as a more serious band and wanted to move his music in a heavier direction.  For the first four albums in this set the line up was Rick Derringer : Vocals & Guitar, Kenny Aaronson Bass & Vocals, Danny Johnson Guitar & Vocals and Vinny Appice Drums. This lasted until 1978 when the line up became a three-piece with Myron Grombacher joining on drums. Myron would later find success with Pat Benatar.

My first encounter with Derringer was via the single ‘Let Me In’ from the first album. This was backed with ‘You Can Have Me’ This opening couple of tracks were more pop-rock than the hard rock many fans of the genre were familiar with, but the album contained many highlights that showed off Rich Derringer’s talents. I know many people prefer the second studio album Sweet Evil but I feel the first is a more complete album and features some stunning guitar playing and songwriting. This is especially apparent on ‘Beyond The Universe’ ‘Comes a Woman’ and ‘Sailor’.

As good as the studio albums are it was in a live setting where Derringer really became a force to be reckoned with. In many articles from the time, there was a frustration that the band struggled to capture their live sound on the studio albums. The official live album Derringer Live and the radio promo Live in Clevland show this very well. There are some serious guitar workouts on these two albums and this alone makes this a must-buy box set for me.  During ‘Rock n Roll Hoochie Koo’ there is a solo guitar section that eventually segues into ‘You Really Got Me’ by The Kinks. This could be a coincidence but I wonder if a young Eddie Van Halen was watching or listening to this and taking notes for the future?

One of the highlights of Live in Cleveland is a blistering version of David Bowie’s Rebel Rebel. If I had to choose between the two live albums I would pick Derringer Live as this also features songs from his solo albums and ‘Sitting By The Pool’ from Sweet Evil.

The original band did split up after the release of the live album, Vinne Appice would do very well in the 1980s with Black Sabbath and then Dio. Jack Douglas who produced Sweet Evil had also been working with Cheap Trick and I cannot help but wonder if Rick Derringer had been taking notes because what came next was not that dissimilar to Cheap Trick.

The final album in this 5CD set is ‘If I Weren’t So Romantic, I’d Shoot You’ and as mentioned this very much follows the path being laid down by Cheap Trick. There is nothing wrong with this and in many ways, this style of music is exactly what made Rick stand out, he could play a soaring and flash solo and then deliver a vocal that matched every note. 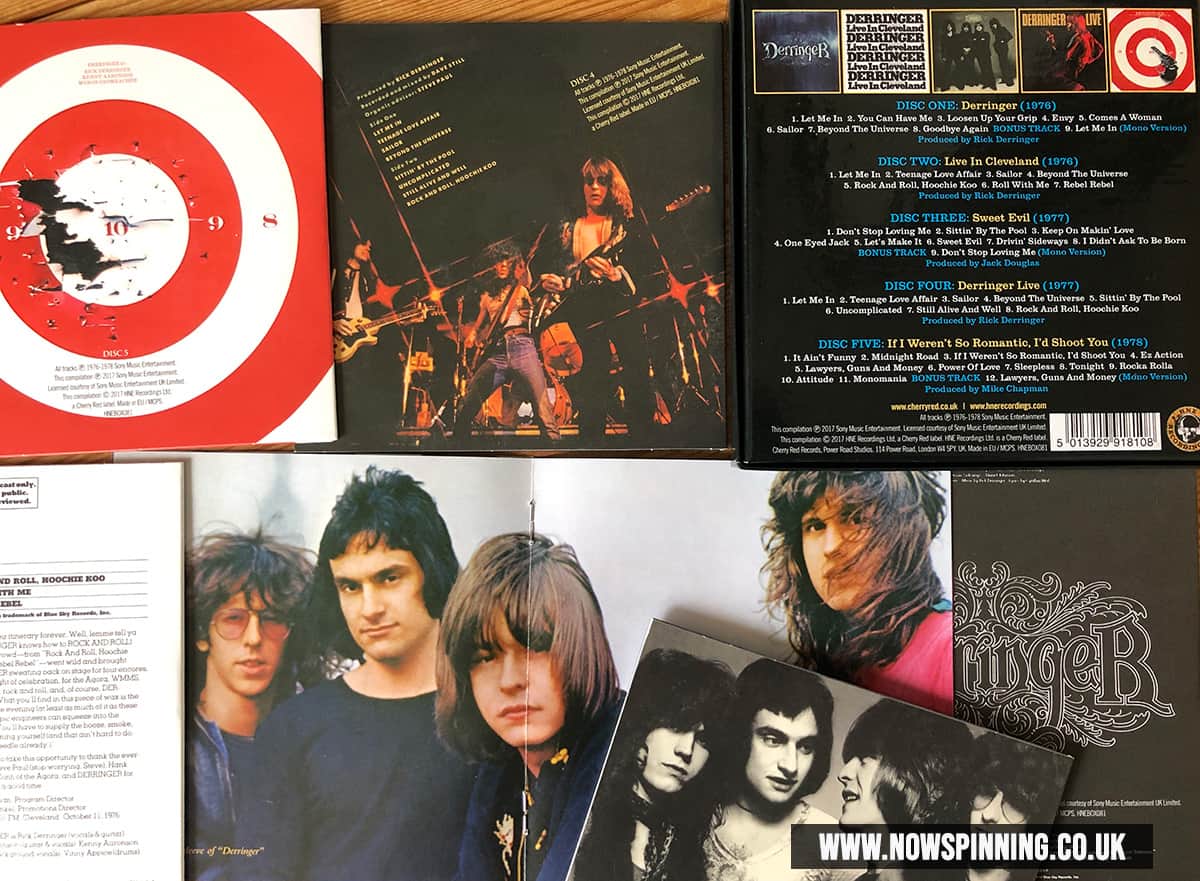