The box set was unboxed live so I had not looked inside before doing this video. You can see that there was some disappointment with the attention to detail but overall this is a good value box set.

In this video, I will be unboxing the Dire Straits Studio Album Box Set. I also talk a little about the remastering situation and compare the CDs to the current 1996 remasters.

The CDs in the box set have not been remastered and I know that means a great deal to some people. I also recognise that it is almost the first thing we think of when we hear of a new box is being released. However, in this case, 1996 remasters were always very good!

When Brothers in Arms was released for example it was picked to show off the new CD format, to me the original CDs sound very good so I can see the rationale behind them using these. This box set is not aimed at life long fans who already have these albums.

So what is the motivation for buying this Box set? For some people, it is just about the music but I think for music collectors, there’s also a design element. There is a tactile aspect and this box, it feels and looks good. It is a nice design. Of course, if you don’t have all the albums then for literally £15 pounds (which is what I picked it up for), this is an absolutely fantastic entry point into these classic Dire Straits albums.

Also in the news recently has been some artists saying they are only going to release their music on vinyl because CD is a finished format!

The fact is, as I talk about this box set Dire Straits are back in the UK album charts because of this CD Box Set. So there’s a lot of life left in this format, and I personally love it. I love vinyl, but I love CD as well. Anyway, let’s have a look inside and see what you get for your money.

So the box itself is a high-quality clamshell box. The design is great with the six albums on the back of the box, which look fabulous. So let’s see what they’ve done on the inside. The six albums fit inside and the card used is of thicker stock than those you would find in the ‘Original Albums Series box sets but not thick enough to the have the album title on the spine.

The first album is the debut Dire Straits album from 1978. Inside is the CD (there is no inner sleeve) and a fold-out poster with a picture of the band on the front and the lyrics on the other side. Now, this all fits in quite tightly and I can see that already the glue is a little unstuck and as you take the CD or poster out a few times this could get worse.

I will now compare this to the previous CD, which has a booklet with colour photos, song lyrics and an appreciation essay talking about the history on that album and the reaction to it when it was released.  This is obviously all missing on these new editions as they have tried to focus purely on creating the original vinyl release in miniature form. Next up is Communiqué, which is actually probably my favourite album by Dire Straits. The CD label mimics the American Mercury label. Whereas the original CDs show the Vertigo Label. This CD also has a fold-out sheet with a picture of the band and on the other side more pictures of the band. The older CDs all have a retrospective essay and lyrics so if you have these you will probably be keeping them!.

Making Movies has got the lyrics and a couple of photos on the back. Then we have Love Over Gold another one of my favourites actually with a foldout sheet with the lyrics on. The fold-out sheets make it easier to read the lyrics but you see as I am pulling the CD out the glue is coming undone.

Next up is Brothers in Arms which almost launched the CD format back in the day and then finally On Every Street.

So what are my thoughts?

My thoughts are I paid £15 pounds for six classic albums which is a bargain. The remastering is the same as the 1996 releases but that is fine as they sounded great anyway.

It obviously does not take up as much room as 6CD in jewel cases but a bit more attention to detail on the packaging would have been nice. Even while filming this video it is obvious that the album sleeves are going to come undone and you can see that the glue is a bit poor

Paul from Super Deluxe Edition mentioned a similar thing and some of the Amazon reviews also, mention this.  But for the money and if you are new to the band or just want to have all the albums in one place this is a bargain set. 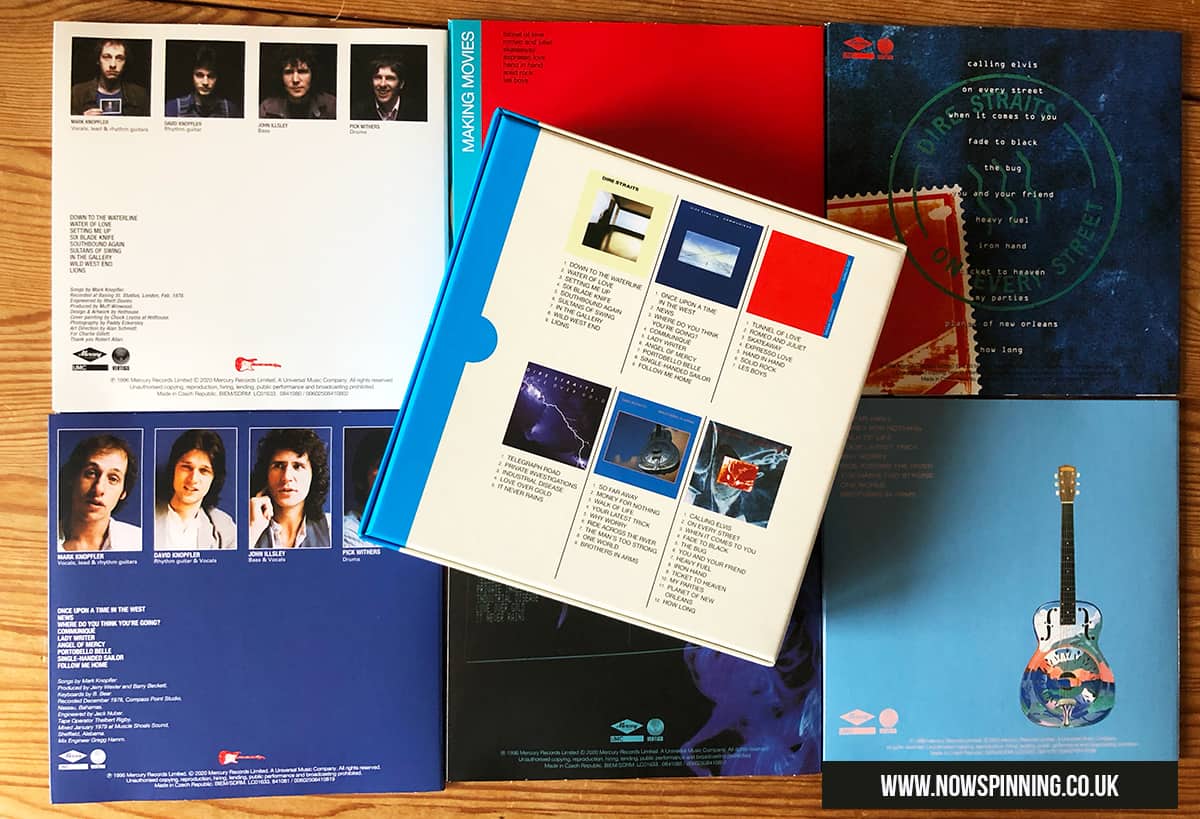 All the points you make are spot on Phil. Yes a great price think I paid £16.99 on pre order. I suspect we will be seeing more packages like this in the near future. Thanks for the review Phil.