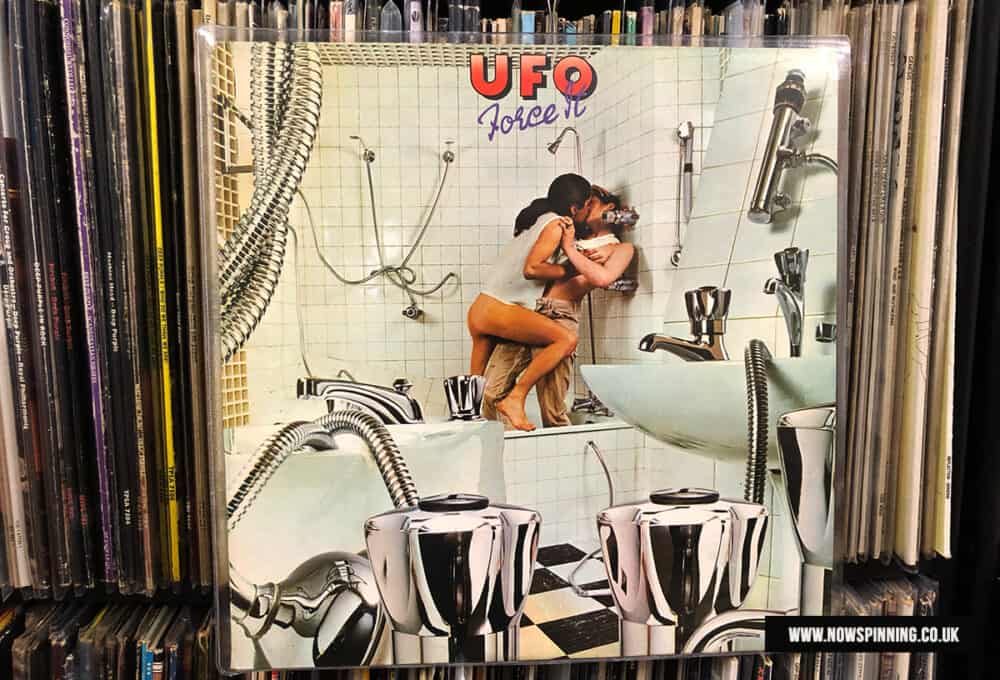 Or how I discovered UFO

Recently on the Now Spinning Facebook Group we had a Weekend Theme where we looked at albums that we took a risk on, basically buying records that we’d never heard anything from. So it had to be something that we just took a chance on. in 1975,  I just left school and got my first job so buying albums was a potentially expensive affair on my Apprentice wages.

One of the things I remember was when I used to meet my friends on a Saturday night was always trying to say I had discovered something new, a new band or album, and perhaps introduce them to something that I had discovered. One of those bands was by UFO and the album was Force It (1975).

When I used to go to a record shop in those days. I used to look through every single letter of the alphabet so I would go from A – Z and through various artists as well. This was the best way of discovering new music. Back then there was no internet. There was no way of seeing a video or hearing anything without buying it first. You had to rely on one of your mates already having a copy. Rock radio did not really exist in the mid-70s, John Peel had moved on to other things so it was either Alan Freeman on his Saturday afternoon request show or perhaps reading a review in Sounds, Melody Maker, N.M.E or Record Mirror.

However, lots of bands still fell through the net and with no coverage the only way you found out they existed was from browsing through the racks at your local record shop and the sleeve design catching your interest. So on this particular Saturday morning, that is how I came across Force It by UFO.

I picked it up because the cover by Hipgnosis featured a half-naked couple of non-specified gender, kissing in a bathtub! It was a striking cover and it caught my interest enough to pick it up. I turned it over and looked at the back cover, looking at the live band photos, I thought this looks like a rock band.  The imagery of an album was probably the closest you could get without hearing it a record to give you a clue about what was contained within the grooves. So the picture of Pete Way, Phil Mogg,  Michael Schenker and Andy Parker suggested, this was indeed a rock band. The song titles also seemed to back this up. So I decided to take a chance and buy it thinking that at the very least it would be worth seeing my Mum and Dad’s face when I walk in with this under my arm!

So I got home and put it on the turntable, as the needle lowered down it found the first track Let It Roll which starts with feedback from Michael Schenker’s Flying V guitar and then launches into a really powerful driving rock song. I was impressed already but as another inventive riff marks the start of the instrumental section it then changes into a totally different track with a melodic middle eight, layered guitars with a guitar sound that in 1975 felt totally unique.

I was really into Ritchie Blackmore Jimmy Page, Ronnie Montrose, Paul Kossoff etc but this guy Michael Schenker also had his own sound and as my tastes were getting heavier it ticked all the boxes for me. Not only was this guy really fast he was also very melodic and played with real feeling.

Next up was Shoot Shoot. Great simple riff but another solid driving song. Here again, the song contained elements that were not expected, I just loved these extra riffs Schenker put into the songs. Other bands would have kept them back for another song!.

The third song in is High Flyer which is more of a ballad but the guitar solo from Schenker is just perfect, the tone and vibrato full of feeling and emotion to match Phil Mogg’s powerful vocal performance. This is followed by Love Lost Love and then the final track on side one Out In The Street which starts off with a keyboard introduction by Chick Churchill from Ten Years After. This song became a live favourite and I remember seeing them do this on the Old Grey Whistle Test the following year.

Then on Side Two is my favourite track from the album Mother Mary. This starts with a really heavy and mid-paced guitar riff. The song is full of menace but also very melodic, again the song features additional riffs which could have been other songs!

Too Much Of Nothing is next composed entirely by Pete Way. This was the song I possibly felt showed a dip in quality at the time, but this was probably because it did not feature another blistering solo from Michael Schenker.

Last but one is Dance Your Life Away which starts with quite a funky riff and again moves into another Schenker tour de force.

Finally, the album closes with the epic This Kids (Including Between The Walls). This track is a real Heavy Metal workout with everything in it, even the slowed down Quo (ish) blues section is great with some great blues licks from Schenker but it is the segue to Between The Walls that sealed the genius of Michale Schenker for me. The haunting chord sequence and the amazing guitar solo that emanates from Schenker’s Flying V is just spellbinding.

“Schenker was barely of this earth. If he came up with a particularly great guitar solo we would simply write a song around it” Phil Mogg

This was my first exposure to the music of UFO, I was an immediate fan and then (very successfully) introduced them to many of my friends. I bought Phenomena next and then waiting patiently for the release of No Heavy Petting in 1976.

I am going to recommend the 2007 Remastered Edtion on CD. This was remastered by Peter Mew at Abbey Road with the release coordinated by Rock Candy.

This is one of these cases where the remastered CD sounds far superior to the original vinyl release. Leo Lyons who produced the original album certainly got a great guitar and vocal sounds but the drums especially always sounded a bit flat. I remember playing this album to some AOR fans in the 1980s and compared with the sound coming out of rock albums from that period it sounded quite tired. If you compare the sound of Force It to The Wild Willing and The Innocent you will now what I mean.

The sound difference in the sound on the remastered CD version is just incredible. The depth of the bass and the drum sound now does the songs justice. Sometimes you can read remastered and not really pick up any difference, but with the Leo Lyons UFO produced albums the difference is very much improved, making the album sound like it was released last week!

The 2007 CD also comes with an unreleased track A Million Miles and five live tracks. 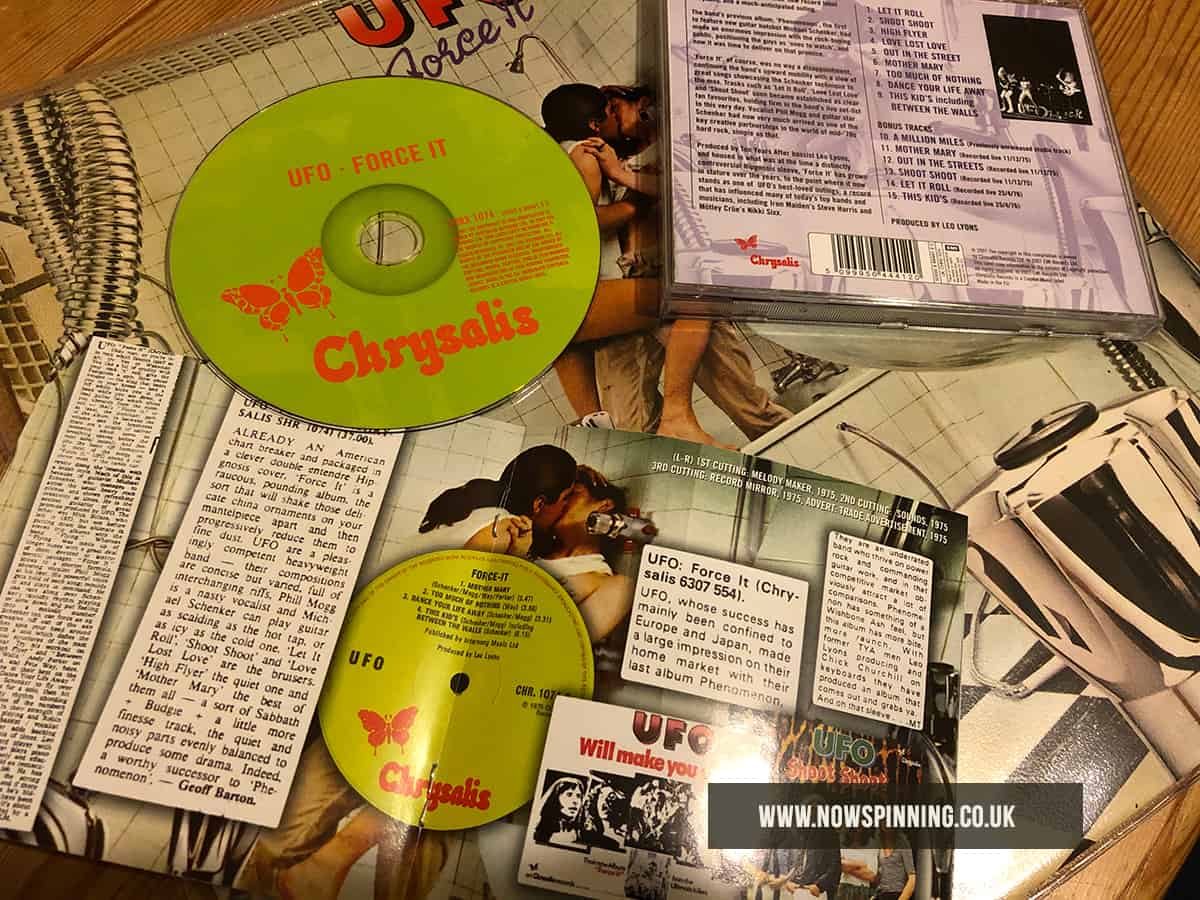 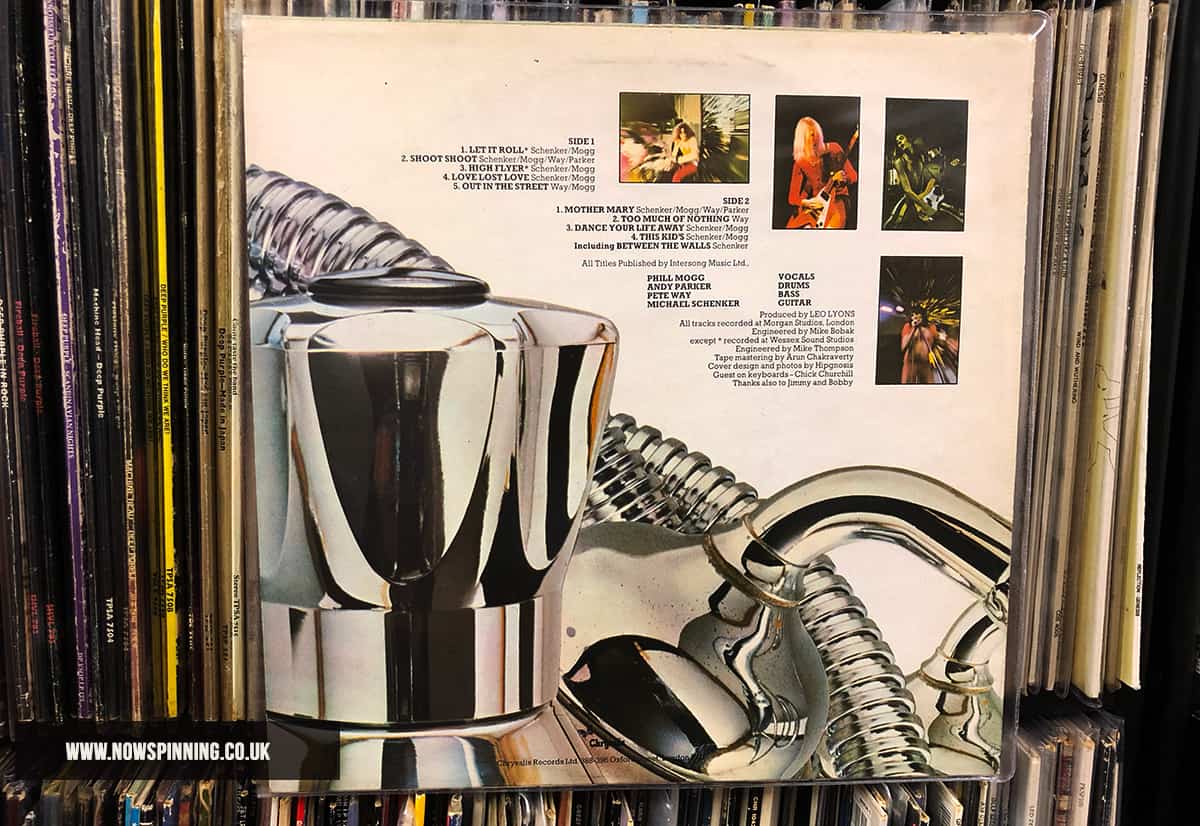 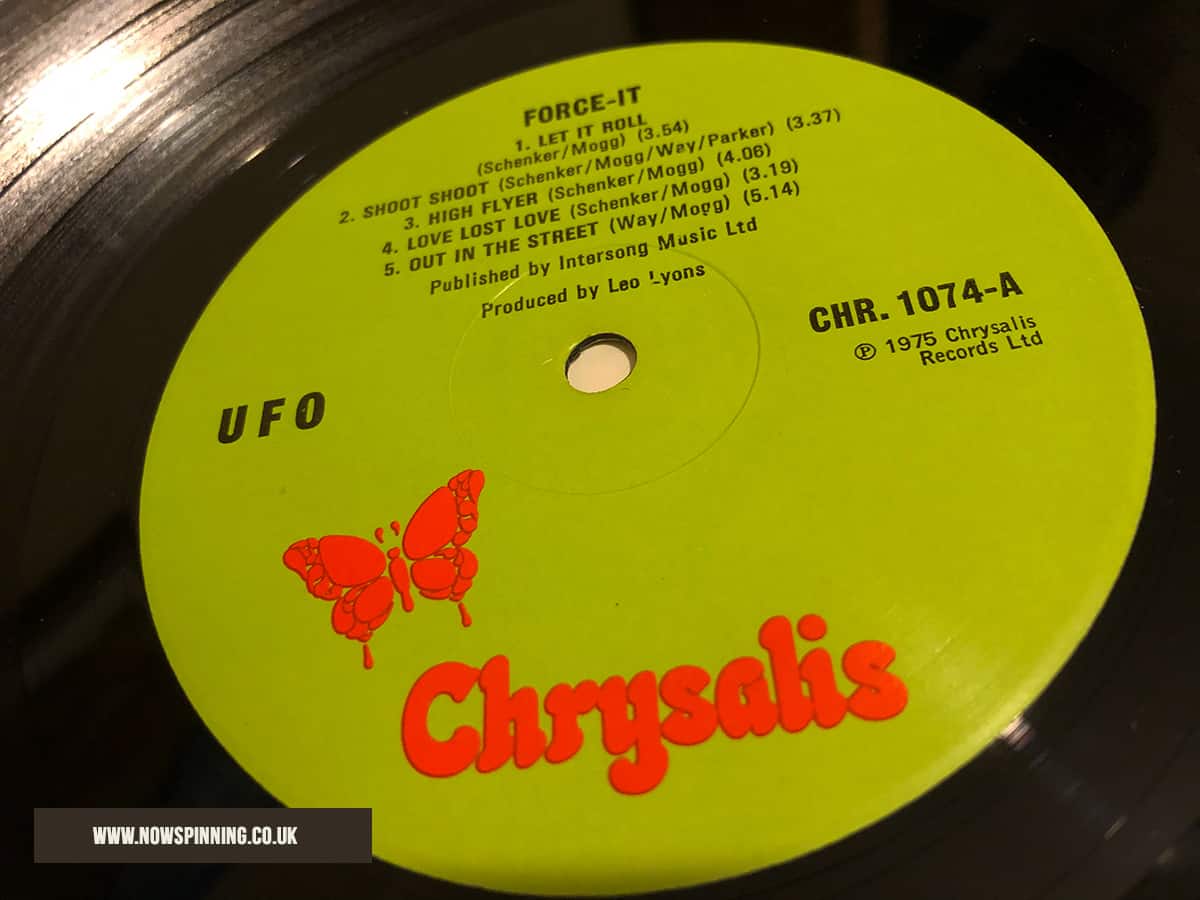 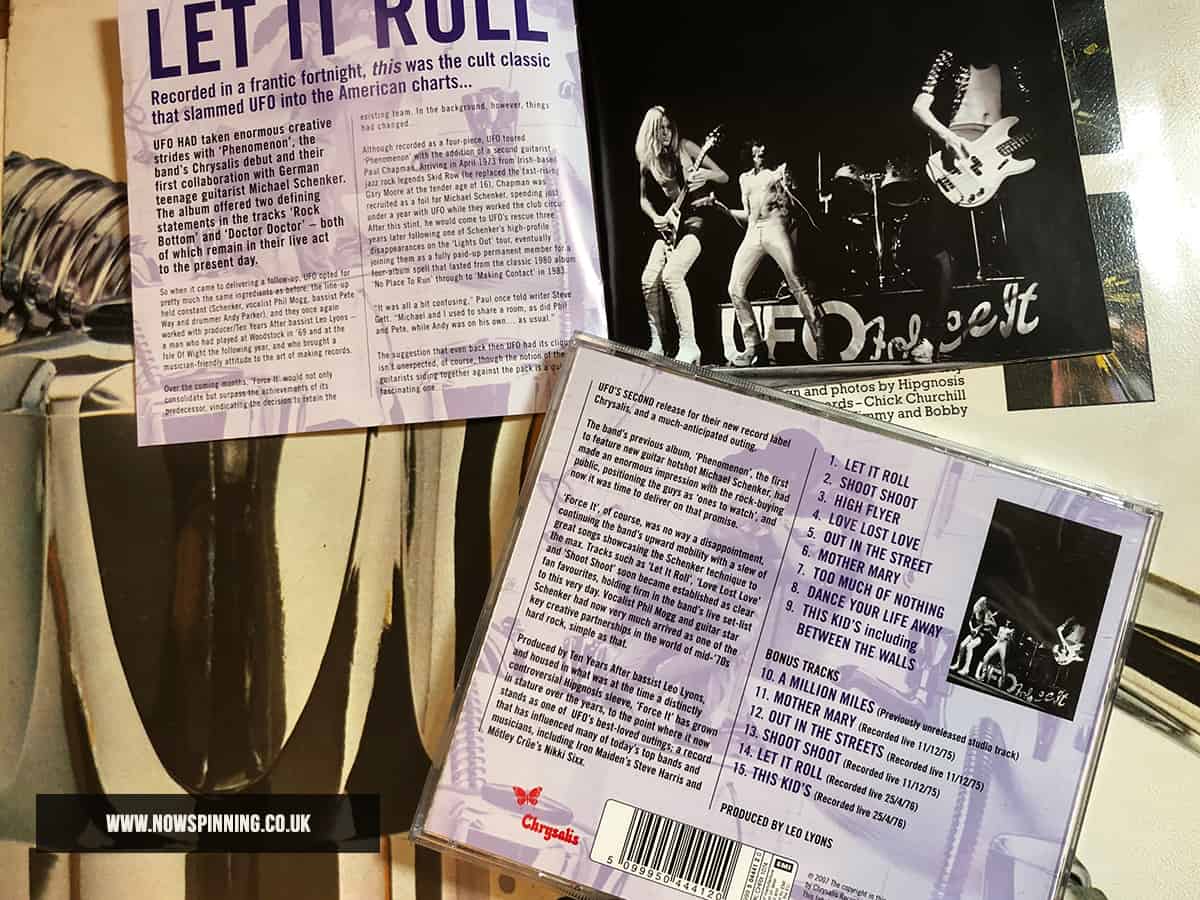